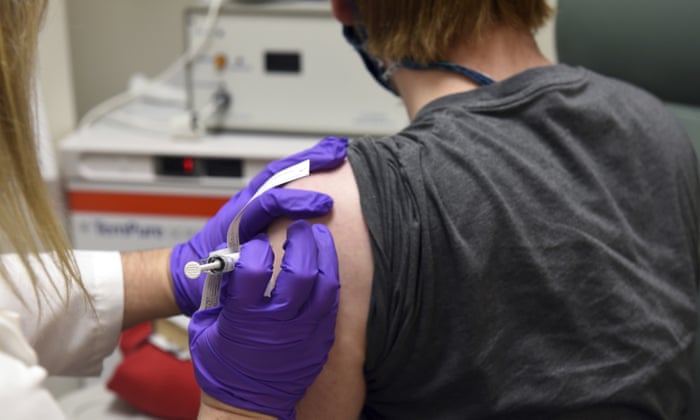 What’s happened – is this a breakthrough?

Pfizer and the German biotech company BioNTech said on Monday that they had had encouraging early results from a phase 3 clinical trial of their coronavirus vaccine. The trial is assessing how well the vaccine works in preventing humans from becoming infected. Although details are scant, the news is positive.

What are the new results?

Pfizer and BioNTech say they looked at 94 cases of coronavirus that occurred among participants after they had received two shots of either the vaccine or the placebo, and found that the vaccine was more than 90% effective at seven days after the second dose. As the two doses are spaced by three weeks, the team behind the vaccine say their results suggest protection is achieved 28 days after the initiation of the vaccination.

They also found no signs of safety concerns, and stressed that the participants were from diverse backgrounds – an important consideration given that black and ethnic minority groups appear to be at greater risk from the virus.

Regulators have previously said they would give the green light to a vaccine that has at least a 50% effectiveness rate, a bar this vaccine looks on course to exceed.

How does this vaccine work?

The vaccine in question is based on genetic material called mRNA that enables the production of the “spike proteins” that sit on the outside of the coronavirus. The vaccine introduces this mRNA to the human body, triggering human cells to produce the spike protein. In response to these proteins, the body produces antibodies, and other immune pathways are activated, guarding against infection.

How excited should we be?

Most experts agree that the results are exciting and excellent news, but the optimism should come with a note of caution: the results are preliminary, have been shared only by press release, and the trials are not yet complete.

So far, 38,955 people have received two doses of the vaccine, and the team plan a further analysis of the results once a total of 164 confirmed Covid-19 cases have occurred among the participants. They will also follow participants for two years post-vaccination to explore long-term safety and whether it continues to provide protection.

There are certainly still many questions that need to be answered, including how long protection via the vaccine might last, whether it protects those who have previously had coronavirus, and whether it prevents people from catching the virus and passing it on or simply reduces the severity of symptoms.

There are also logistical challenges, not least as the vaccine needs to be stored at -80C, meaning that even in developed countries there could be difficulties in distributing the jab.

However, the results so far are very encouraging. What’s more, if successful, the vaccine would be the first licensed jab to be based on mRNA, a development that could fuel the emergence of new vaccines for other diseases. It would also set a record for the shortest time taken to develop an effective vaccine from scratch.

How soon could it be available in the UK and globally?

There is some way to go before the vaccine will be available, as it must be approved by licensing authorities. Pfizer has said it plans to apply to the US Food and Drug Administration (FDA) for emergency approval as soon as safety data allows, possibly as soon as the third week of November.

In the UK, Boris Johnson’s spokesman has said the UK has secured 40m doses of the vaccine, 10m of which are due to be available before the end of the year assuming no snags.

But the logistical requirements mentioned above, such as cold storage, mean there could be problems rolling out the vaccine in countries with poorer health infrastructure or where electricity supply is unreliable, or in some rural areas.

In addition, while demand has been anticipated, a huge level of production will be required, and then there is the matter of who gets the vaccine first and how mass vaccination would be rolled out.

And what about the other vaccines – is Oxford far behind?

There are more than 170 vaccines in development, 11 of which are in phase 3 efficacy trials – including an mRNA vaccine from the US company Moderna, and the Oxford University/AstraZeneca vaccine. The latter uses a different strategy to the Pfizer/BioNTech approach, delivering the gene for the spike protein to human cells via a chimpanzee cold virus that has been changed so it cannot grow and cause an infection. The results from this vaccine trial are expected in a matter of weeks.