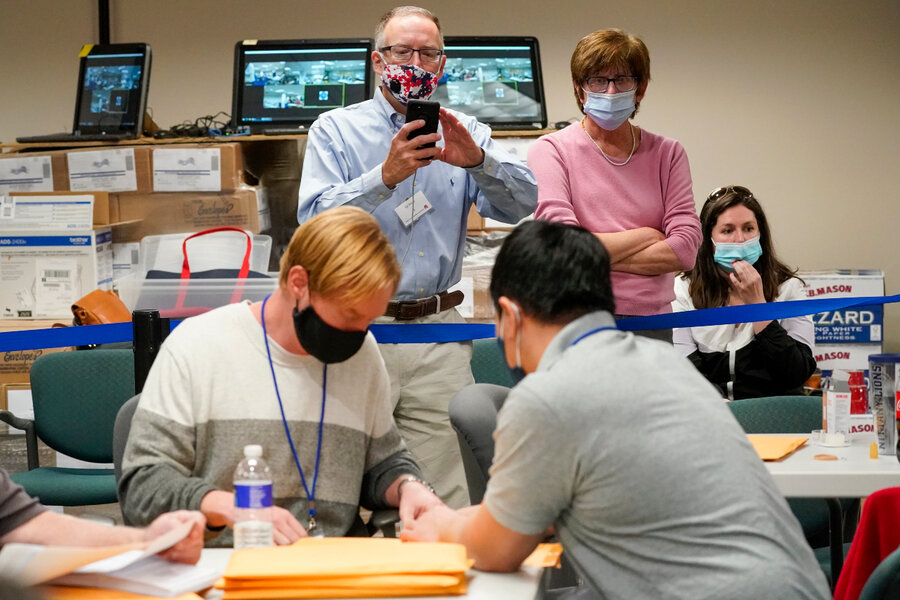 As Election Day ground on into “election week,” late-counted ballots in Nevada, Pennsylvania, and Georgia continued to keep Democrat Joe Biden in the lead and offered him multiple paths to victory.

On Saturday, Mr. Biden captured the presidency when The Associated Press declared him the victor in his native Pennsylvania at 11:25 a.m. EST. That got him the state’s 20 electoral votes, which pushed him over the 270 electoral-vote threshold needed to prevail.

The former vice president carved a path to the White House by recapturing Democrats’ “blue wall,” a trio of Great Lakes states – Pennsylvania, Wisconsin and Michigan – that President Donald Trump narrowly won in 2016. Those states had long served as a bulwark against Republican presidential candidates.

But he also made historic gains in the Sun Belt, becoming the first Democrat to win Arizona since 1996. He also held a narrow lead of more than 7,000 votes on Saturday in Georgia, where a Democrat hasn’t won since 1992.

Democrats entered Election Day confident that Mr. Biden would win. But their hopes for a landslide that would quickly repudiate Trumpism – something that polls helped amplify – did not materialize.

Florida, the president’s adopted state and one of the largest electoral prizes, went for Mr. Trump on Tuesday.

An early lead in North Carolina for Mr. Biden eroded as Mr. Trump continues to hold a narrow lead there, though the race is still too early to call and mail in ballots postmarked by the Nov. 3 election day can still be counted until Thursday.

On Election Night, both candidates stacked up wins in predictable places. Mr. Biden won the West Coast, and carried Democratic states in New England and the mid Atlantic. Mr. Trump won much of the South, Texas, and rural, sparsely populated states in the Mountain West and Midwest.

Mr. Biden’s win in Pennsylvania was a dramatic, though not unexpected, turn after Mr. Trump jumped out to an early Election Day lead of 675,000 votes and prematurely declared he had won the state.

Over coming days, as local elections officials tabulated more ballots, Mr. Trump’s lead dropped sharply, with Mr. Biden winning roughly 75 percent of the mail-in vote between Wednesday and Friday, according to an analysis by the AP.

By Saturday afternoon, Mr. Biden’s lead in the state had climbed to over 34,000 votes, an edge over Mr. Trump of 0.51 percentage points that placed him outside the margin for a mandatory recount.

Under Pennsylvania law, a recount is automatic when the margin between two candidates in a statewide race is less than 0.5 percentage points. Mr. Biden’s lead over Mr. Trump was on track to stay outside of that margin as final votes are counted.

As more votes were released Saturday that solidified Mr. Biden’s lead, an AP analysis of a small set of provisional ballots from Trump-leaning counties showed Mr. Trump was winning them by a smaller margin than his Election Day vote totals in those counties.

And the slow-going nature of the vote count? Blame the coronavirus pandemic.

The election led to widespread use of mail voting for the first time in many states.

Though five states conducted elections by mail before the pandemic, most did not. Concern that voters could catch the virus by waiting in line at crowded polling sites led election officials across the United States to scramble to quickly adopt the voting practice.

But mail ballots also take a long time to verify, process and count, delaying the tally.

Mr. Trump, who refused Saturday to concede the race, prematurely declared victory during a news conference at the White House early Wednesday morning, arguing that he was ahead and “it’s not like, ‘Oh, it’s close.’”

But as mail ballots continued to be counted they overwhelmingly favored Mr. Biden, in part because Mr. Trump has discouraged his supporters from voting that way.