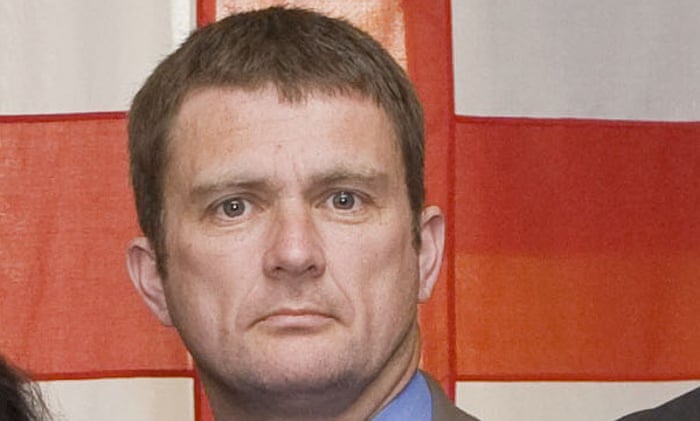 An Essex councillor from the far-right organisation For Britain has been sanctioned for breaching his council’s code of conduct after being accused of inciting racial hatred in an anti-asylum seeker video he posted on YouTube.

A series of sanctions against For Britain councillor Julian Leppert were agreed at a meeting of Epping Forest district council on Tuesday.

Leppert posted a video, which can still be seen on YouTube, in July called The Epping Migrant Hotel Scandal. He appears on the video with Eddy Butler, the BNP’s former election chief.

The video claimed that the 79-room Bell Hotel in Epping, which the Home Office was using to accommodate asylum seekers, was being used by asylum seekers and illegal immigrants who had come to the UK to exploit the benefits system, that the asylum seekers posed a security risk to local people, had caused an increase in shoplifting and pickpocketing and had diverted food intended for local people at the food bank 3food4U to their hotel.

When questioned about these claims at a meeting of the council’s standards committee on Tuesday evening Leppert was unable to substantiate any of the allegations.

When asked what would be an acceptable number of asylum seekers to be housed in the area he replied: “None.”

Leppert was attacking the asylum seekers housed by the Home Office in the Bell Hotel at a time when other far-right groups were entering hotels accommodating asylum seekers and harassing them.

When asked previously by the Observer if he was advocating a whites-only enclave in the area, he replied: “Ideally, yeah.”

The council received seven complaints about the video, four from members of the public, one from a doctor who had a patient at the Bell hotel, one from a councillor and one from the Helen Bamber Foundation, a charity that provides support to asylum seekers.

The doctor said that her patient who was housed in the Bell hotel and other asylum seekers there had experienced racist abuse from local groups, which she believed was as a result of the YouTube video. According to a report to the council’s committee “she said that the video had included the spreading of lies to incite hatred.”

A report to tonight’s committee said: “Councillors are representatives of the council and the public will see their actions as being an illustration of the views of the council.”

But the report added that these views were not shared by the council.

Leppert invoked his right to freedom of opinion under the UN Declaration of Human Rights.

“Many of my political colleagues are all for human rights with regard to asylum seekers and illegal immigrants but when it comes to British people not so much,” he said.

He described the meeting where the sanctions against him were agreed as “a politically motivated kangaroo court”. He admitted to not having read the council’s code of conduct although he had signed it.

The sanctions agreed against him by his fellow councillors include a formal censure and a requirement to undergo equality and diversity training.

Zoe Dexter, welfare and housing manager at the Helen Bamber Foundation, said after the meeting: “People seeking asylum, many of whom are exceptionally vulnerable, have the right to pursue their asylum claim in the UK, and to do this free from abuse. The far-right protests and actions around asylum accommodation this summer were racist and stoked hate against asylum seekers. The councillor’s actions were unacceptable, particularly from someone in public office, and we welcome the council’s decision to find that he has broken their code of conduct. “

Pfizer Covid vaccine: what has the trial found and is this a breakthrough?