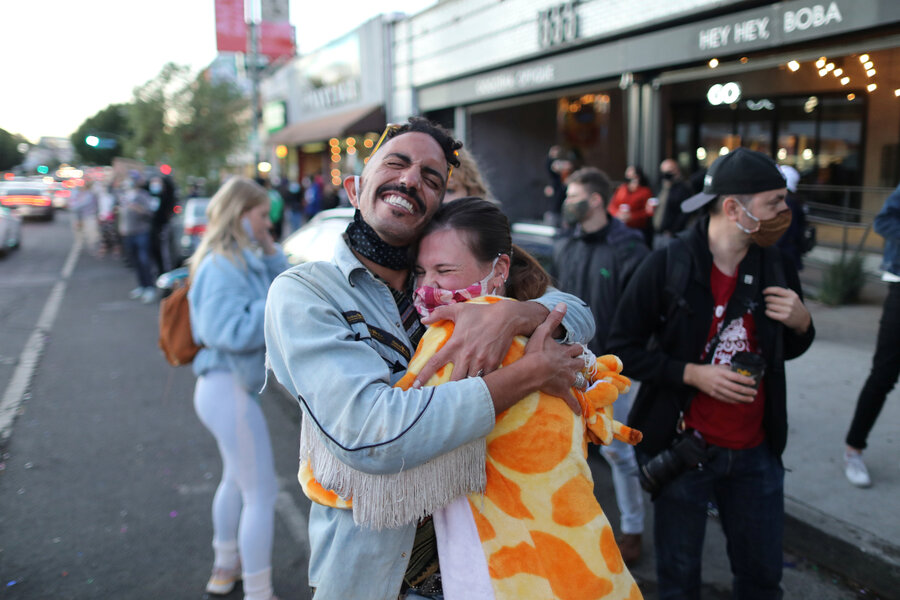 As soon as the news buzzed on their phones, Americans gathered spontaneously on street corners and front lawns – honking their horns, banging pots and pans, starting impromptu dance parties – as a vitriolic election and exhausting four-day wait for results came to an end Saturday morning. And for all that joy, there was equal parts anger and mistrust on the other side.

Across the United States, the dramatic conclusion of the 2020 election was cathartic. Just after The Associated Press and other news organizations declared that former Vice President Joe Biden beat President Donald Trump, fireworks erupted in Atlanta. In Maine, a band playing at a farmers’ market broke into the Battle Hymn of the Republic.

People waved Biden signs from car windows and balconies, and a massive pro-Biden crowd gathered in the streets outside the White House. In New York City, some stopped their cars wherever they happened to be, got out and danced in the streets. Car horns and bells echoed through neighborhoods across Puerto Rico. In Kansas City, Biden supporters swayed in a park to the song “Celebration” by Kool & the Gang.

Mr. Trump’s supporters have for days been protesting outside of ballot-counting operations, alleging without evidence that the slow-moving results were proof of cheating. “This isn’t over! This isn’t over! Fake news!” some shouted Saturday as about 1,000 gathered at the Georgia State Capitol after news organizations’ decision to call the election.

Frank Dobbs of Henderson, Nevada, brought a bullhorn and a Trump 2020 flag that he wrestled with in a stiff wind during a rally outside the Clark County registrar of voters office in North Las Vegas.

“It’s not over until it’s over. There’s still the courts. If ever there’s ever a time to expose widespread fraud, this is the president to do it,” Dobbs said. “The media doesn’t decide who wins the presidency. The legal voters of this country decide.”

But across America, it was mostly the Democrats taking to the streets in jubilant displays, celebrating what was to them an end to four years of constant crises, chaos, and anxiety.

The nation paused, too, to reflect on electing its first woman vice president, Kamala Harris. Amid a celebration in Berkeley, California, where Ms. Harris spent much of her childhood, Mayor Jesse Arreguin said the liberal city’s diversity and progressive values helped shape Ms. Harris into a “leader that stands for equality, empowerment and justice.”

The news for some collided with the constant churn of crises the country has faced – the coronavirus pandemic that has killed more than 236,000 Americans, the economic recession that accompanied it, gun violence and police killings that have forced a national reckoning on racism.

“America can exhale. Decency, civility and democracy won,” said Fred Guttenberg, who became an outspoken opponent of the president after his 14-year-old daughter Jaime was one of 17 slain by a gunman at Florida’s Marjory Stoneman Douglas High School in 2018. He had been sitting in front of his television since waking up Saturday, waiting for the news. He said it made him “ecstatic.”

In Minneapolis, Pardha Ponugoti visited the memorial at the street corner where George Floyd died, saying it was important to be at the Floyd memorial to mark Mr. Biden’s win. “It’s like a reminder of the problems that still exist in our society. Just because Biden is president doesn’t mean that all these systemic issues are fixed.”

For many, Nov. 7 at 11:25 a.m., became a moment of such historic magnitude that they say they will forever remember what they were doing, even those engaged in the most mundane weekend activities.

Retired teacher and school principal Kay Nicholas, was vacuuming in her home northwest of Detroit when she heard Mr. Biden had been declared the winner.

“All I could say is ‘thank God,’” she said, choking up. “It has nothing to do with Democrat or Republican. It has to do with decency. This country has got integrity and hopefully we can get decency. I think Joe Biden can do it and bring back kindness.”

Some Republican elected officials around the country began to distance themselves from Mr. Trump and urge him to accept the outcome gracefully.

The utter rejection of Mr. Biden as the legitimate president by Mr. Trump and many of his supporters appears to represent something new in American political history, said Barbara Perry, presidential studies director at the University of Virginia’s Miller Center.

“We typically haven’t had a leader who loses the presidency who then tells his followers, `This is false. This has been stolen from us,’” Perry said. “Incumbent presidents have been mad, so mad they didn’t go to the inauguration, but not like this, where they are leading those people to say this is fraudulent.”

A couple of thousand Trump supporters gathered at the Pennsylvania Capitol in Harrisburg. Pennsylvania played a crucial role in Mr. Biden’s victory.

“If we don’t stop this today, it’ll all be over,” Bruce Fields said of news organizations declaring Mr. Biden the winner. “Otherwise we can kiss freedom goodbye.”

At the Arizona Capitol in Phoenix, a crowd swelled to more than 1,000 within hours. Mr. Biden won Arizona on his way to victory in the Electoral College.

“It’s very suspicious that President Trump, with the red wave we’ve been seeing in Arizona, is struggling,” Kelli Ward, former state senator and chairwoman of the Arizona Republican Party, told boisterous pro-Trump demonstrators. “I want to know if there is any discrepancy with the numbers coming out of the machines.”

In Lansing, Michigan, about 50 Trump supporters and a smaller group of marchers carrying Black Lives Matter flags converged on the state Capitol, where they pushed, shoved and shouted at one another in a tense standoff. But within moments of the race being called, a few from both sides broke into prayer, and at least one pair hugged.