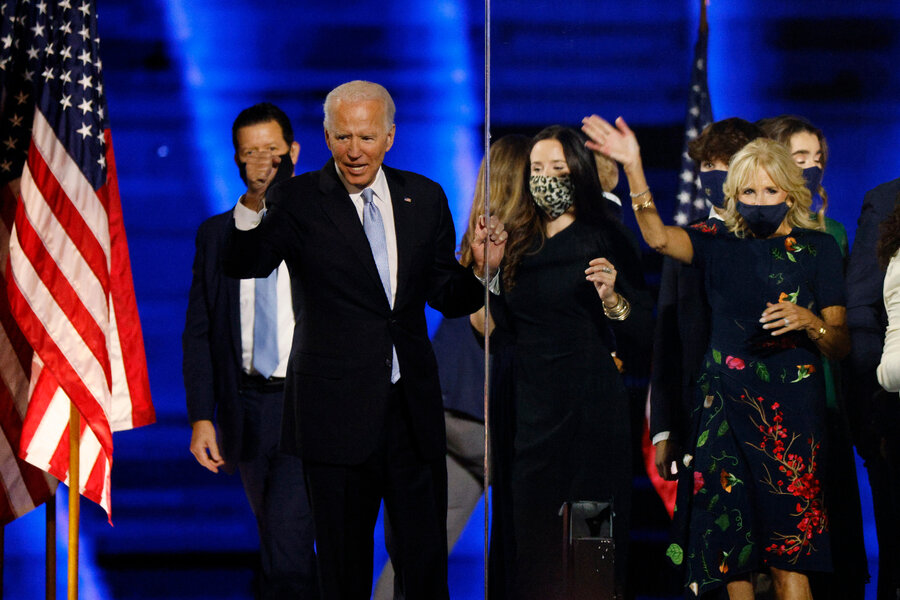 President-elect Joe Biden declared it was “time to heal” a deeply divided America in his first speech after prevailing on Saturday in a bitter election, even as President Donald Trump refused to concede.

“The people of this nation have spoken. They have delivered us a clear victory, a convincing victory,” Mr. Biden told honking and cheering supporters in a parking lot in his home town of Wilmington, Delaware, on Saturday night.

The Democrat’s victory in the battleground state of Pennsylvania put him over the threshold of 270 Electoral College votes he needed to clinch the presidency, ending four days of nail-biting suspense.

Mr. Biden pledged that as president he would seek to unify the country and “marshal the forces of decency” to battle the coronavirus pandemic, rebuild economic prosperity, secure healthcare for American families, and root out systemic racism.

Mr. Biden addressed the 70 million Americans who cast ballots in support of Trump, some of whom took to the streets on Saturday to demonstrate against the results.

“For all those of you who voted for President Trump, I understand the disappointment tonight. I’ve lost a couple times myself. But now, let’s give each other a chance. It’s time to put away the harsh rhetoric, lower the temperature, see each other again, listen to each other again,” he said.

“This is the time to heal in America.”

He also thanked Black voters, saying that even at his campaign’s lowest moments the African American community had stood up for him. “They always have my back, and I’ll have yours,” he said.

Mr. Biden was introduced by his running mate, U.S. Senator Kamala Harris, who will be the first woman, the first Black American, and the first American of Asian descent to serve as vice president.

“What a testament it is to Joe’s character that he had the audacity to break one of the most substantial barriers that exists in our country, and select a woman as his vice president,” Ms. Harris said.

Congratulations poured in from abroad, including from conservative British Prime Minister Boris Johnson, Canadian Prime Minister Justin Trudeau, and German Chancellor Angela Merkel, making it hard for Mr. Trump to push his repeated claims, without evidence, that the election was rigged against him.

Trump, who was golfing when the major television networks projected his rival had won, immediately accused Mr. Biden of “rushing to falsely pose as the winner.”

“This election is far from over,” he said in a statement.

Mr. Trump has filed a raft of lawsuits to challenge the results, but elections officials in states across the country say there has been no evidence of significant fraud, and legal experts say Mr. Trump’s efforts are unlikely to succeed.

Prior to the election, Mr. Trump refused to commit to a peaceful transfer of power if he lost, and he falsely declared victory long before counting was complete.

For Mr. Biden’s supporters, it was fitting that Pennsylvania ensured his victory. He was born in the industrial city of Scranton in the state’s northeast and, touting his middle-class credentials, secured the Democratic nomination with a promise to win back working-class voters who had supported Mr. Trump in 2016.

He launched his campaign in Pittsburgh last year and wrapped it up with a rally there on Tuesday. It was a tight race in industrial states such as Pennsylvania, Michigan, Wisconsin, and Minnesota, but Mr. Biden did enough to prevail.

Mr. Biden, who has spent half a century in public life as a U.S. senator and then vice president under Mr. Trump’s predecessor Obama, will inherit a nation in turmoil over the coronavirus pandemic and the related economic slowdown as well as protests against racism and police brutality.

Mr. Biden has said his first priority will be developing a plan to contain and recover from the pandemic, promising to improve access to testing and, unlike Trump, to heed the advice of leading public health officials and scientists.

In addition to taming the health crisis, Mr. Biden faces a huge challenge remedying the economic hardship caused by the pandemic. Some 10 million Americans thrown out of work during coronavirus lockdowns remain idled, and federal relief programs have expired.

Despite his victory, Mr. Biden will have failed to deliver the sweeping repudiation to Mr. Trump that Democrats had hoped for, reflecting the deep support the president still retains.

This could complicate Mr. Biden’s campaign promises to reverse key parts of Mr. Trump’s legacy. These include deep Trump tax cuts that especially benefited corporations and the wealthy, hardline immigration policies, efforts to dismantle the 2010 Obamacare healthcare law, and Mr. Trump’s abandonment of such international agreements as the Paris climate accord and Iran nuclear deal.

Should Republicans keep control of the U.S. Senate, they would likely block large parts of Mr. Biden’s legislative agenda, including expanding healthcare and fighting climate change. That prospect could depend on the outcome of four undecided Senate races, including two in Georgia that will not be resolved until runoffs in January.