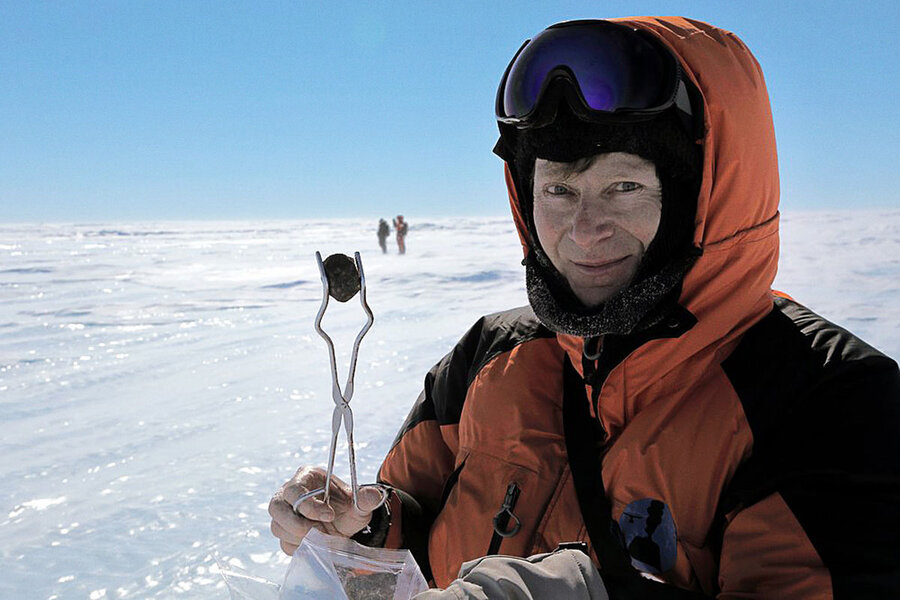 “Fireball: Visitors from Darker Worlds” is an awestruck movie about awe. A globe-spanning documentary co-directed by Werner Herzog and University of Cambridge scientist Clive Oppenheimer, it’s about how extraterrestrial rocks have literally shaped not only the Earth but the culture and dreams of its inhabitants.

Herzog is one of the greatest living filmmakers, both for his dramas and documentaries. “Fireball” is his second collaboration with Oppenheimer – the first was 2016’s “Into the Inferno,” about volcanoes. The two men complement each other perfectly: Herzog, who provides the film’s sinuously somnolent voice-over narration in his best Bavarian tones, has a mystic-rhapsodic temperament, while Oppenheimer, who, unlike Herzog, is often seen on camera, is more like a hard science David Attenborough type. For a film about “visitors from darker worlds,” both bents are necessary.

The documentary, debuting on AppleTV+ on Nov. 13, covers so many geographic locations – from the Yucatán Peninsula to Antarctica – that it also inadvertently functions as a kind of travel guide to the planet’s diversity. The filmmakers explore places where meteorites have impacted the Earth. They seek out where the fragments have been preserved and studied, monitored, and venerated. In the course of their journeys, they inevitably encounter a range of peoples whose passion for what has dropped from the sky is positively exhilarating.

We are taken to the Chicxulub Puerto village in Mexico, where some 66 million years ago the impact from an asteroid equivalent to thousands of millions of Hiroshima bombs is thought to have wiped out the planet’s dinosaurs. In Western Australia, the Wolfe Creek Crater, the site of another ancient strike, is holy ground for Indigenous peoples. The artist, Kate Darkie, who paints bright mythological panoramas, talks about how families visit the crater to feel close to their ancestors.

In Mecca, Saudia Arabia, Herzog was able to procure amateur footage of Islamic worshippers crowding inside the Grand Mosque to touch the sacred black stone that many assume is a chunk of meteorite and which the faithful believe was brought from heaven by the archangel Gabriel.

Alsace, in France, is where a gigantic meteorite hit in 1492, a scant seven days after Columbus arrived in the Caribbean. It solidified the realm of Maximilian I because it was taken as a sign that God approved of his rule.

The Princeton physicist Paul Steinhardt explains, in tones of measured ecstasy, how he discovered after long investigation a five-fold symmetry in meteorological quasicrystals, a structure previously thought to be mathematically impossible. In the Center for Meteorite Studies at Arizona State University, Oppenheimer is jitteringly allowed to handle some weighty rock samples.

Throughout this cavalcade, Herzog displays his trademark dour puckishness. When an Indian scientist suggests that every element in our bodies was synthesized in the stars, his mock-indignant response quickly follows: “I am not stardust. I’m Bavarian!” But he also thrills to the magnified stained glass window-like images of micrometeorites, which he calls “the most beautiful sculptures on God’s planet.”

Perhaps the most excitable and wide-rangingly philosophical of those interviewed in “Fireball” is the planetary scientist Brother Guy Consolmagno, who resides in the Palace of the Castel Gandolfo, the summer home of the pope. Speaking of the miraculousness of the heavens, he says that “to have the ability to understand these things is itself a miracle.” He goes on: “Looking at the stars gives you that sense of out-of-yourself that you need in order to be ready to encounter a god.”

The documentary ends with a sacred tribal dance performed for the filmmakers and inhabitants of tiny Mer Island, located in an archipelago between Australia and New Guinea. The last image that we see are lit torches shooting embers, representing the souls of departed islanders, into the night sky. It’s a transcendental finale to a transporting film.