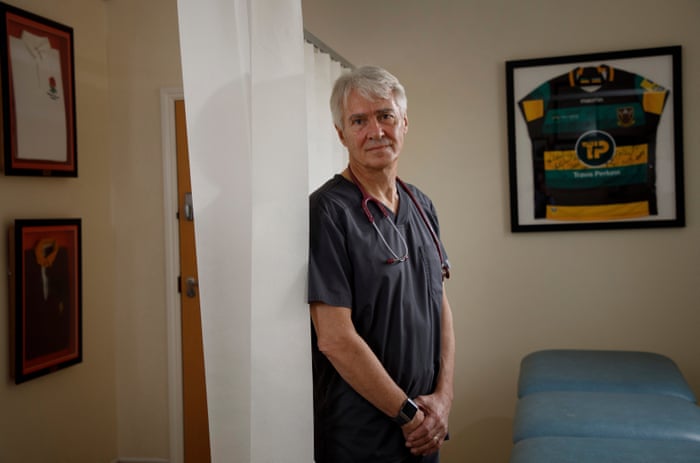 “It’s incredible that sports medicine has only been recognised the last 15 years,” Bill Ribbans says as he reflects on his four decades of work as an orthopaedic surgeon and doctor across eight professional sports. Ribbans has offered surgical or medical care to Olympic and world champions – from Greg Rutherford and Paula Radcliffe to Michael Schumacher and Jessica Ennis-Hill – while also working for the British Boxing Board of Control, Northampton Saints, Northamptonshire cricket club and England’s rugby union team.

At his clinic in Northampton, Ribbans is calm and eloquent whether detailing urgent issues of player welfare in rugby or describing the ethical issues a doctor encounters in professional sport as they come under pressure from managers and coaches in an increasingly litigious world. Ribbans works for the NHS, and at his own private practice, and it is striking he should have done so much in sport for free.

“I used to get 25 quid for working ringside at a boxing promotion but this is the first year I’ve received a stipend for working in sport, and it’s from Northamptonshire cricket,” he reveals with a wry smile. It has offered him an independence which means he can temper his innate love of sport with a critical eye. Ribbans has now written a book which provides “a surgeon’s perspective from the sharp end of sport”. It is a vast and detailed work which also tracks the way that sport has changed.

“In 1997,” Ribbans recalls, “the Bath Rugby doctor said: ‘Last year I was the only professional in an amateur sport and now I’m the only amateur in a professional sport.’ Sport has changed dramatically. Obviously, by turning professional, players make a good living and it increases their potential for earnings after rugby. No one wants to deny them that. But we need to get the balance right between performance and player welfare. All medics need that quiet confidence to stand up to the pressures that come from the manager, the agent and parents. Without it, you can lose your moral compass.”

Rugby is Ribbans’s favourite sport and, as a doctor, he helped Northampton win the Premiership and the Heineken Cup and he has worked alongside coaches including Ian McGeechan, Wayne Smith and Clive Woodward. But his passion for rugby does not deter him from making a startling statement: “It could be argued that the game turning professional in 1996 was the worst thing that could have happened in terms of player welfare.”

Ribbans played at county level as a schoolboy and he argues that, “rugby, pre-1995, always had potential dangers. But back then everybody had to go to work on a Monday morning and they could only train a couple of nights a week. That held the physicality of the game in check. Once it went professional people could spend six days a week training, be in the gym, take advantage of nutrition and sports science. They turned into enormous players.”

The ensuing collisions have become so dangerous that players are in constant jeopardy. Ribbans believes changes in the way the tackle laws are interpreted have intensified the hazards. “When we played, as soon as your knee hit the ground you had to release the ball. That’s why we took people round the legs. But modern players can roll away and recycle the ball. The opposition has to try and monster people by taking them higher to gain control of the ball. It increases the regularity of double-teaming which really worries me. The first player pins the attacker and the second tackler hits him. It can lead to really nasty injuries.”

As a rugby fan Ribbans travelled to South Africa to support the Lions in 2009. The second Test in 2009 was the most brutal match he had ever seen. “When five of your 22 are detained in hospital overnight, you think: ‘Is this really where the sport should be heading?’ James Robson [the former Lions team doctor] made those comments that the balance had gone wrong. He’s highly respected and he said: ‘Rugby’s reached a tipping point.’ But it hadn’t.”

Eleven years later professional rugby players are even bigger, faster and more capable of inflicting permanent ruin on their opponents and themselves. Does rugby need protecting from itself? “In 2018 there were four deaths in French rugby, and three more in Canada, South Africa and Samoa. Head injuries, broken necks and heart attacks were to blame. It was terrible but I hope 2018 was the tipping point. There are some very committed doctors who World Rugby now listen to. But the lawyers might be the biggest catalyst for change.”

Rugby’s unsustainable workload for their leading players has spread to other sports – particularly during the pandemic. “In rugby, players like Owen Farrell and Maro Itoje face a 51-week season leading to that final Test in Johannesburg between the Lions and Springboks [next August]. It’s too much. Other sports are the same. Look at footballers. After the Euros next year we know the injury toll will be high when they come back in autumn. Then they’re going to be going to the World Cup qualifiers, and they’re bringing the Qatar World Cup forward. It’s going to end some players’ careers much earlier.

“The damage is obvious. More and more you’re having conversations with players who have arthritis. Over my career you’d see ex-players having their hip and knee replacements in their 50s and 60s. They are now in their 40s or 30s. I’ve got a lad I’ve looked after since he was a teenager. He’s in his 30s and he’s facing a shoulder replacement and his knee is not far behind.”

In his book Ribbans is scathing of leading football coaches who try to coerce their medical staff into putting performance ahead of player welfare. He also remembers how, when Northampton were relegated from the Premiership in 2007, the rugby players he had cared for complained he had not resorted to surgery often enough. “I said: ‘If I had a reputation for being Butcher Bill, I’d be very worried. I will do everything I can not to operate to get you better.’”

Boxing is different. “People in [the sport] have always been very respectful of medical views. If you did a medical check on a boxer and said ‘I don’t think they should fight’, your view was always accepted. Even the promoter who stood to lose money and the boxer who had trained so hard were always guided by the doctor. I’ve not seen that repeated to the same degree in other sports.”

Boxing presented Ribbans with his first foray into elite sport in 1981 – and he was exposed to some wild nights. “One evening [in the 1980s] I worked on a promotion at the Cafe Royal. It was one of those strange affairs where dinner is served while the boxing is on and everyone, including me, has to wear black tie. Normally you had two doctors present. One doctor sees the boxers in the dressing room while the other is ringside. That night I realised the other doctor was not coming. It was pre-mobile [phone] days so we couldn’t track him down.

“The question was do we cancel the whole evening with all the diners there? I agreed with the promoter and the board of control that we would slow everything down. That would allow me to see the boxers after a fight, make sure they’re OK, and then we’d start the next one when I was ringside. But four of the boxers needed suturing, so the crowd were getting restless, slow-handclapping because they wanted me to stitch faster. I got blood all down the front of me and missed the dinner.”

Ribbans smiles at the memory – as he does when remembering his contrasting experience at the peak of Formula One. In 1999, while trying to win a first drivers’ world championship for Ferrari, Michael Schumacher crashed into a Silverstone wall after his brakes failed at 191mph. He had broken a tibia and fibula and Ribbans knew he needed an urgent operation. However, Jean Todt, Ferrari’s team principal at the time, wanted Schumacher to be flown to Paris for surgery. “Michael was very calm,” Ribbans says, “especially as there was this maelstrom around him. 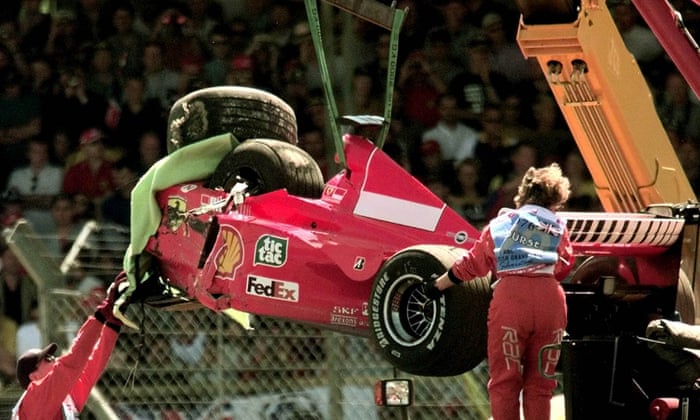 “Jean Todt poked me in the chest. I’ve no idea how he even got into the operating theatre. He said: ‘I’m paying Schumacher $16m to drive for Ferrari. For me to allow Michael to have an operation in your hospital is a big responsibility. But it’s an even bigger responsibility for you.’ The hospital chief executive was behind me. He was very pale and said: ‘You will bankrupt the hospital if this goes wrong’ – because Schumacher was an NHS patient.

“It was a nasty tibia fracture but one we see regularly. There were good medical reasons not to put Schumacher in an aeroplane to Paris but I also thought: ‘If British orthopaedics, in the form of me, can’t sort this out then that’s not a very good advert for our surgeons.’ I was really pleased we managed to do it straight away. I was home by seven that evening and it was done and dusted.”

The operation was a total success and Schumacher was delighted, inviting Ribbans and his wife to the following year’s British Grand Prix

Our Covid-world is darker now so does Ribbans feel pessimistic about the future of sport? “I do. Football and rugby clubs face the possibility of no crowds all season. That was their lifeline. I suspect they will hold on to their marquee players but the cuts will come at academy level and with support staff. That worries me.”

The decision to go into lockdown and avoid mass gatherings remains crucial. “Absolutely. As a civilised society we can’t have people dying in corridors, breathless, which is what we face if we don’t get this crisis under control. I wasn’t allowed to operate between March and July, which was difficult. I’ve been operating for a long time but we all worry about deskilling.”

Ribbans can claim a 99% success rate with the 600-700 procedures he carries out in a normal year. “I’m just beginning to wind down now so I have done less lately. But you linger over the failures more. I thought it would get easier as you get older and you’d be able to rationalise it. But I have sleepless nights about patients. You just want to do your best for them. I’m 66 this month, we’ve four grandchildren to look after, and I’m going to stop operating next March. I’ll still work as a sports doctor but I’m going to lay the scalpel down.”

He will continue being the doctor for Northamptonshire cricket team, but will he miss surgery? “I will. It’s what defines us. We curse when the phone goes on a Sunday morning because somebody is injured. But, equally, it’s nice to feel that people trust you and want you to help them.”