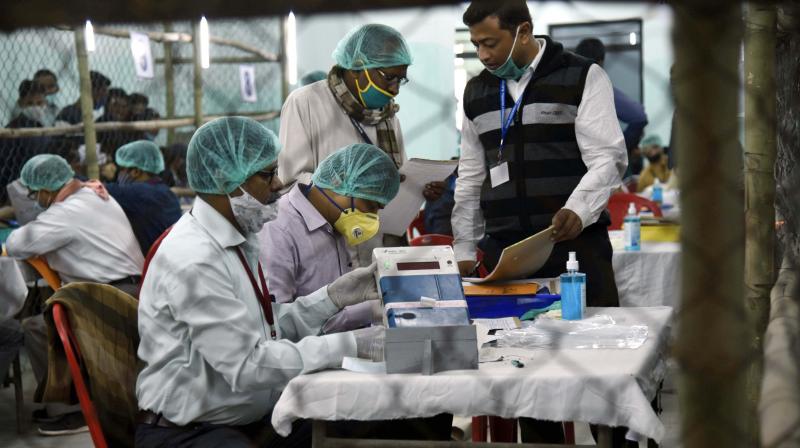 Ahmedabad: The ruling BJP in Gujarat is leading in all the eight seats while the Congress is trailing behind as counting of votes polled for the Assembly bypolls progressed on Tuesday.

The gap between the margin of votes polled by candidates of the Congress and the BJP is significant in at least five constituencies–Limbdi, Abdasa, Kaprada, Dang and Karjan.

Jayantilal Patel of Congress, who was leading from Morbi earlier in the day, has fallen behind his BJP rival Brijesh Merja who has taken a lead of over 1,000 votes, as per the Election Commission data.

In seven other seats, the BJP has been maintaining a consistent lead since this morning.

After four hours of counting, former BJP minister Kiritsinh Rana is leading by over 22,000 votes in Limbdi. In Abdasa, Pradhumansinh Jadeja of BJP is leading over 16,000 votes.

Jitu Chaudhari and Vijay Patel (both from BJP) have also taken a comfortable lead of more than 14,000 votes each over their challengers from the Congress in Kaprada and Dang, respectively.

Akshay Patel of the BJP is leading by a margin of 9,900 votes from Karjan.

While JV Kakadiya is ahead of his Congress rival by a margin of more than 5,500 votes from Dhari seat, former BJP minister Atmaram Parmar is leading with over 9,500 votes in Gadhada.

A total of 81 candidates contested the bypolls to eight seats on November 3, for which a voter turnout of 60.75 per cent was recorded.