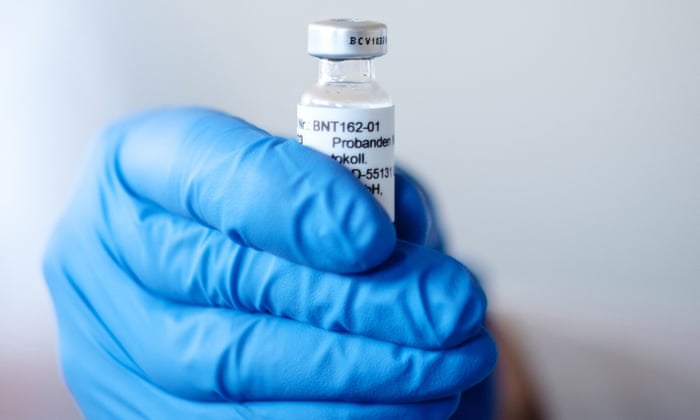 Thousands of hospital staff will join the drive to vaccinate all adults in England against coronavirus and will be deployed at mass vaccination centres, each of them aiming to give the jab to up to 5,000 people a day, NHS officials involved in the plans said.

The NHS intends to use football stadiums, town halls and conference buildings in England to inoculate at least 2,000 people per centre each day. In urban areas, there will be a network of these centres.

The new facilities will be additional to the 1,560 community-based vaccination centres run by GPs, which will each dispense 200 to 500 jabs a day. Other forms of vaccination are also planned, including mobile vans and visits to homes and prisons. All the venues will do temperature checks on people before entry allowing space for social distancing and a 15-minute recovery time.

Neither NHS England nor the government has so far published an overall projection for how many vaccinations all these venues and methods of delivery will carry out daily in total. NHS England is expected to publish its “deployment plan”, outlining the rollout, next week.

However, seconding personnel from already under-staffed hospitals to aid the vaccine rollout could lead to patients having to wait longer for care. The NHS is already facing a massive backlog of cases due to its decision to suspend most non-Covid care provision in the spring.

NHS England has asked health service heads across England to be ready to vaccinate many numbers of people at large sites not in use because of the pandemic.

The details emerged as government figures showed the UK’s Covid-19 death toll has surpassed 50,000, adding to the pressure to roll out a comprehensive vaccination programme as soon as possible.

The centres are also expected to play a key role in immunising the general public in a second phase of the vaccination programme, following the dispensing of two doses each to the estimated 22 million, including carehome residents, NHS staff and those aged 50 or over, considered a priority.

A Whitehall official explained the centres’ key role, saying: “We are looking to vaccinate as many people as is humanly possible as quickly as possible. We want to get the country back to normal as soon as possible, which would allow us to open up the economy.”

Staff from every hospital will be seconded to the vaccination campaign, which ministers see as vital to achieving their aim of reviving the economy and normalising life.

The staff, however, could be absent from their normal duties for several months, which could affect hospital services. But many NHS workers are thought to be keen to play their part in combating the virus.

Jonathan Van-Tam, England’s deputy chief medical officer, said on Wednesday that he would happily give up his free time to help administer the vaccine. “This is one of the most important, if not the most important, vaccination programme we’ve done for decades,” he said. “If I can help with this in some evenings and weekends, doing some extra vaccinations sessions myself, then I’m going to.”

District nurses, health visitors and other health professionals who do not work in hospitals will also be drafted in to help, amid concerns that, while GPs are playing the lead role in the immunisation effort, there are too few of them to deliver the NHS target of vaccinating a million people a week.

Vaccinators, who will include podiatrists and physiotherapists, will also tour areas in vans or buses and visit staff “pop-up” immunisation clinics to administer jabs. They will also offer the vaccine to people gathered for religious services.

NHS England, which is running the immunisation drive, is finalising the details of the logistics to distribute whichever vaccines are available and intends to publish its plans next week.

Although reports have said the rollout will begin on 1 December, Whitehall and NHS sources said that that was premature and it was “very unlikely” that supplies of the Pfizer vaccine, or the one being developed by Oxford University and Astra Zeneca, would be available until early 2021.

Ruth Rankine, director of the primary care network at the NHS Confederation, said that while family doctors and their staff would play the lead role in vaccination, especially in the first phase, other healthcare professionals would contribute to NHS England’s “all hands to the pump” approach, with ultimately tens of thousands of staff involved.

How the Pfizer vaccine will be distributed in the UK

The plans became public after it emerged that the UK government had spent £50m to reserve manufacturing capacity at a plant in Wales to guarantee supply of a second Covid-19 vaccine candidate being developed by Oxford University and Astra Zeneca.

The government has also secured a £50m manufacturing facility in a pharmaceutical company in north Wales for millions of doses of the Oxford vaccine and other candidates currently in the trial phase. According to a notification to the EU, the contract with CP Pharmaceuticals, in Wrexham, involves an 18-month facility “to provide for vaccine in bulk product form to be converted into individual doses capable of rollout via a mass vaccination programme”.

CP Pharmaceuticals, trading as Wockhardt, is already a big supplier of generic drugs to the NHS and has been doing trial runs for the Oxford/Astra Zeneca AZD122 candidate vaccine in anticipation of that vaccine gaining regulatory approval. A spokesman said however the facility could be involved in multiple vaccine production if the government so required.

Ravi Limaye, managing director of Wockhardt, UK, said: “We have a sophisticated sterile manufacturing facility and a highly skilled workforce. We expect to start delivering the first doses of the vaccine later this year.”

The government has also asked specialist healthcare warehousing owners to tender for distribution of a Covid-19 vaccine. Those contacted have been obliged to sign non-disclosure agreements but it is thought that that relates to getting supply channels opened up for the Pfizer vaccine in the existing national network of 50 or so hubs, which supply the NHS and pharmacies twice a day.

Martin Sawer, executive director of the Healthcare Distribution Association, said the association’s members were working closely with government “to understand how the existing robust and efficient pharmaceutical distribution network can be utilised to assist with the rapid rollout of the Pfizer-BioNTech vaccine once it receives regulatory approval”.

Pfizer will manufacture the drug at its plant in Puurs, Belgium, with a secure cold-supply chain enabling delivery to 1,500 vaccination centres in England.

The logistics entail specially designed hi-tech fridge boxes or “shippers” to hold 1,000 vials each at temperatures of -75°c ±15°c for up to 10 days.

Each of the shippers will be loaded with heat sensors that will transmit temperature readings to a Pfizer control centre to ensure the efficacy of the drug is not compromised while it is being transported.
After arriving in the UK the vials are to be distributed to vaccination clinics where they can be stored at temperatures of 2-8°C for up to five days.

Pfizer said it was confident the supply chain would not be disrupted by Brexit border checkpoints since the company had secured priority routes under contingency plans put in place for a UK “no deal” Brexit.

“We have a robust plan in place regarding supply of the investigational Pfizer and BioNTech Covid-19 vaccine candidate should it receive approval in the UK, in the event of a no-deal scenario. We are confident of our capability to deliver doses to the government’s designated facilities, according to product requirements.”

Last month the government signed ferry contracts worth £87m to secure freight capacity for medical supplies on nine routes serving the English ports of Felixstowe, Harwich, Hull, Newhaven, Poole, Portsmouth, Teesport, and Tilbury, which were described as being “in areas less likely to experience disruption”.