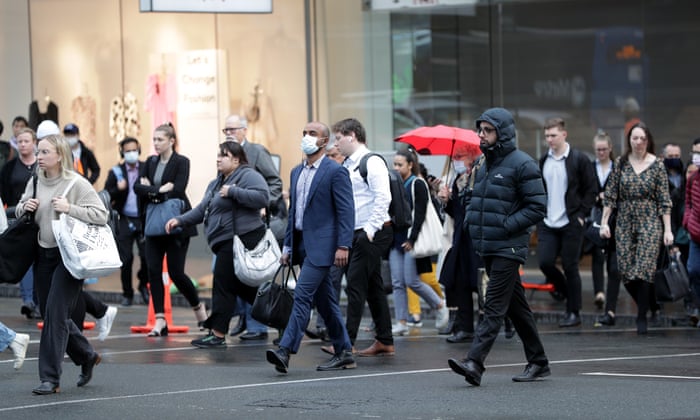 Health authorities in New Zealand are partially shutting down the central city of Auckland on Friday, asking workers in the city to stay home as they try to trace how a student became infected with Covid-19.

“Out of an abundance of caution, we are asking people who work in downtown Auckland to work from home tomorrow where possible,” Covid-19 minister Chris Hipkins said. The number of workers in Auckland central business district instructed to stay home on Friday is 100,000.

“If you must go into this area, please use masks and social distancing while health authorities continue work to trace the source of this infection.”

The mystery case, a female university student, is concerning as authorities say she has no links to areas of risk like the border.

The woman took the test late on Tuesday and was told by health authorities to stay home until she had her results. But on Wednesday she went to work wearing a mask , in a customer-facing role.

“We now know that this case called in sick to work after receiving the advice to isolate, but after a conversation with their manager went to work and wore a mask,” the ministry of health said.

The woman’s test came back positive on Thursday. She has been moved to a quarantine facility but there is still no concrete information on the source of infection, despite multiple interviews with her. Two of the woman’s friends have also been moved to quarantine, despite feeling well.

While infectious the student also took a number of Uber rides and visited four CBD restaurants and cafes for food and takeaways, as well as one of New Zealand’s major department stores, Smith & Caughey’s.

Residents at the apartment block where the woman lives have been asked to isolate and a mobile testing unit was on site, with all common areas closed. The block is next door to a managed quarantine isolation facility.

I know it's not great that we have another community case, but we have been here before & have come out the other end by following the rules. Please remember wear a mask, use the COVID app, follow good hygiene rules & socially distance. Be kind, be patient and stay safe!

The director-general of health, Dr Ashley Bloomfield, said urgent genome testing was under way and Aucklanders should remain vigilant with their protection efforts, including not going to work if they felt ill, and wearing masks on public transport and in public places.

The student had not visited university or attended lectures since mid-October.

“We are urgently working to trace this person’s movements over the past week to determine how they became infected,” Bloomfield said.

“Genome testing of this case is also underway to help us understand any potential links to previous cases.”

Hipkins asked Aucklanders not to panic, saying health authorities were taking a “calm and methodical response”.

Hey Auckland. @AshBloomfield has just announced a new case of #Covid_19 in Auckland not yet linked to the border. While we wait for more info, use your slices of #SwissCheese Use the app. Wear a mask. Wash your hands. Get tested & self isolate if you have symptoms. #covid19nz pic.twitter.com/2uazCq2g6w

In August Auckland entered a second three-week lockdown after a cluster of more than 100 infected people developed in the city’s south. Auckland is New Zealand’s largest city and home to 1.7 million people.

Lesley Gray, a senior lecturer in health at the University of Otago, said she had noticed New Zealanders becoming complacent towards protecting themselves and others from the virus. “From what information we have available about the Auckland community case it seems a little troubling that there is no obvious links to earlier cases,” Gray said.

“I was travelling [between Wellington and Christchurch] earlier this week and it was very interesting to note minimal use of the hand sanitisers placed in many public areas, little apparent scans or check-ins with the Covid tracer app at the airport, and I only saw one person mask-wearing.”

Fewer than 2,000 people have become infected with Covid-19 in New Zealand while 25 have died. The results of the government’s elimination strategy and hardline border policies have been praised around the world, and the freedom New Zealanders enjoy is envied. Sporting matches, concerts and eating and drinking out are all possible, and the prime minister, Jacinda Ardern, has resisted lobbying by Australia and some Pacific nations to open the borders.

Infectious disease experts have praised New Zealand’s response, though some have noted the borders remain a risky area and their management has not always been best-practice.