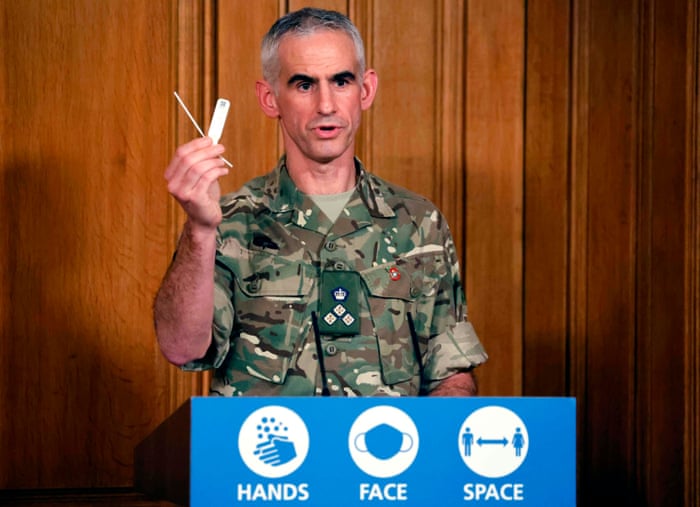 The lateral flow test bought by the UK government for mass testing in Liverpool, and potentially the whole country, could miss up to half of those who have Covid-19, according to experts.

The government has great expectations of the Innova test, having signed two contracts with the California-based company behind it. Innova told the Guardian it was now shipping more than one million tests a day to the UK.

The Guardian understands the government also hopes to use the test to reduce the length of self-isolation among people identified as the contacts of those with the coronavirus.

Results of an evaluation of the lateral flow tests, which pick up the antigen of the virus from a nose or throat swab or saliva within half an hour, were released by the government on Wednesday. It said they could be used to pick up infection in people with no symptoms.

“Extensive clinical evaluation from Public Health England and the University of Oxford show Lateral Flow Tests are accurate and sensitive enough to be used in the community, including for asymptomatic people,” the Department of Health and Social Care said in a statement.

It said the tests now being deployed in Liverpool had 99.6% accuracy. “Findings from PHE Porton Down and Oxford University shows newly deployed Lateral Flow Tests are highly reliable, sensitive and accurate in multiple settings,” it claimed. It had “an overall sensitivity of 76.8% for all PCR positive individuals but detects over 95% of individuals with high viral loads”. PCR is the gold-standard swab test that is widely used at present but requires lab processing.

Prof Sir John Bell of Oxford University, the government’s life sciences adviser, said that the test could be used to pick up infections in people who would not otherwise know they had one.

“The data in this validation report demonstrates that these inexpensive, easy to use tests can play a major role in our fight against Covid-19,” he said. “They identify those who are likely to spread the disease and when used systematically in mass testing could reduce transmissions by 90%. They will be detecting disease in large numbers of people who have never previously even received a test.”

But Professor Jon Deeks, an expert in assessing Covid-19 tests, disagreed with their assessment of accuracy and said it would be dangerous to use the tests to rule out disease.

“For the first time we are being allowed to see data on the performance of the test that the government have purchased for their mass screening Moonshot programme. The DHSC data show that up to half of the Covid cases may be missed by the test, and it may give more false positives than true positives when used in mass screening,” he said.

“I am really concerned that people are not given information to understand what the results mean. A negative test indicates your risk is reduced to between a quarter and one half of the average, but it does not rule out Covid. It would be tragic if people are misled into thinking that they are safe to visit their elderly relatives or take other risks.

“It is basic epidemiology that tests which miss cases like Innova are not fit for use to rule out disease – such as is needed to decide whether students are safe to travel home at the end of the year. The government’s plan is both wrong and dangerous.

“It appears that these data were not released before as they were not ready. Decisions to introduce mass testing don’t appear to have been based on any serious scrutiny of the evidence.”

Professor Sebastian Johnston from Imperial College London said the government announcement “gives the impression that all lateral flow antigen tests have high-sensitivity following extensive clinical testing by PHE/Oxford. This is very far from the truth.”

Of 40 tests which had been evaluated, only one – Innova – had been assessed in detail. “Yes it will be nice to have a single rapid test that can quickly detect people with high virus loads and get them isolated rapidly,” said Johnston. “This single test will not be good enough to say you are almost certainly negative, as its sensitivity is not good enough, especially in the hands of the general public.”

Peter Santeusanio, VP of product management at Innova Medical Group in California, told the Guardian that the ambition is for the tests to be used with saliva samples at home. People would use their smartphone camera to read the device and find out their result from an app.

“We, as far as I know today, are the only antigen test that is being used in the UK government to the best of my knowledge that is completely validated for saliva testing,” said.

He believes lateral flow tests can be used to help people get out of isolation if they are negative. Two tests, two days apart, would be enough to tell whether they are infected, he suggested. “Different people will have different protocols. But, in general, our position on this test is [if] you take the first test and the first test is negative, you would wait for two days, take the second test. And if you’re still negative, you know, you are probably OK, but if you want belt and suspenders, wait two more days.”