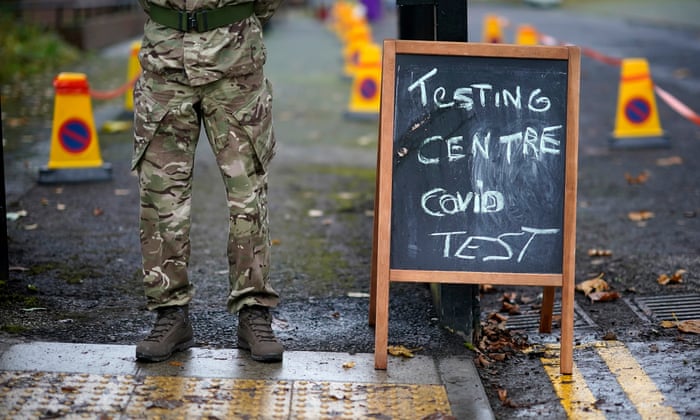 The rate of increase of new coronavirus infections in England appears to be slowing, data suggests, although the death toll is expected to remain high for weeks to come.

The latest estimate for the R number – the number of people each infected person goes on to infect – is between 1.0-1.2 for the UK and 1.1-1.2 for England, down from 1.1-1.3 for both the week before. If R is above 1, the epidemic will grow; below 1 it will eventually fizzle out.

According to the latest figures from the Scientific Advisory Group for Emergencies (Sage), the number of new cases are growing by between 1% and 3% a day in the UK, compared with 2%-4% a day the week before. In other words, while cases are still on the rise, it is spreading more slowly.

The estimates reflect the situation over the preceding couple of weeks, given time lags in the range of data used. That means the apparent slowdown is unlikely to be down to the latest national lockdown in England, but rather the impact of measures such as tier 3 restrictions – although it is hoped the new lockdown will reduce R in England further.

A mixed picture has emerged in other parts of the UK, with the latest R number for Northern Ireland estimated to likely be below 1, while figures for Wales put R between 1.0 and 1.3. For Scotland, the R number released on Thursday, was between 0.8 and 1.1.

According to Office for National Statistics data, the percentage of people in the community with Covid-19 in Northern Ireland now appears to have levelled off, but has increased in Wales.

“Positivity rates in Scotland have increased over the last six weeks but it is too early to say that they have levelled off,” the team add.

The findings join other datasets in suggesting the spread of the disease is now slowing across the country, with cases in the UK doubling between 28 and 63 days, although prevalence remains high.

New figures from the ONS reveal that around 1 in 85 people in the community in England – about 654,000 people – had coronavirus between 31 October to 6 November 2020, with about 47,700 new cases per day – although this does not include cases settings such as universities or care homes.

The previous week the survey suggested 618,700 people, or 1 in 90, had the virus, with a similar number of new cases per day.

However there are reasons for concern. The new ONS data reveals that the percentage of those testing positive is decreasing in older teens and young adults, and levelling off in other groups under 35 years – although prevalence remains high – but is increasing in older populations, including those most at risk from Covid.

“Positivity rates continue to increase in those aged 35 years and over and are now above 1% amongst those aged 35 to 49 and 50 to 69 years,” the team wrote.

In addition, experts have cautioned that it will be some weeks before any slowdown in the spread of the disease, or even a potential future shrinking of the epidemic, is seen in the death toll.

“Although there is some evidence that the rate of growth in some parts of the country may be slowing, levels of disease are very high in these areas; significant levels of healthcare demand and mortality will persist until R is reduced to and remains well below 1 for an extended period of time,” the Sage group have said.

The suggestion of an overall slowdown chimes with data from the Covid symptom study app, led by researchers at King’s College London and based on swab results of app users with symptoms, that on Thursday put R below 1 in all regions of the UK and on Friday indicated the number of daily new Covid cases was declining across the country.

However other data suggests the situation may be more complex: on Thursday new results from the React-1 study led by Imperial College London based on swabs collected from more than 160,000 people between 16 October and 2 November suggested there was an uptick in prevalence in mid-October compared with the month before, followed by a sharp fall and subsequent sharp rise before lockdown began.

The team said that meant they were not yet confident that infections had levelled off, noting cases might continue to grow.

Prof Steven Riley, a co-author of the study, added that the React-1 data suggests there are about 100,000 new infections every day in the community on England on average.

“[At the very end of this round of testing] we are observing the very highest prevalence that we have observed at any point nationally,” he said.