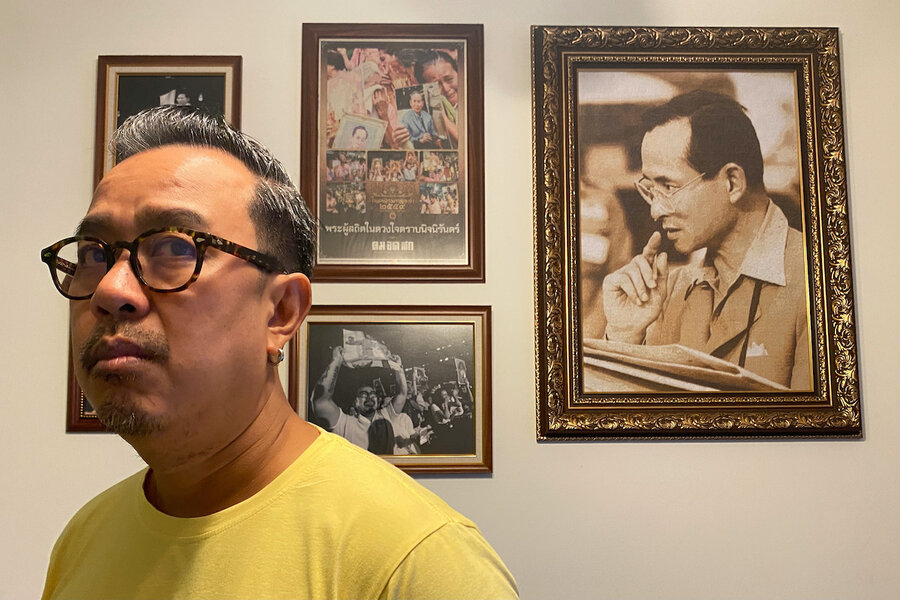 The words the Thai king spoke to Thitiwat Tanagaroon have been tattooed on his arm: “very brave, very good, thank you.”

The restaurant manager never imagined he would win praise from King Maha Vajiralongkorn when he brandished a royal portrait at an anti-government protest last month. Nor had he expected online attacks and calls for him to be fired from his job.

“There are a lot of people who still love the monarchy and worship the monarchy but they don’t come out,” he told Reuters.

“Whoever comes out gets harassed.”

Now, defending the monarchy can also draw criticism – a monumental shift in a kingdom where the institution has been promoted for decades and must be revered according to the constitution.

The palace did not respond to a request for comment on changing attitudes since protests began in July.

“The new generation and youth, they’re not into it,” protest leader Tattep Ruangprapaikitseree said of the deference generations of Thais have shown for the monarchy.

“They see that they’re human, the king is human, not a god.”

Like many Thais his age, Mr. Thitiwat grew up watching the nightly royal news on television. He saw people kneel as royal cars passed on streets lined with royal portraits. The monarchy was the one thing he always put faith in, he said.

A decade ago, he himself joined street protests – staged by royalist “yellow shirts” – to bring down an elected populist government.

He was among thousands who prayed and slept outside the hospital when King Bhumibol Adulyadej fell sick in 2016. And when King Bhumibol died after a seven-decade reign, Mr. Thitiwat – like the rest of Thailand – dressed in black for a year.

But Thailand has changed dramatically since protests that began in July against Prime Minister Prayuth Chan-ocha, a former army chief.

Anti-establishment demonstrations have evolved into demands to curb the powers of the monarchy, which critics accuse of abetting military domination, taking excessive authority, lavish spending, and allowing a crackdown on critics.

The protesters have emphasized that they seek to reform the monarchy, not abolish it, though royalists distrust them.

For Mr. Thitiwat, all accusations against the king are lies and the monarchy stands above politics.

His anger boiled over when chants on the street changed from vulgar expletives thrown at Mr. Prayuth to cursing the king, and he fumes at the now widespread criticism of royalty on social media.

“It makes me want to vomit,” said Mr. Thitiwat.

The protests have drawn tens of thousands of people, including to the Pinklao suburb where Mr. Thitiwat works: a humdrum tangle of choked roads, flyovers, and shopping malls.

“Half the people support the protesters and half are against,” said Gade, who supports the demonstrations and has a clothes stall 100 meters from Mr. Thitiwat’s restaurant.

On the day Mr. Thitiwat stood nearby with his picture of the late king, there was no confrontation, the royalist said. Protesters just raised their emblem of defiance, the three-finger “Hunger Games” salute.

But online, he said he was branded “disgusting” and much worse. The restaurant’s rating was knocked from 4.8 stars to 1 and it was bombarded with calls to fire him, its owner said.

“I was very scared,” said the owner, Bo, who did not want to give her full name or have her restaurant identified.

On Facebook, one user called Mind Pain wrote “I’m disappointed, time to find a new place to eat.” However, the owner said royalists were now coming in solidarity.

While royalists condemn such attacks, protesters complain of worse.

“Think about what the pro-democracy side endured in recent years. Prosecuted, followed, harassed, put into choke holds,” Mr. Tattep said. “There has to be dialog, not harassment.”

Gauging the shift in the country of 70 million is hard. The biggest protests have been bigger than royalist shows of support, but one recent poll said 60% of people thought the protesters should not attack the monarchy – though without explaining why.

Change is evident. Not everyone stands for the royal anthem in cinemas any more. When a woman slapped a teenager who didn’t stand for the national anthem at a railway station, it was she who faced public condemnation.

Mr. Thitiwat’s emergence as a hero for monarchists came when the king praised him outside the Grand Palace on the evening of Oct. 23 as he knelt with thousands of other well-wishers.

Mr. Thitiwat said the encounter was not staged, as critics have suggested. He burst into tears of emotion and later couldn’t sleep. The video he posted of the meeting went viral.

But many were not sympathetic. They accused the king of stoking division by praising Mr. Thitiwat while ignoring protest demands. A week later, the king said protesters were “loved all the same,” but there has been no royal response to their demands.

Some radical monarchists say they are ready for violence, but Mr. Thitiwat saw no place for that.

“The kids are like family,” he said. “I’ll try to be tougher and endure the hatred.”