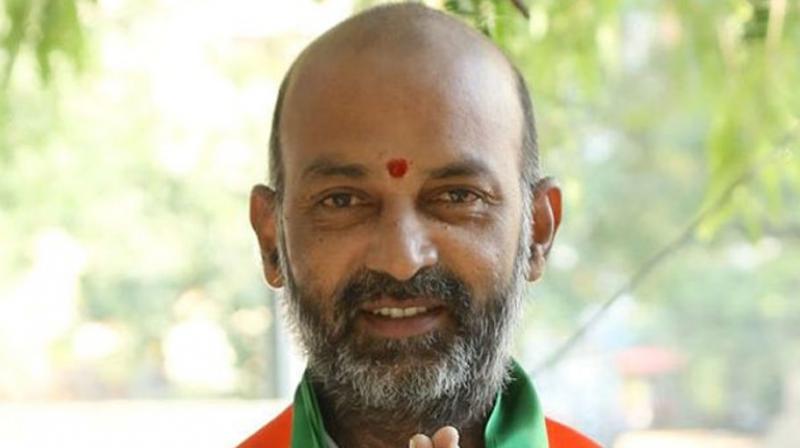 Hyderabad: The BJP has repeatedly said that it is an alternative to the TRS. Results like the one at Dubbak will be repeated in all the elections, said BJP state president Bandi Sanjay, who aggressively campaigned for the Dubbak byelection and earned a surprise victory for the party.

The icing on the cake for Sanjay, appointed TS unit president earlier this year, must have been Union home minister Amit Shah call to congratulate him. Speaking to Sanjay over the phone, Shah, the former BJP president, congratulated party leaders and cadre who worked for the victory of party candidate M. Raghunandhan Rao.

Since his surprise victory as MP from Karimnagar last year and especially after his elevation as TS BJP president, Sanjay has led a no-holds barred campaign against the TRS which has galvanised the cadre. His protests following the cash seizure at the party candidate’s house are seen as one of the turning points of this election.

Sanjay spoke exclusively with Deccan Chronicle just minutes after it became clear that the BJP had prevailed in the neck-and-neck battle.

How is the BJP taking Dubakka's victory? How was this success possible?

Sardar Vallabhbhai Patel won independence for Hyderabad by ending the Nizam’s rule. In the same manner, KCR is ruling Telangana now and the BJP will keep a check. Under the leadership of Prime Minister Narendra Modi, the country is moving ahead and people have confidence in the BJP. The BJP is the alternative in Telangana, which the people have proved by giving us a victory in Dubbak. Despite facing a lot of troubles, our hard work paid off well.

Top TRS leaders including Chief Minister K. Chandrashekar Rao, K.T. Rama Rao and T. Harish Rao said that the BJP was lying on the matter of Central funds. Why didn’t the people believe them?

They did not disclose the funds given by the Centre and diverted the money but they levelled allegations against the BJP. We proved that the Centre has funded the state government’s pensions, subsidised rice and other welfare schemes. When KCR made demeaning comments, the people understood that the funds were diverted. Knowing that the BJP will win, the TRS tried to mislead the people.

There were allegations that BJP candidate M. Raghunandan Rao had bribed voters, and the police even recovered money during searches. What do you have to say to this?

Was the money found in the candidate’s home? No! The TRS gave the money to the police who planted it there. If they have the guts, they should prove that the money belonged to Raghunandan Rao. The BJP does not need to distribute money. We won because we have the public support.

Can we assume that the BJP has become stronger by winning the byelection?

We are already stronger. We won four Lok Sabha seats and now we have won another Assembly seat. By winning the byelection, we have got the key from the public. You will see the BJP winning the GHMC elections. None can stop the BJP wave, including KCR. We dedicate this victory to Telangana martyrs. The sacrifice of thousands of martyrs in securing Telangana statehood were put at stake by the eighth Nizam KCR. By winning the elections, the BJP will keep a check on corrupt persons and put them behind bars.

Did your arrest at Siddipet and your subsequent deeksha help you in winning public sympathy?

It is my responsibility to fight if my party candidate is harassed by the ruling party by using the police. When I wanted to visit Siddipet, I was arrested despite being a state party president. I will not fear anyone. I will fight back with the party and cadre's support. I protested against the illegal arrest. Instead saying that I gained sympathy, it can be viewed as the people understanding the harassment of the ruling party.

How much money would you think the TRS has spent in Dubbak?

It is a habit for the TRS to bribe voters. The Dubbak people realised this and gave a thumping victory to the BJP. Harish Rao tried to save his minister’s post. They spent Rs 5,000 for each vote and had a target of spending Rs100 crore. However much the TRS is willing to spend, the people are not ready to trust them.