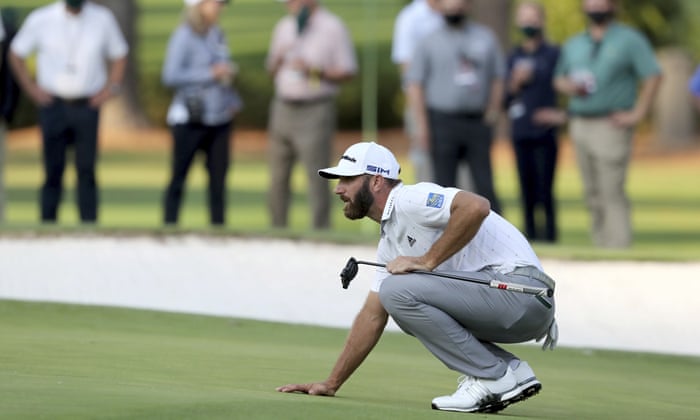 Dustin Johnson continues to give the impression he feels Augusta National owes him one. By the close of the third round at this, the 84th Masters, the world No 1 had approached territory whereby the impact of failing to convert victory might be more interesting than such a scenario transpiring. Johnson – unflappable and, on this form, unbeatable – leads by four at 16 under par after a third round of 65. Johnson has the 72-hole Masters scoring record of 270, or 18 under, firmly in view.

In 2017, Johnson arrived in Georgia as the world’s top ranked player. He duly toppled down a flight of stairs in his rental home, costing him Masters participation. Nineteen months ago, Johnson was a footnote at tied second as Tiger Woods shook the sporting world to its foundations. Johnson’s worst finish in half a dozen tournaments leading into this event was sixth. What has happened next does nothing to contradict the notion of the Masters being the most predictable of the majors. Johnson is within 18 holes of adding a Green Jacket to his US Open trophy from 2016. Being a double major winner would, in truth, be a fairer representation of the 36-year-old’s talent.

“I’ve got a lot of confidence in what I’m doing,” said Johnson. “But I still have to put one more very good round together.”

Sharp insight regarding Johnson’s approach had arrived a day earlier from Rory McIlroy. The pair are regular practice companions in Florida and were again in each other’s company during rounds one and two here. “See ball, hit ball, see putt, hole putt, go to the next,” said McIlroy. “He makes the game so simple, or makes it look so simple at times. I think he’s got one of the best attitudes towards the game of golf in the history of the game. The way he approaches the game is awesome.” High praise.

Abraham Ancer, on his Masters debut, is among those closest to Johnson. The Mexican has Im Sung‑jae and Cameron Smith for company at 12 under. Dylan Frittelli is at minus 11, one clear of Justin Thomas.

It seemed incredible to recall that at midday on Saturday, there was a nine-way tie for the lead. Johnson promptly demonstrated that he had little time for congestion, with an eagle at the 2nd, which carried him to 11 under. As he birdied the 3rd, 4th and 7th, the remainder of the field were left grasping for air. That Johnson did not make a single mistake thereafter, as others slipped, pointed towards a potential procession. Those who preside over the Masters do not take kindly to their pride and joy being dismantled, meaning course setup for day four will be intriguing.

Jon Rahm had been among those locked at the summit. Later, at the 8th, he produced the kind of wobble that would have had amateurs the world over nodding knowingly. Rahm topped a fairway wood with his second shot and cracked a tree with his third. Rahm closed at nine under, having made a bogey at the last. Steam, meet ears.

Barring an extraordinary Sunday – which do happen – McIlroy will ultimately rue a first round of 75 that left him needing Masters snookers with 54 holes to play. He has played that stretch in 11 under par, meaning he will start the final day at minus eight. As McIlroy holed out from the bunker that guards the 12th green, a run at Johnson was a viable plan. The Northern Irishman’s charge was to come to a shuddering halt with a three-putt bogey at the 13th but a 67 leaves him with the faintest of chances. Sometimes that’s all a player of McIlroy’s calibre needs.

“I haven’t made a good run here on a Sunday so it’s about time,” McIlroy said. “I think I’ve left myself too far back after the bad first day but I’ll go and give it a good effort tomorrow and see where that leaves me.” Brooks Koepka has matched McIlroy’s aggregate after backing up a 70 with successive 69s.

That Woods had to complete his second round early on Saturday morning before partaking in a rapid turnaround always looked potentially troublesome. Matters of a physical nature are not nearly as stark as they used to be for the defending champion but elongated days such as this do not play at all into his hands. Woods made seven pars in a row before a bogey at the 8th, with the remainder of the round somewhat flat for the 15-times major champion. A 72 left him five under. Unsurprisingly, Woods walked gingerly from the final green.

“These are long days,” the five-times winner said. “We’ve been at it for quite some time. It’s just part of the deal, if you have long days like this I’m going to get a little bit sore, which I definitely am.”

Bryson DeChambeau had survived the cut by just a stroke, with the US Open champion subsequently explaining he has been suffering from dizzy spells since Thursday evening. Given the stinging criticism that has come DeChambeau’s way since he publicly reset Augusta National’s par to 67, one can only hope he wasn’t looking for sympathy.