Hamilton won his first title on the final corner of the final race of the season in Brazil. Seven points ahead of the Brazilian driver Felipe Massa, he needed to finish fifth or better if Massa won his home grand prix. Massa duly won the race for Ferrari while Hamilton was overtaken by Sebastian Vettel on lap 69 at São Paulo, which pushed him into sixth. But on the final corner, aided by rain he swept past a struggling Timo Glock to secure the required fifth-place finish and pip Massa by a single point for the championship. At the time, he was the youngest driver to win it, making up for the desperate disappointment of losing the 2007 title in the last race.

How Hamilton saw it: “It’s pretty impossible to put into words. I thought – do I have it? Do I have it? And when they told me I was ecstatic.” 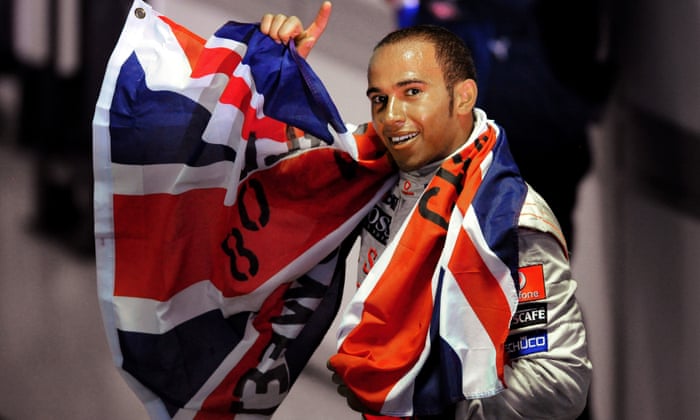 After a fallow spell with McLaren and an unmemorable first year with the Silver Arrows, Hamilton emerged into a dominant car at the start of the hybrid era. The championship was characterised by his tit-for-tat battle with his teammate, Nico Rosberg. After a contentious coming together with Rosberg in Belgium, Hamilton went on to dominate the second half of the season, pressuring Rosberg into an error in Monza that gave him the momentum to win five races on the bounce. He took the title under the double-points rules in the final race in Abu Dhabi.

How Hamilton saw it: “This is the great day of my life: 2008 was a special time, but the feeling I have now is way, way past that, above and beyond. It’s the greatest feeling I’ve ever had. This is like an outside-the-body experience.”

The Ferrari was quicker for most of the season and Vettel seemed in control of the championship heading to Germany. The German driver was on pole, Hamilton 14th, but Hamilton won the race, chasing Vettel down in the rain, with his rival crashing out. From there on, Vettel seemed haunted, another error in Italy aiding Hamilton and in Singapore, at a race it was believed would favour Ferrari, Hamilton produced one of the greatest qualifying drives to sit on pole, saying: “That lap felt like magic.” He won the race, and then the title in Mexico to equal Juan Manuel Fangio’s five world championships. 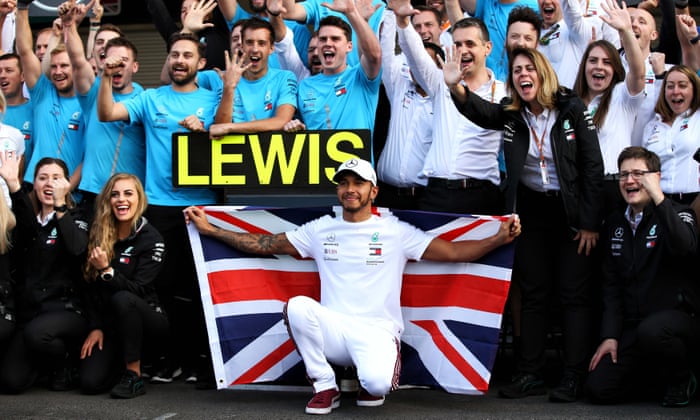 How Hamilton saw it: “It’s definitely the best year I feel. It was the goal when I won the championship last year. I asked how can I improve? How can I be a better all-round driver, not just in the car but with my team in the garage, with the engineers and in the factory? I feel this year I have been able to lift them all up.”

Having lost the title to his teammate Rosberg in 2016, who immediately retired, Hamilton returned more motivated and focused than ever with a new teammate in Valtteri Bottas. Ferrari were very strong and it was his first title battle with Vettel. In Baku, the eighth race of the season, the rivalry boiled over, Vettel going into Hamilton when the race was under the safety car, costing him dearly. Although the Ferrari driver held the championship lead into the second half of the season, from Belgium on, Hamilton cruised with Vettel crashing in Singapore and suffering reliability issues elsewhere. In Mexico, Hamilton was champion again, despite finishing ninth having collided with Vettel on the opening lap.

How Hamilton saw it: “It was a horrible way to do it, to be honest … A big thank you to my family and my team. Mercedes have been incredible over the last five years and I am so proud to be a part of it. I never gave up. It was not the [type of] race I wanted. I kept going right to the end. I just want to lift it up to my family, and God and my team.”

This season was about the first half rather than the second for Hamilton; the foundations of his title coming from six wins in seven races having lost the opener in Australia to Bottas. The European leg included an inspired decision from his team to win on old rubber in Monaco. He conceded niggly penalties and Mercedes suffered what their team principal, Toto Wolff, described as “a bad day” that “could not have got much worse” in Germany, but by the United States GP in early November, he had secured title number six. It was his third consecutive title, recorded with a second-placed finish in Austin after Bottas overtook him late in the race. 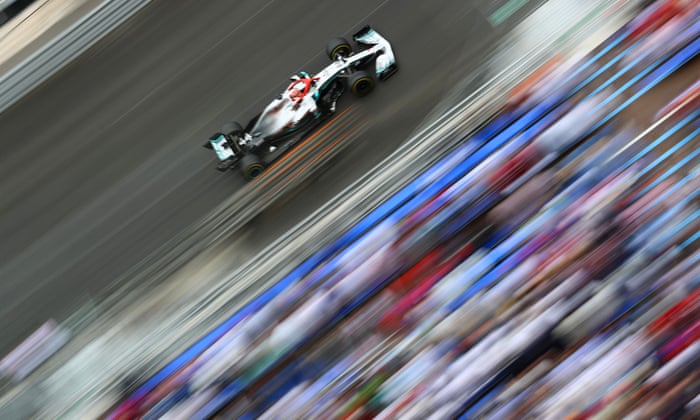 Hamilton v Rosberg the sequel was marked by tension and squabbles, markedly in China and Monaco as the team won all but three of the season’s 19 races. At Silverstone, Hamilton’s decision-making in the wet was peerless and kickstarted a run in which he won six out of eight races. He sealed his third world championship in a wheel-to-wheel battle with Rosberg at the US GP, pressuring his rival into an error in the final 10 laps and winning the championship with three races remaining.

How Hamilton saw it: “I remember my first British championship when my dad and I drove home singing We Are the Champions. It’s hard to believe I’m sat here as a three-time champion.”

In a season unlike no other as a result of the Covid-19 pandemic, Hamilton was calm and unthreatened, his focus on leading F1’s battle against racism. He was nonetheless ruthless in closing out the title, beating his teammate Bottas from second in Imola to tighten his grip on the championship. In Turkey Hamilton displayed patience as well as speed, gradually working his way up after starting sixth and eventually taking the lead on the 37th lap. To underline his superiority he lapped Bottas, who finished 14th and out of the points, giving Hamilton an unassailable 110-point lead. His 10th race win of the campaign sealed the title and equalled Michael Schumacher’s record of seven drivers’ world championships. 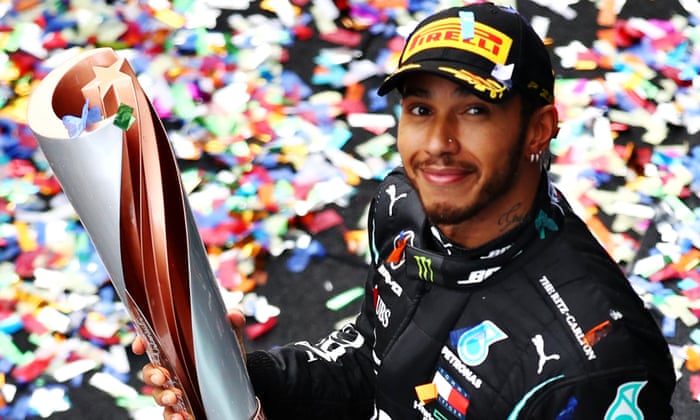 How Hamilton saw it: “We dreamed of this when I was young, when we were watching the grands prix … and this is way, way beyond our dreams. It’s so important for kids out there to hopefully see this – don’t listen to anybody that tells you you can’t achieve something. Speak it into existence, you’ve got to work for it, you’ve got to chase it. Never give up and never doubt yourself.”