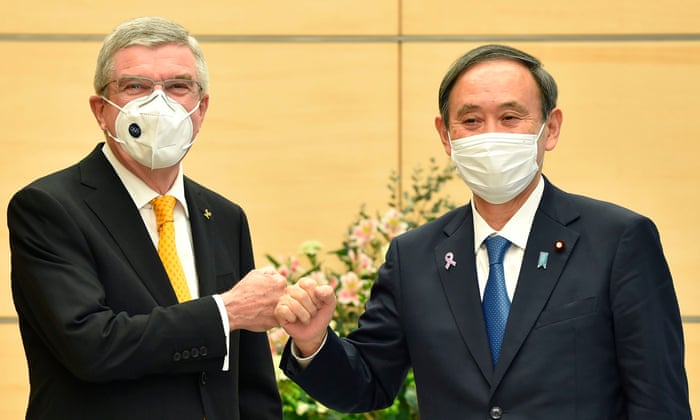 Thomas Bach, the president of the International Olympic Committee (IOC), has said he is “very, very confident” that spectators will be able to attend next year’s Tokyo Olympics, describing the postponed Games as the “light at the end of the tunnel”.

Bach, who is visiting Japan for the first time since he and the then Japanese prime minister, Shinzo Abe, agreed in March to delay Tokyo 2020 by a year due to the coronavirus pandemic, told reporters that he and Abe’s successor, Yoshihide Suga, were “totally aligned” in their determination to make the event a success.

Bach, who bumped fists with Suga when they met on Monday, was due to give an Olympic award to Abe, who was prime minister when Tokyo won the bid in 2013, followed by meeting with Tokyo’s governor, Yuriko Koike, and the organising committee president, Yoshiro Mori.

On Tuesday, Bach will visit the athletes’ village near Tokyo Bay and the $1.4bn main stadium.

Bach said he and Suga, who both wore masks, “were totally aligned in full determination and confidence to make the Olympic Games … and the Paralympic Games a great success next summer here in Tokyo”.

He added: “This makes us also very, very confident that we can have spectators. Together we can make these Olympics Games and the Olympic flame the light at the end of the tunnel.”

Japanese organisers are still grappling with the logistical challenge of ensuring the safety of more than 11,000 athletes, as well as tens of thousands of officials, journalists and other Games-related staff, and whether to allow spectators to watch events.

A decision on access for overseas sports fans will be made in the northern hemisphere’s spring, with possible options including testing before and after arriving in Japan, and limiting visitors to those from countries that have brought the outbreak under control.

Pfizer’s announcement last week that it has developed an effective vaccine have boosted the prospects for a more conventional Olympics, but there is no guarantee that significant numbers of people will have been vaccinated by the time the Tokyo Games open on 23 July 2021.

Bach said only that the IOC would step up efforts to make sure athletes are vaccinated “if a vaccine is available by then”.

Suga said he was determined that the Games would serve as “proof that humanity has defeated the virus”, despite the pandemic’s continued sweep across Europe, the US and other countries.

While Japan has seen relatively fewer cases and deaths, experts have warned that the country may have entered a third wave, with daily infections at their highest since the start of the outbreak.

“I explained that we are making various considerations on the premise of having spectators and agreed with president Bach to work closely together towards realising a safe and secure Olympics,” Suga said, according to the Kyodo news agency.