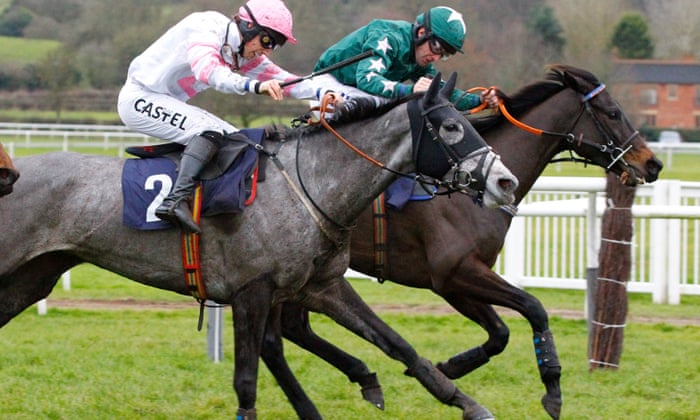 Racing’s seemingly fathomless ability to generate contentious sideshows was once more on show at Fontwell on Sunday, where the final race descended into farce, all the runners but one being disqualified for going around a hurdle they should have jumped.

After a prolonged stewards’ inquiry, the race was awarded to Dharma Rain, who was tailed off in seventh place as she crossed the line but had been the only one to jump all the hurdles, thanks to the quick thinking of her young jockey, Jack Tudor.

Problems began when Bluebell Sally was pulled up, apparently injured, shortly after a hurdle on the first circuit. As the field approached that spot a circuit later, ground staff scrambled across the track with fluorescent yellow arrows to ensure the runners raced around her but seven of the eight jockeys still in the race interpreted that as an instruction to miss the hurdle entirely.

“It was made very, very unclear, I thought,” Tudor told Sky Sports Racing. “It wasn’t done brilliantly at all. I just went with my gut instinct. There was nothing in the hurdle, so I jumped it.”

Tudor therefore followed one of the golden rules that jump jockeys try to remember, that an obstacle should not be bypassed unless directional markers are planted in it. But Paige Fuller, one of the jockeys who steered around the hurdle, said: “The markers looked like they were in the hurdle. Until you’d gone around, you couldn’t see that they were behind the hurdle.”

Oh dear… here's where it went wrong in the @FontwellPark 3.50pm, Dharma Rain placed first after this confusion, explains @skysportsAlexH and @SirBobCooper pic.twitter.com/tMBRYZCVAJ

The stewards seem to have found some sympathy for that view, opting not to ban any of the seven jockeys whose mounts were disqualified. For that reason, the fallout from this incident is likely to be a good deal less bitter than for the London Gold Cup last December where seven banned jockeys were cleared after it was decided a yellow flag was not waved in a “sufficiently showy manner”.

But that makes three self-harming incidents in the space of four days for the sport, following the failure of a winning jockey to weigh in at Taunton last Thursday and a very poor quality photo-finish at Cheltenham on Saturday that resulted in a dead heat being declared when many onlookers believed one of the runners had clearly prevailed. Poor organisation and lack of forethought are common themes in racing’s howlers but that old favourite, lack of funds, is the chief suspect in the latter case.

The sport’s ruling body said it had been “in discussions with Racetech and racecourses prior to the Covid-19 pandemic, looking to improve the photo finish options. We will hope to pick up these discussions in due course.” Racecourse photographers said the necessary technology to produce clearer prints has existed for a long time.

Meanwhile, the two big races here at Cheltenham fell to Irish raiders, on a day when only six horses made the journey over. The big clue ahead of the Greatwood Hurdle was that Robbie Power had boiled himself down to 10 stone for the ride on The Shunter, having insisted for years that he would not ride below 10st 3lb.

“I haven’t eaten a whole pile,” Power conceded in the winner’s enclosure. “I had breakfast Friday morning, then a few bits of chicken, some All Bran for breakfast in the mornings, that’s all. Haven’t had dinner the last two nights.

“Not eating doesn’t bother me, it’s something I’ve grown up with. I’ve probably smoked more the last few days than I do normally.”

Put The Kettle On, a shock winner of the Arkle here in March, showed her guts and determination in slogging past Duc Des Genievres in the closing stages of the Shloer. She is now third in the betting for next year’s Champion Chase, behind only Altior and Chacun Pour Soi.

“She’s got a massive heart because she hated the ground, was never happy the whole way,” reported a mud-splattered Aidan Coleman upon dismounting. “It’s a testament to her ability and her attitude.”