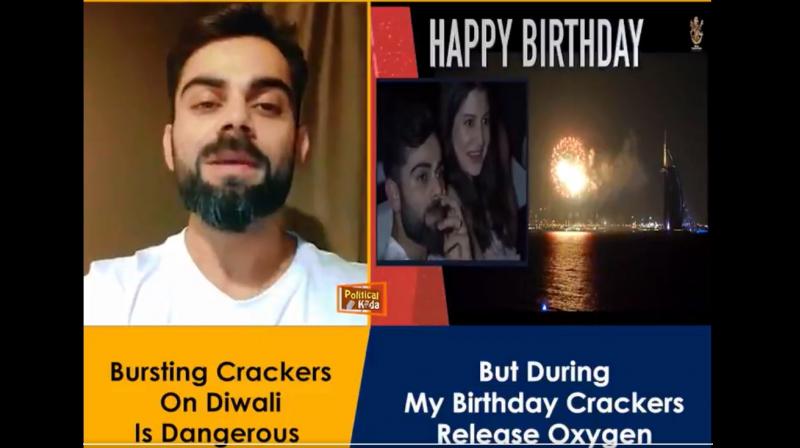 Virat Kohli’s video message asking his fans not to burst crackers during Diwali has drawn widespread flak from netizens.

The Team India skipper had taken to Instagram and Twitter to ask fans to stay away from fireworks in order to protect the environment, setting off a flurry of responses from irate social media users calling him out for hypocrisy.  The situation was made worse by another video which surfaced on social media showing Kohli celebrating his birthday with his Royal Challengers Bangalore (RCB) team during the recently concluded IPL tournament in the UAE, against the backdrop of fireworks.

“Tired of this dumb hypocrisy of so-called icons. @imvkholi focus on playing cricket, don’t give us gyan on how to celebrate our festivals(sic).”

“They PREACH about POLLUTION caused by #CRACKERS on #Diwali But they are the one who Enjoy FireWorks in NewYear or in Cri Matches & Celebrations(sic)!!”

“You literally have a showroom in your house with vehicles not giving more than 10 kmpl. Now sit and calculate the qty of CO2 generated in kg basis. (If you know to ) .You will realise how stupid you sound(sic).”

"Every cricketer opening and finle ends with tons of firecrackers Why the #ell you don't preach the same to sponsorers. Why environment is spoiled in 2 days of Diwali celebrations. This is not Netflix series it’s our Diwali (sic)."

The IPL franchise Royal Challengers Bangalore has clarified that the celebratory video which surfaced online labeled as Kohli’s birthday are in fact the visuals of UAE’s Flag Day Celebrations that take place on every November 3rd. It’s not Virat Kohli’s birthday celebration!

The official account of RCB posted on Twitter: “Hope you are all enjoying a happy and peaceful Diwali with family and friends. To clarify, the visuals of the fireworks shown in RCB’s recent celebratory video are the archival footage of UAE’s Flag Day celebrations. RCB continues to work hard to protect the environment like we've over the years(sic).”