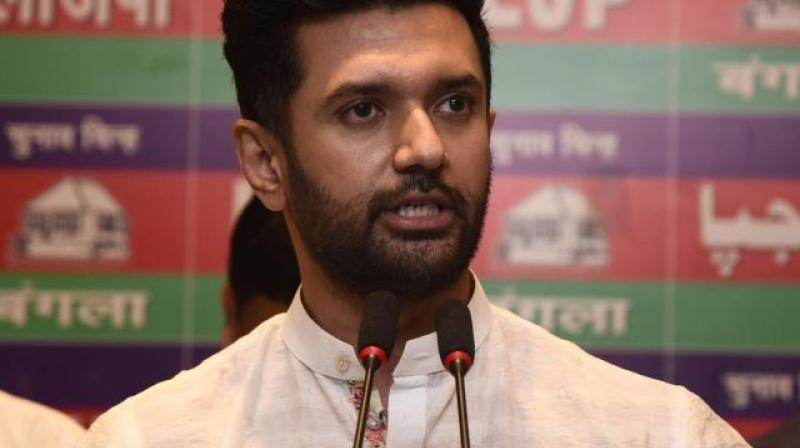 Patna: Lok Janshakti Party chief Chirag Paswan on Wednesday said that his party had broken away from the NDA and fought the elections in Bihar to strengthen the BJP and damage the JD(U).

Assessment shows that it was Mr Paswan’s aggressive campaign against Nitish Kumar which harmed the JD(U) which was in direct contest with the LJP on most of the seats. This reduced its tally and the party slipped to number three position after the BJP and RJD in the state.

“I think my party has been strengthened and it would be easier for us to perform well in future elections. Our party’s goal was to strengthen the BJP which we have achieved,” Mr Paswan said during a press conference at his party’s office in Patna.

He credited Prime Minister Narendra Modi for NDA’s victory and said that people have expressed their faith in him for the development of Bihar.

Mr Paswan, who had left the NDA ahead of Assembly elections citing ideological differences with chief minister Nitish Kumar, said that “the grand victory for NDA shows that people have faith in Prime Minister Narendra Modi and it is important that the BJP gets stronger for the development of the state”.

Mr Paswan says that the Bihar election has also changed the perception of the LJP — that it can only contest in alliance with other parties. He also said that his party will continue to support Mr Modi at the Centre, but can never support Nitish Kumar and Sushil Kumar Modi in Bihar.

“Around 25 lakh voters trusted ‘Bihar First, Bihari First' and we are happy that despite contesting alone our party's vote share increased by 6 per cent. Earlier people used to call us a ‘Pichlaggu party’ but this election has changed that image,” Mr Paswan said.