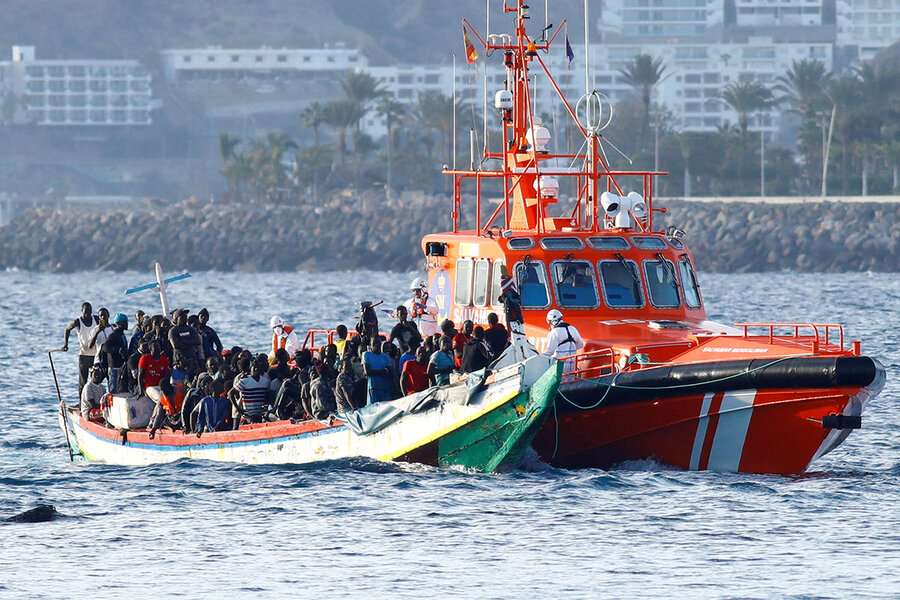 It’s the low season, but the Tenerife Ving hotel would still normally be packed with German and Scandinavian tourists escaping gray autumn skies.

Instead, the heads poking out from the hotel’s goldfinch yellow balconies are young men from Senegal and Gambia, who have recently arrived in this tourist town on the island of Tenerife after treacherous journeys on wooden fishing boats called cayucos. They’re in quarantine to protect the community from COVID-19.

“They won’t let us out,” a young Senegalese man calls out in French over his balcony. He’s been inside for more than a week and will stay for at least one more before being placed elsewhere or left to his own devices. “I’m not really sure what’s going on or what’s going to happen next.”

The more than 100 men staying at the Tenerife Ving are just some of hundreds of migrants being housed across the Canary Islands in hotels left vacant by the COVID-19 pandemic. Since January, more than 17,000 people have arrived in the Canary Islands, mainly from Senegal, Mauritania, and Morocco, in the largest wave of migration the archipelago has seen since 2006, when over 30,000 people sought refuge here. Nearly 10,000 people have arrived in the last month alone.

The pandemic has forced the regional government to look for ways of accommodating the surge of people, in hopes of protecting migrants as well as the local population from COVID-19. With just 20% of hotels in the Canary Islands currently open, at just 6% occupancy, the government has turned to the badly hit tourism sector to step in and help with the crisis.

And with locals already facing hunger and an unemployment rate of 25%, the newly arrived migrants’ treatment has stirred some resentment – in addition to stereotypical fears of terrorism and worries about COVID-19 contagion. The government is banking on a boom in volunteerism – largely due to the high unemployment rate – to combat mistrust and bridge understanding between communities.

“The current context has amplified xenophobic and racist attitudes, and the propagation of hate speech,” says Vicente Manuel Zapata, a professor of human geography at the Universidad de La Laguna in Tenerife. “But we can’t say this is a general phenomenon. The Canarian population still has a relatively positive attitude about immigration. … It has always been a part of our national fabric.”

“Everything is being improvised”

At the locked door of the Tenerife Ving – one of the few hotels housing migrants that hasn’t boarded up its windows – security guards stand watch. Passersby who try to talk to the men peeking out of their windows are quickly shooed away.

It’s all in line with the current government directive, which is to keep the number and names of participating establishments private. It’s not out of secrecy, say volunteers, but as a way to protect the migrants.

“These men have crossed an ocean. They’re in a new place with a new language and everything is different,” says Rosa María, a Red Cross volunteer. “They’re still in shock.”

Ms. María has been volunteering at two hotels in Puerto de la Cruz after being put on furlough from her job at a boat tour company during Tenerife’s first COVID-19 wave. She now spends eight hours a day, five days a week serving food, leading improvised exercise classes, and chatting with the young men. She says volunteering has shown her how fortunate she is.

Aid workers aren’t the only ones creating relationships with migrants; it’s also extending to hotel staff. In the south of the island, near Los Cristianos – at the heart of the 2006 crisis – the Granada Park hotel was housing around 300 migrants at the start of November with more arrivals expected in the coming weeks.

The hotel has finally reopened, having being shuttered since March 21 due to the pandemic, and hotel owners say the situation is a win-win. Granada Park is able to pay employees their full salary – alleviating pressure on the government – while providing humanitarian aid. Red Cross volunteers provide food and translators, with hotel staff maintaining their regular jobs of cleaning rooms and serving meals – to a new clientele.

“We haven’t had any of our staff members complain about the situation and we’re very proud of that,” says Javier Cabrera Amador, a consultant for Granada Park. “On the contrary, they’re creating friendships with these young men since they’re seeing each other on such a regular basis.”

But operations still vary enormously across the islands. Some staff members are on-site, while other hotels have left the entire operation to aid organizations like the Red Cross. Certain hotels are hosting migrants for two-week quarantine periods, where no one is allowed to come or go. Others are acting as makeshift social housing centers, giving migrants a nightly curfew but allowing them to stay for a handful of months as they apply for asylum or refugee status, or set their sights on France, Germany, or the Spanish mainland.

“No one can give you any precise information on how long these migrants will stay in the hotels,” says José María Santana Suárez, who leads advocacy and social participation efforts at the Spanish Commission for Refugee Aid in Gran Canaria, “because everything is being improvised.”

Disquiet in the Canaries

For some locals, putting up migrants in luxury hotels is too much to bear when they’re stuck lining up at food banks to put dinner on the table or applying for unemployment benefits. While the government has stamped out rumors that migrants living in the country illegally receive a daily living stipend, it has brought out an intolerant thread on an island chain known in recent years for its integration efforts.

At the end of October, more than 1,000 people protested in the port city of Arguineguín in Gran Canaria – where around 1,700 migrants are currently stranded, waiting for PCR tests and left in unhygienic conditions – against what the demonstrators see as a migrant “invasion.” In Puerto de la Cruz, migrants are gradually finishing their quarantine period and moving about town. Curiosity, as well as xenophobia, is mounting.

“I’m not racist, but we’re a small island so we need more laws to monitor who is coming in,” says Martin Barreto, the owner of Puerto Bakery and Coffee. “There will be more COVID-19 cases and more terrorists coming in, just like in France, if things aren’t controlled.”

Aid workers, however, are holding out hope that volunteerism will help counter some of the fear that the current migration wave is bringing. Groups like Médicos del Mundo Canarias and the Red Cross note a steady stream of volunteers in recent months, but say they still need more hands.

“Volunteering fulfills me enormously,” says Ms. María. “I don’t care what [these men’s] religion is or the color of their skin. They’re human beings and they deserve the same respect as everyone else.”