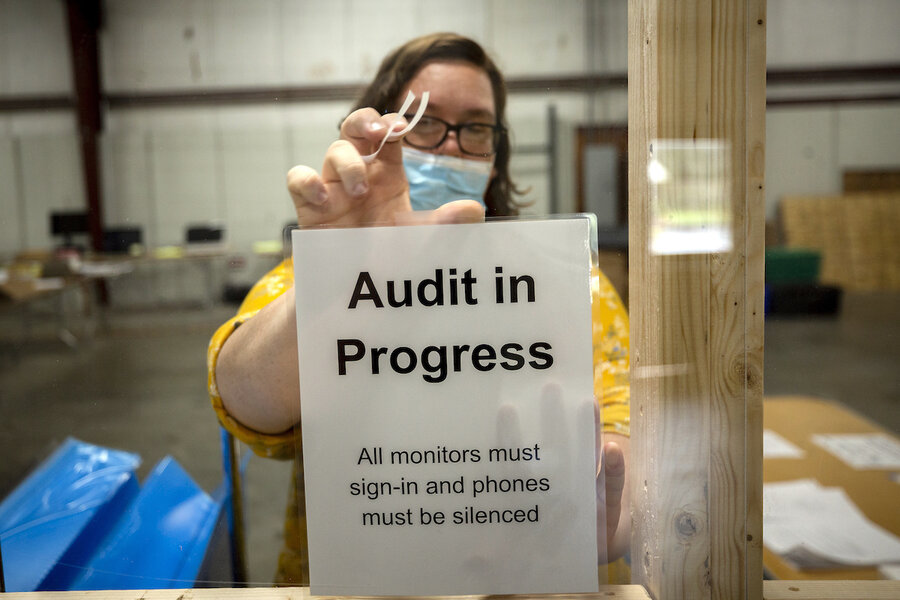 Georgia says it’s going to be tallying – by hand – nearly 5 million ballots that were cast in its very close presidential election on Nov. 3. But is it a recount? An “audit”? And why are they doing it?

It’s all a bit confusing, but election experts say what’s happening in Georgia is unlikely to change the outcome and are warning that discrepancies in the final vote count are likely. That doesn’t mean anything nefarious happened. Experts say some discrepancies are expected when so many votes are counted a second time using an entirely different method – hand versus machine.

While President Donald Trump has been making unsubstantiated claims of fraud as he challenges the election’s outcome, Georgia’s secretary of state, Brad Raffensperger, has defended the work of election officials in the state and said the review was unlikely to change the outcome. Unofficial results show Democrat Joe Biden leading Mr. Trump by about 14,000 votes.

Is this an official recount?

No. State election officials have said this is not a recount, rather a post-election audit.

The main difference between the two: A recount is typically tied to determining a winner when there’s a close margin in an election, whereas post-election audits are routine and used by states to ensure that equipment and procedures counting the vote all worked properly.

In Georgia, for instance, a recount is conducted using the same scanners that read and tallied the unofficial results already released. The audit is being done by hand.

So what is Georgia doing, then?

The post-election audit is being held under a new state law that requires one to be conducted for the first time this year on a race of the secretary of state’s choosing. Mr. Raffensperger said he selected the presidential contest given the “national significance of this race and the closeness of this race.”

The specific type of audit that Georgia has chosen is known as “risk-limiting.” It involves checking paper ballots against machine tallies to ensure the accuracy of those machines. This year was the first time Georgia used a fleet of ballot-marking voting machines that produce a paper record of every ballot cast in person.

Risk-limiting audits typically start with an initial sample of ballots. That sample increases depending on the level of discrepancies that are found. This kind of audit ends when either election officials reach a certain level of confidence that the outcome is correct or a full count has been performed. It is not meant to produce results that are an exact match to a previous tally.

But Georgia election officials say they will be reviewing every ballot to start. They say it will be easier for county officials to manage because the large number of ballots and the close margin are likely to result in a tally of every ballot anyway.

Was the audit prompted by allegations of fraud?

No. Mr. Raffensperger has said repeatedly that his office has seen no evidence of widespread fraud with the Nov. 3 election. A top official said Thursday that the point of the audit was “to show the equipment scanned the ballots properly and the counts we got were the right counts.”

Before the decision to conduct the audit was announced, Trump allies in the state sent Mr. Raffensperger, a fellow Republican, a letter requesting that he order a hand recount before certifying the results. State election officials have said the decision to do the audit was being discussed prior to the letter.

In addition, Mr. Raffensperger has faced calls to resign by Georgia’s two United States senators, both Trump supporters facing close runoff elections that could determine which party controls the U.S. Senate next year.

What is the timeline of the audit?

Counties must begin the process no later than 9 a.m. Friday, a week before the state’s deadline to certify the election.

The state is asking for counties to complete the hand tally by Wednesday at 11:59 p.m. It’s a tight turnaround time. Representatives from each party will be allowed to watch the process, although they will not be permitted to challenge any ballots.

State election officials said they would not be releasing interim tallies and would announce results after the hand tally was complete.

Yes. Both election experts and the Georgia secretary of state’s office have said the final vote tallies will almost certainly be different than the unofficial results reported previously. “The outcome will change slightly at the end, more than likely,” says Gabriel Sterling, with the secretary’s office.

Hand counts are generally less reliable than machine counts, according to Larry Norden, an elections expert with the Brennan Center for Justice. “Humans make mistakes,” Mr. Norden says, adding that the margin between Mr. Biden and Mr. Trump meant it was unlikely that the overall outcome would change. “It’s extremely unlikely you are going to find enough discrepancies to overcome 14,000 votes, and at the end of the day that is what matters.”

State election officials have said the results of the hand tally will be used to ultimately certify the election.