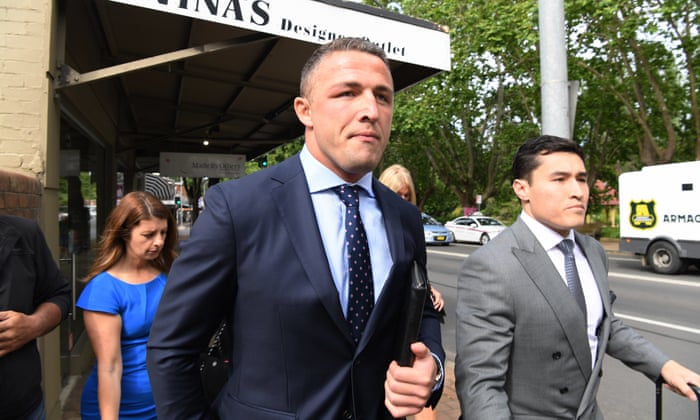 Sam Burgess’s former wife leaked her police statement to a national newspaper to combat the “toxic” cover-up culture within the NRL, a court has heard.

Phoebe Burgess appeared before Moss Vale local court on Monday after it was alleged her ex-husband threatened her father, Mitch Hooke, in his NSW Southern Highlands home in October 2019.

Burgess’s lawyer, Phillip Boulten SC, has accused the footballer’s former wife of trying to destroy his reputation following the publication of an explosive front-page article in the Australian.

But Phoebe Burgess said journalists approached her about rumours and she handed over a document prepared for her lawyer “instead of covering it up which is so typical of the system I was part of, that I believe is toxic within the NRL”.

Former South Sydney captain Burgess, 31, has pleaded not guilty to stalking or intimidating with the intention to cause fear or physical harm. An apprehended violence order has been taken out on behalf of Hooke by the police.

Hooke denies the allegation and said the ex-NRL star exploded in a rage when he asked him to leave the property.

The former Minerals Council chief executive said Burgess was yelling in his face from about 20cm away, repeatedly telling him: “I’m going to get you”. “I remember the finger and it being right in my face,” Hooke told the court. “And the look, I’ve not seen it before. He was wild. He was yelling. Not quite screaming but yelling, loud and aggressive in my face, it was enraged hate. I was terrified, I’ve never felt fear like it. My whole body went cold.”

Burgess continued to hurl expletive-riddled abuse at the 64-year-old man as he got into his car before taking pictures photographs and speeding away, Hooke alleged.

His daughter also gave evidence about how distressing the event had been for her father.

“He was emotional and shaky, he wasn’t making a lot of sense, saying he’s OK: ‘He’s gone, he had wild eyes … he just came at me’,” she told the court. “Never seen my father quite like that before … he was wobbly on his feet.”

Her distressed phone call to triple zero was played to the court on Monday. Ms Burgess tells the operator everyone is fine “but I just need to report it cause he’s still in the area and he’s really angry”. She later added: “He’s done this to me too, he’s done this to me.”

Burgess’ defence has accused Phoebe and her father of seeking legal advice before calling the police shortly after the incident occurred – with phone records showing both did contact lawyers. Before Ms Burgess left the witness box on Monday she became teary stating it was against her instinct to call the police.

“I thought it was the ultimate betrayal, I didn’t want to call the police.”

CCTV footage was played in court showing Burgess interacting and taking pictures with fans while drinking four beers at the Royal Hotel at Bowral before he was due to visit the Southern Highlands home.

Burgess retired in 2019 after a 270-game NRL and English Super League career. He stood down from roles as a commentator and South Sydney assistant coach in October. The hearing is expected to continue early next year.