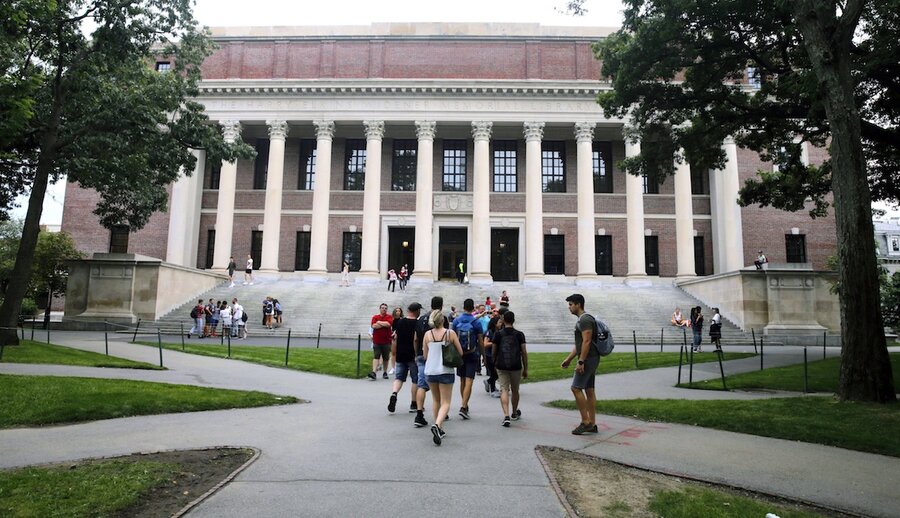 Harvard does not discriminate against Asian American applicants, a federal appeals court ruled Thursday in a decision that offers relief to other colleges that consider race in admissions, but also sets the stage for a potential review by an increasingly conservative United States Supreme Court.

The decision came from two judges on the 1st U.S. Circuit Court of Appeals in Boston who rejected claims from an anti-affirmative action group that accused the Ivy League University of imposing a “racial penalty” on Asian Americans. The judges upheld a previous ruling clearing Harvard of discrimination when choosing students.

It delivers a blow to the suit’s plaintiff, Students for Fair Admissions, a nonprofit that aims to eliminate the use of race in college admissions. In a statement, the group’s president, Edward Blum, said he was disappointed but that “our hope is not lost.”

“This lawsuit is now on track to go up to the U.S. Supreme Court where we will ask the justices to end these unfair and unconstitutional race-based admissions policies at Harvard and all colleges and universities,” Mr. Blum said.

Both sides have been preparing for a possible review by the Supreme Court, and some legal scholars say the issue is ripe to be revisited.

Filed in 2014, the lawsuit has revived a national debate about race’s role in college admissions. In multiple decisions spanning decades, the U.S. Supreme Court has ruled that colleges can consider race as a limited factor in order to promote campus diversity. But the practice faces mounting challenges in the courts, including three suits from Students from Fair Admissions.

Many elite colleges consider applicants’ race and give an edge to some underrepresented students to promote diversity on campus. The Trump administration has opposed the practice and backed the lawsuit against Harvard. In October, the Justice Department filed a similar suit accusing Yale University of discriminating against Asian American and white applicants.

In Thursday’s decision, however, the judges ruled that Harvard’s admissions process passes legal muster and aligns with requirements that the Supreme Court laid out in previous cases.

“The issue before us is whether Harvard’s limited use of race in its admissions process in order to achieve diversity in the period in question is consistent with the requirements of Supreme Court precedent. There was no error,” the judges wrote.

Mr. Blum, a legal strategist, has spent years working to rid racial considerations from college admissions. Before the Harvard case, he orchestrated an unsuccessful fight challenging the use of race at the University of Texas. In that case, a white student said she was rejected by the university because she was white.

The suit alleges that Harvard’s admissions officers use a subjective “personal rating” to discriminate against Asian Americans who apply to the school.

Using six years of admissions data, the group found that Asian American applicants were given the highest scores in an academic category but received the lowest scores on the personal rating.

The group’s analysis found that Harvard accepted Asian Americans at lower rates than any other racial group, while giving preference to Black and Hispanic students with lower grades. The lawsuit also alleged that Harvard works to keep a consistent racial breakdown among new students, which the organization says amounts to illegal “racial balancing.”

Harvard denies any discrimination and says it considers applicants’ race only in the narrow way approved by the U.S. Supreme Court.

In close calls between students, some underrepresented students may get a “tip” in their favor, school officials have said, but students’ race is never counted against them.

After a three-week trial that cast new light on Harvard’s secretive selection process, a federal judge ruled that other factors could explain why Asian Americans are admitted at lower rates than other students. In her 2019 ruling, District Judge Allison D. Burroughs said Harvard’s admissions process is “not perfect” but concluded that there was “no evidence of any racial animus whatsoever.”

A three-judge panel of the appeals court heard arguments in September, but one of the judges, Juan Torruella, died in October before the case was decided. The ruling notes that Judge Torruella heard oral arguments but did not participate in issuing the decision.

The judges agreed with a district court finding that Harvard’s personal rating is not influenced by race. Although the rating may be correlated with race, the judges wrote, the link is more likely to be caused by outside factors including students’ personal essays or letters of recommendation.

Ultimately, the judges wrote, Asian American identity has a statistically insignificant effect on admissions probability, and they concluded that Harvard does not place outsize emphasis on race.

“Harvard has demonstrated that it values all types of diversity, not just racial diversity,” the judges wrote. “Harvard’s use of race in admissions is contextual and it does not consider race exclusively.”

The decision received praise from the American Council on Education, an association of university presidents, which called it a “clear win” for Harvard and other universities.

Some legal scholars, however, believe that the current makeup of the Supreme Court may be more likely to place tighter limits around the use of race in admissions or to forbid the practice entirely.

The three Supreme Court justices appointed to the court by President Donald Trump have pushed the nation’s highest court more conservative than when it last ruled in favor of the consideration of race in college admissions in 2016.