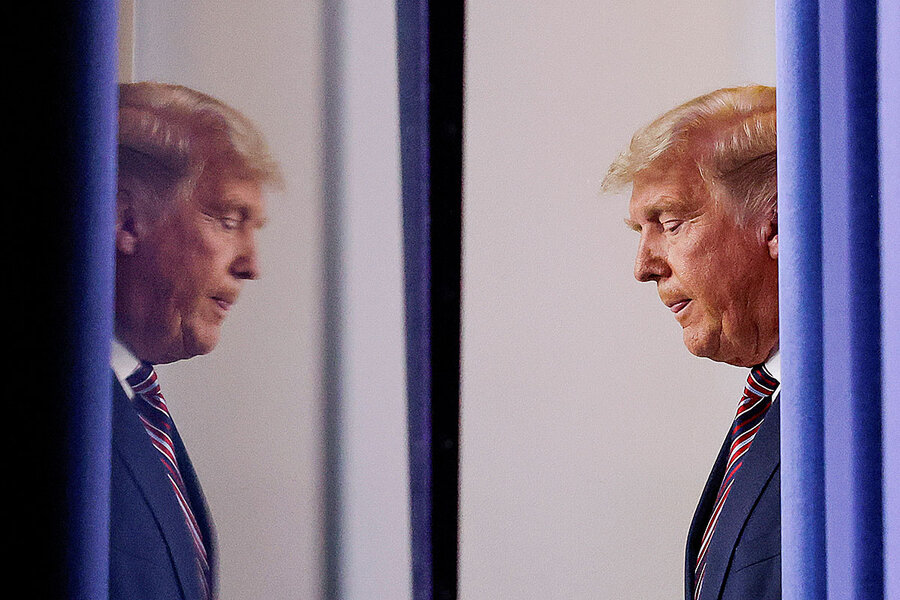 A few mornings ago, when Mary Ring’s granddaughter asked her, “Are you sad that Biden won?” the Kenosha County resident was quick to respond.

She and her husband, Pat, are ardent supporters of President Donald Trump, and 10 days after the election, their front lawn in Bristol, Wisconsin, is still festooned with the president’s signs. But like a number of families across a country sharply divided by politics, their adult children, including their granddaughter’s parents, voted for President-elect Joe Biden.

Their political differences with their children aren’t simply a matter of contrasting values, she and her husband say. They are also about the fundamental facts they believe to be true – like the claims of widespread voter fraud the president continues to allege.

“They think we have misinformation,” says Ms. Ring, who, like her husband, have been loyal watchers of Fox News for years. “We say they’re misinformed,” she says, noting that their grown-up kids watch MSNBC and listen to podcasts.

“That’s what we get for sending them to college!” Mr. Ring jokes. But Ms. Ring has the last word. “They’re wonderful human beings,” she says. “We just don’t agree.”

But the Rings’ loyalty to the president sent a sudden jolt through the trust they’ve put into their favored news source. On election night, Fox News was the first to project Mr. Biden the winner of Arizona, just before President Trump was reportedly preparing to declare victory.

“I’ll never listen to the mainstream media again,” says Mr. Ring, sitting at his dining room table with his wife and granddaughter. “And I’ll never listen to Fox again,” he says, though he adds he’ll still watch Tucker Carlson, one of President Trump’s most steadfast defenders. “He’s one of us.”

Such implicit trust and loyalty, as well as the jubilant sense of identity the president often inspires, has been one of the most enduring features of the polarizing presidency of Donald Trump from the start. At least 70% of Republicans said they trusted the president more than news outlets such as The New York Times, The Washington Post, and CNN. But 54% of Republicans also said they’d trust President Trump over Fox News as well, according to a 2017 YouGov poll.

Though he lost the popular vote to Mr. Biden by more than 5 million votes, over 72.5 million Americans voted for President Trump in this year’s election – nearly 10 million more than the number of those who vaulted him to victory in 2016. And according to a Politico/Morning Consult survey of registered voters on Nov. 6-9, some 70% of Republicans, in varying degrees, do not believe the 2020 election was free and fair.

That’s in contrast with the Trump administration itself, with its Cybersecurity and Infrastructure Security Agency releasing a statement Thursday calling the Nov. 3 election “the most secure in American history.” “There is no evidence that any voting system deleted or lost votes, changed votes or was in any way compromised,” it continued, adding that while there were “many unfounded claims and opportunities for misinformation,” voters should turn to election officials for answers.

For over a decade, many political observers have expressed growing concern not only with the country’s alarmingly stark political divisions, but also the phenomenon of “media silos” and “echo chambers” that have only seemed to reinforce them, isolating Americans from each other, creating two virtual worlds of competing fact claims and casual dismissals of the other side’s “fake news.”

“What we’re seeing is a widespread lack of trust in the news media and established institutions, which is leading to a rejection of factual information and, beyond that, standards of evidence,” says Katlyn Carter, professor of history at the University of Notre Dame in Indiana.

“It’s a very dangerous situation because there is no quick remedy to rebuild trust when it has eroded to such an extent that not only facts, but the very processes of establishing them, are contested,” says Professor Carter.

The Trump campaign filed a number of lawsuits in the swing states he’s projected to lose, including the so-called blue wall states of Wisconsin, Michigan, and Pennsylvania. As of Friday, the Trump campaign was 1-14 in court, with most judges ruling that the cases lack factual evidence to support claims. In fact, the Trump campaign lawyers have acknowledged in court in two states that they are not alleging voter fraud – let alone widespread voter fraud, as the president claims.

In Arizona on Friday, Trump lawyers asked a judge not to issue a ruling, since the Biden win there rendered a decision unnecessary. Also on Friday, a Michigan judge refused to throw out the certification process for Wayne County, saying, “it would be an unprecedented exercise of judicial activism.”

Sitting behind a plexiglass barrier at a rest area on Interstate 94 near Kenosha, where he cheerfully helps guide travelers to their destinations, Mr. Marshall says he’s not surprised President Trump is projected to lose the election. But he’s frustrated with the nation’s cacophony of news sources, and he laments the loss of the trust he once placed in the authoritative news broadcasts of an earlier era.

“Now things have become so politically polarized in the country,” and that has made it very difficult to sort through the dizzying amount of competing factual claims, says Mr. Marshall, a self-described “news junkie” who watches NBC News and sometimes tunes in to CBS and Fox. “It bothers me that there’s no place I can watch the news and find someone who has no agenda.”

Jason Sponaugle, a junior at the University of Cincinnati and president of its chapter of College Republicans, says he has no trust at all in mainstream news media outlets, and he considers both CNN and Fox News to be  “entertainment-based” networks dominated by a narrow set of corporate interests and governed by political agendas – a view held by many young progressives as well.

And like many in his generation all across the political spectrum, Mr. Sponaugle, who’s studying politics and finance, has embraced the wide diversity of news sources easily available online, and he says he tries to go straight to the source as often as possible, seeking the statements and websites candidates themselves publish online, and piecing together his understanding of the news through a variety of outlets.

“To be completely honest, I hope I’m wrong [about any potential voter fraud] because the implications of this are massive, but it’s looking more and more like a fix was in in some of these different states,” Mr. Sponaugle says, giving weight to the statements of the Trump campaign.

Yet in many ways, Mr. Sponaugle and other Republican voters say they simply want to allow the president’s claims of voter fraud to be examined in the nation’s courts. “As of right now, nothing’s finalized,” says Mr. Sponaugle. “I think it remains to be seen whether or not President Trump lost this election, and that’s something we’ll find out as the legal process plays on.”

Indeed, there is a silver lining to the number of lawsuits the Trump campaign has filed in state and federal courts, given the profound lack of trust many voters express toward the nation’s mainstream news outlets.

“Elections as an institution need to be viewed as legitimate, which in our case means free, fair, frequent, and transparent,” says Gayle Alberda, professor of politics at Fairfield University in Connecticut. “But we also need the ability for any candidate, whether you’re the winner or the loser, to have an avenue to protest the results.”

“That’s an essential part of a democracy in that it upholds the legitimacy of an election,” Professor Alberda continues. “If the results are finalized, but then I don’t have as a candidate the ability to question those results or seek legal action or ask for a recount, then how do we know that election was valid?”

Given the nation’s generally widespread respect for the court system, these lawsuits can in effect strengthen the country.

“They’re looking at the claims in these court cases, they’re looking at whether or not there was proof, they’re hearing the president’s case if there was widespread fraud,” Professor Alberda says. “And then we can settle those conflicts. … Will they change the outcome of the election? Probably not, but it does and hopefully it will give the election the validity that it needs after they have exhausted all those options, and all the other country’s institutions have done their job.”

But there remains the wider problem, many scholars say, of the country’s massive media ecosystem unmoored from a common set of facts, and the tremendous amount of faith tens of millions of Americans place in President Trump over traditional and nontraditional news sources.

“Leaders influence the worldview their followers are in, and those worldviews define their private reality,” says Helio Fred Garcia, who teaches professional development and leadership at Columbia University in New York. “Create a worldview in which the media is ‘fake news’ and that science is a deep-state conspiracy, and the evidence suddenly is irrelevant.”

“Leaders who lie persistently create a false worldview for their followers, who cling to those worldviews even when the leader moves on,” continues Mr. Garcia. “So, even after the Bob Woodward recordings revealed that Donald Trump knew that the virus was deadly, airborne, and worse than the flu, his followers kept showing up for rallies unmasked and undistanced,” even as many said they believed the coronavirus was a hoax. “When he said he was cured and that the nation was turning the corner, they continued to believe him and not the objective evidence.”

Many observers, too, say the distrust millions of conservative Americans express toward the news media is only exacerbating the problems surrounding factual information.

Older Republican voters like Ms. and Mr. Ring in Wisconsin – who are even skeptical of sources like Fox News – are turning to alternative and more deeply partisan sources such as the One America News Network, Newsmax, Gateway Pundit, and other sources many say are uncritically friendly to President Trump.

And as Twitter and Facebook have incorporated more aggressive fact-checking policies and warning labels on many of President Trump’s posted claims, Mr. Sponaugle believes these in fact have demonstrated extreme bias against conservative views.

So like the Rings, he recently set up an account on Parler, a social media site that does not block or censor any user information – which has made it a source of wild conspiracy theories and anti-Semitic views, critics say.

Nathan Ireland, a construction foreman and Trump voter who lives in Springfield Township in Ohio, is also considering switching to Parler to get his news, believing the reporting on Fox News during the election “raised some red flags” as it cast doubt on the president’s claims.

“People stick to what they know, who they think they can trust,” says Mr. Ireland. “It’s all about who you trust, which, right now it’s hard to figure out who that is.”