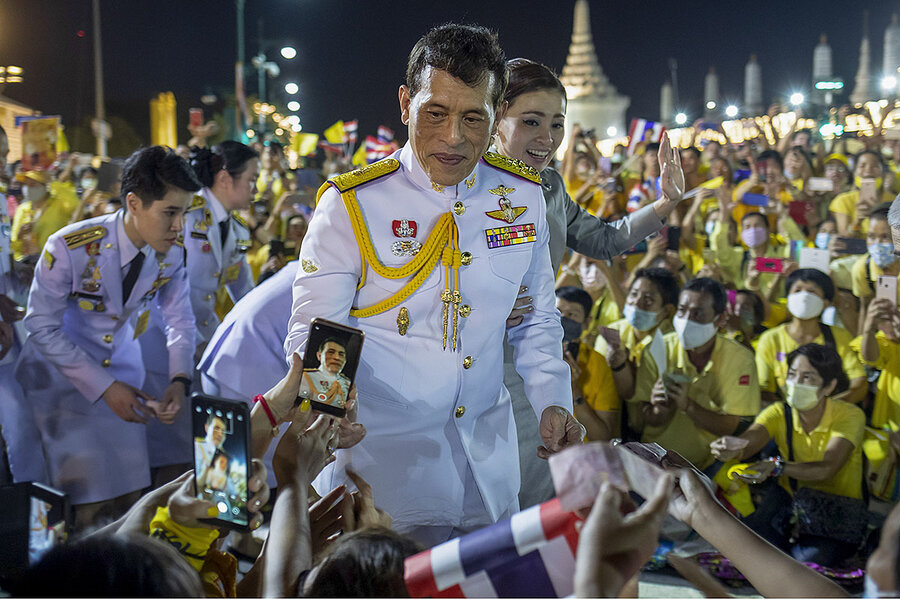 As cries of “long live the king” echoed outside the palace walls, Sirinrat Khittichet and her mother waited in line to catch a glimpse of Thailand’s royal family. They were among thousands of yellow-clad royalists gathered on a sticky November evening in support of King Maha Vajiralongkorn during a rare walkabout in the Thai capital.

“My family and I have always been loving and loyal to the [royal] family,” says Ms. Sirinrat.

But she knows that not everyone shares that loyalty in a country roiled by months of youthful political protests, which is why she came out. “We want to let His Majesty and people who use vulgar words to attack him know that there are people who still love and have faith in him.”

Faith in the monarchy has been the bedrock of modern Thai identity, backed by a panopticon of propaganda and criminal punishment for criticism. The palace remains a symbol of power, spirituality, and prestige. But King Vajiralongkorn, who replaced his long-serving father in 2016, is facing unprecedented opposition from restless young Thais who have rallied across the country to demand political change, including curbs on royal power and wealth.

While protesters insist their goal is reform, not abolition, of the monarchy, some have grown bolder and more insulting in their rhetoric; social media posts have also ridiculed the previous widely revered ruler, King Bhumibol. These taboo-breaking insults, and a recent show of disrespect toward a royal motorcade, have provoked counterdemonstrations by royalists and even calls for the military to seize power so as to protect the monarchy.

On Tuesday, police used water cannons laced with chemicals to disperse anti-government protesters who rallied outside the Thai parliament. There were also smaller clashes nearby between some protesters and supporters of the monarchy.

Behind this political struggle is a generational divide, as younger Thais shed the deference of their parents toward the monarchy and other traditional institutions. “They’re more willing to question and challenge the hierarchies that dictate who you are and what you do in Thailand,” says Tamara Loos, a professor of history and Southeast Asian studies at Cornell University.

And what makes their dissent so potent is the reputation of King Vajiralongkorn as an impulsive thrice-divorced ruler who enjoys a lavish lifestyle abroad. That reputation jars with the upright ethics of his late father, whose decades of diligence and decorum endeared him to young and old, including pro-democracy activists who praised his intervention in a 1992 political crisis.

“There’s a real moral dilemma for many Thais … who have been raised with the monarchy but are also pro-democracy and have a moral code,” says Professor Loos. “They revered and respected Bhumibol. He was regarded as a moral and ethical human being – and that’s not true of King Vajiralongkorn.”

Since 1932, when absolute monarchy ended in this Buddhist kingdom, the powers of the crown have waxed and waned. King Bhumibol, who was born in Cambridge, Massachusetts, ascended to the throne in 1946 when political power was held by the Thai military. During the Cold War, U.S. advisers sought to rebuild the Thai crown as a unifying symbol against Communism, and the king began to visit rural towns and villages, carrying a map and a camera. Photos of his visits, and stories of his efforts to develop underserved regions, are still iconic.

Historians debate his role in Thailand’s fitful democratization as the Vietnam War wound down; defenders say King Bhumibol tried to reconcile factions and promote good governance, while critics accuse him of legitimizing coups, including the 2006 overthrow of a popular elected leader.

Still, few doubted his humble lifestyle and hardworking habits, and his death in 2016 plunged the nation into mourning. His heir, King Vajiralongkorn, a military-trained pilot, replaced him.

King Vajiralongkorn has spent most of his reign living in southern Germany. He insisted on amending the Thai Constitution so he could legally rule from there and took personal control of a royal trust that holds an estimated $40 billion in property and assets. Last year he married for the fourth time and named another woman as his royal consort, a title not used in modern times.

“We measure him against the backdrop of his father, and it’s so hard for him to succeed,” says Thongchai Winichakul, a Thai historian and former leftist student leader.

He argues that even a morally impeccable sovereign would struggle to define himself, given the expansion of the monarchy under King Bhumibol and the cult of personality that emerged.

“The monarchy is a peculiar institution anywhere in the world. It’s an institution of one person,” says Professor Winichakul, a professor emeritus at the University of Wisconsin in Madison.

Last month, thousands of anti-government protesters marched to the German Embassy in Bangkok, calling for an investigation into the king’s conduct in Germany, including his tax records. German authorities have said Thai politics shouldn’t be conducted on their territory.

Like other Thai royals, King Vajiralongkorn almost never grants interviews and his affairs are shrouded in secrecy, though his louche image has made him a curiosity to German tabloids, which have published candid photos that Thai anti-royalists have seized upon to mock him.

During his recent walkabout here, a CNN correspondent was allowed to ask him on camera about his reaction to the protesters. “We love them all the same,” he replied.

That’s a view that Ms. Sirinrat shares. “I think everybody has a right to protest, and everybody thinks differently. We need to listen to everybody,” she says.

She also defends the king’s overseas sojourns at taxpayers’ expense. “I think that it’s his personal affairs. Commoners like us sometimes travel abroad. We should focus on his royal duties for Thais,” she says.

Also in the crowd that night was Suwit Thongprasert, an outspoken former monk who led an ultra-royalist faction of a protest movement in 2014 that ended in a coup. After he handed a floral garland to the queen, King Vajiralongkorn then struck up a conversation with him. Mr. Suwit said later the king had thanked him for organizing local events promoting the legacy of the royal family.

Like other royalists, Mr. Suwit won’t discuss King Vajiralongkorn’s lifestyle. He describes the crown as “one of Thailand’s three main pillars: the nation, the religion, and the monarchy. If a pillar was for a house, and it was nibbled by termites and collapsed, the house [Thailand] would not be able to stand.”

Mr. Suwit says he plans to hold more events in villages to celebrate the monarchy, funded by donations from fellow royalists. He praises the king for spending more time in Thailand since his return last month from Germany.

“When people are calling that they want to be closer to His Majesty, His Majesty then shows his honesty by becoming closer to the people, closing the gaps between himself and the people, and gradually unifying together. He is reforming himself,” he says.

So far, calls for reform of Thailand’s military-backed government and the monarchy have fallen on deaf ears. Some fear that a political stalemate could, as in the past, end in a coup.

Army chief Narongpan Jitkaewthae has ruled out a coup, saying politicians must solve the crisis; his predecessors issued similar denials before seizing power, including the current prime minister, Prayuth Chan-ocha, who led the 2014 coup. An ultra-royalist group recently submitted a petition to the government to “shut down” the country in order to end the protests.

“People that are calling for a coup are a minority,” says Chaiyan Chaiyaporn, a political scientist at Chulalongkorn University in Bangkok. If there is one, “it will not end very easily. The coup will complicate and damage the monarchy’s situation even more,” he warns.

After the royal walkabout, with the family driven off in a motorcade, Ms. Sirinrat’s face is bathed in sweat. Her smile is undimmed as she praises the man who she says is still learning his role as king.

“When you have a new friend, you need to give them time and chance so that you can adjust to each other. This is the same. I am giving him the time. If he doesn’t abandon us, we will not abandon him,” she says.

Japan rolls out vaccination drive. Too late for the Olympics?