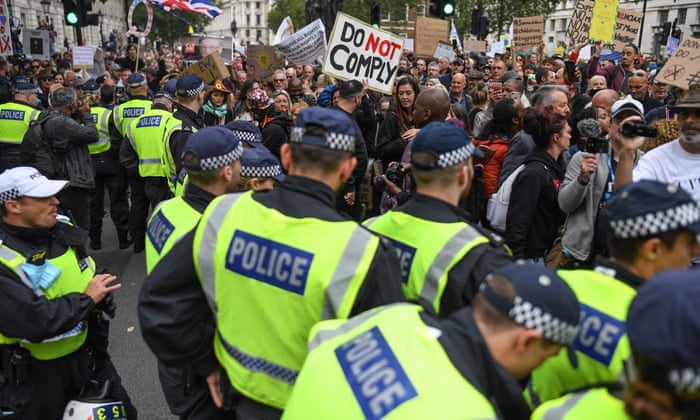 Police forces can resume handing out £10,000 fines for breaches of coronavirus regulations, the National Police Chiefs’ Council (NPCC) has said following discussions with the government.

It comes after an emergency order was made to stop officers handing out the fines to Covid rule-breakers, amid concerns the government’s flagship deterrent is unfair.

Officials are scrambling to stop the crackdown on large gatherings in England and Wales, which was announced by the prime minister this summer, from imploding after serious problems emerged.

Scores of £10,000 on-the-spot fines have been issued for those organising anti-lockdown protests, student parties, raves and large weddings. The fines are part of measures to enforce rushed-through Covid legislation banning gatherings of more than 30 people.

But many of those who challenged the penalties in court had the penalties reduced to hundreds of pounds instead after judges decided the level of fine should be determined by an individual’s ability to pay, according to a source with knowledge of police discussions.

On Tuesday evening police issued a new statement saying the issue had been resolved after forces had the option of issuing a £10,000 fines again, but would have to explain that people could fight it in court. The NPCC said: “People found to be in breach of the regulations relating to gatherings of over 30 people will be made fully aware of their options when faced with a £10,000 FPN (fixed penalty notice), to ensure fairness.”

On Friday, forces were told of the “urgent” problem in a letter from the NPCC and told to stop issuing the FPNson those blamed for organising gatherings of more than 30 people.

The letter, seen by the Guardian, said: “With immediate effect we are asking all forces to cease issuing FPNs with a £10,000 fine of enforcement.” It said forces could instead issue court summonses or make arrests.

The letter from the NPCC to all chief constables and heads of criminal justice in England and Wales reveals behind-the-scenes concerns about flaws in the rushed measures.

A joint ethics committee of police, prosecutors and court officials had met and decided to order the halt, it said. “This arises from the issue of a significant inequitable position for those who elect to pay the fine, versus those who do not and progress to the courts and are subject to means-testing on conviction.”

The instruction says all £10,000 fines currently in process should be reviewed and officials would see whether the system of FPNs could be reformed and reinstated.

In a sign that the rules may be deemed unfair, the letter adds: “We wish to ensure that all persons subject to enforcement action under this particular regulation are treated equally and fairly …”

Among those fined £10,000 were Piers Corbyn, the brother of the former Labour leader Jeremy Corbyn, who led an anti-lockdown protest in August. The organisers of a 1,000-strong rave in east London and a wedding for 80 people in Essex last month were also fined.

An NPCC spokesperson said: “On Friday 13 November we advised all forces to temporarily take enforcement steps by way of summons rather than by issuing a fixed penalty notice to the value of £10,000 for offences relating to gatherings of over 30 people under Covid regulations.

“We gave this advice because of a potential disparity between those who opt to pay the FPN and those who see their case reach the court where the FPN would be means-tested against personal income. We are working with government to urgently address this matter, and once rectified, we intend to advise that forces resume issuing £10,000 FPNs wherever appropriate.”

West Midlands police said on Tuesday it would stop issuing £10,000 fines, having handed out 13 so far. David Jamieson, the region’s police and crime commissioner, said he had been left embarrassed.

In a letter to the policing minister, Kit Malthouse, Jamieson wrote: “There are, apparently, concerns of inequalities between those who opt to pay the fine and those who opt to go to court, where the defendant is then subject to means-testing before a fine is imposed.

“My force has so far issued 13 of these large fixed penalty notices as means of ensuring government regulations are enforced in the way you intended. The fact that the government has failed to provide our hard-working police officers with workable Covid legislation, I view with utter dismay.

“I feel thoroughly embarrassed that I have been personally supporting the government’s actions, which, at best, are questionable.”

A government spokesperson said: “It is right that we have a strong deterrent. We are working with forces to ensure people are fully aware of their options when faced with a FPN. If someone chooses not to pay their FPN, the matter may be considered by a court and the individual could be subject to a criminal conviction.”