There is no prospect of Dustin Johnson emulating the approach of Bernhard Langer, who turned heads by making a Masters cut at the age of 63 at the weekend. Johnson, the latest member of the exclusive Green Jacket club, is planning an abbreviated career.

“I feel really good about everything that I’m doing,” said the 36-year-old world No 1. “I feel really confident in my game. My goal is to play for about – I don’t know, it keeps getting shorter – but eight, nine, maybe 10 years. Then I’ll hang out with my kids and Paulina [Gretzky, Johnson’s partner]. Until then, I’m going to work my butt off to be as good as I can be.”

Intrigue surrounds how many more majors Johnson might collect in that window. Comprehensive success at Augusta – Johnson won by five shots, creating a Masters scoring record in the process – backed up his 2016 US Open win. “I want to get to three first but I dream of winning a lot of majors,” he said. “It just hadn’t quite happened yet. Hopefully this one will help, though, and give me a little spring.”

Im Sung-jae, who tied for second, on his Masters debut, with Australia’s Cameron Smith, candidly observed that Johnson was playing “at another level”.

Augusta was not as stern a test minus the tricks of spring but Johnson’s figures – 20 birdies, two eagles, the finding of 60 greens in regulation – were still seriously impressive. He three-putted once in 72 holes.

Johnson’s partnership with his younger brother and caddie, Austin, has been fully vindicated. Austin took over as a supposed one-off in China seven years ago. They duly combined to win the WGC-HSBC Champions event. 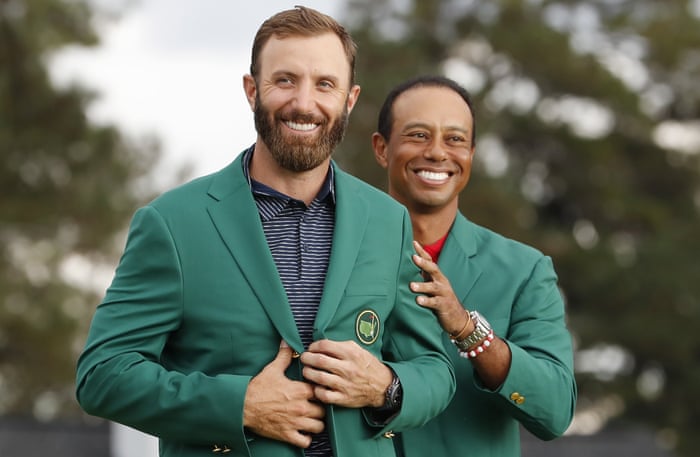 “When I started I was more of a buddy, someone for him to hang out with,’’ Austin said. “I’m a decent player. I know the game. But being a top caddie? Not even close. But I was a sponge. If I got close to ‘Bones’ Mackay [Phil Mickelson’s former caddie], I wouldn’t leave his side. I’d ask him everything I could. At these team events, I just learned and earned Dustin’s trust.

“It’s gotten to now, where he’s leaned on me pretty heavily out there. I’m just glad it has worked out the way it has.”

The feeling is mutual. “It’s unbelievable having my brother on my bag,” said the new Masters champion. “But he’s a big help, too. He reads the greens a lot for me, he does a great job reading them. He’s really good at it.

“I just love experiencing all these moments with him. I wouldn’t want it any other way.”

Johnson’s childhood home is 75 miles from Augusta. Quite naturally, winning a Green Jacket was a goal as soon as he started to play competitively. He had also been trending towards victory; in his past four Masters before this year he had a worst finish of joint 10th. He was denied a shot at glory in 2017 after falling down stairs in his rental home at the start of Masters week. More than three years on, the normally unflappable Johnson was in tears in the midst of a post-round television interview.

“Always around the putting green growing up, it was putts to win the Masters,” he said. “Or hitting chip shots, it was always to win at Augusta. Especially because I grew up so close to here. Growing up, that was all it was. As a kid, you dream of playing in the Masters, and dream about putting on a Green Jacket. I still kind of think it’s a dream.

“On the course I’m pretty good at controlling my emotions. But this means so much to me. It means so much to my family, they know it’s something that I’ve always been dreaming about and it’s why I work so hard. It’s something that you push yourself for. That’s why I work so hard, to be in this position. To finally have the dream come true, I think that’s why you see all that emotion.”