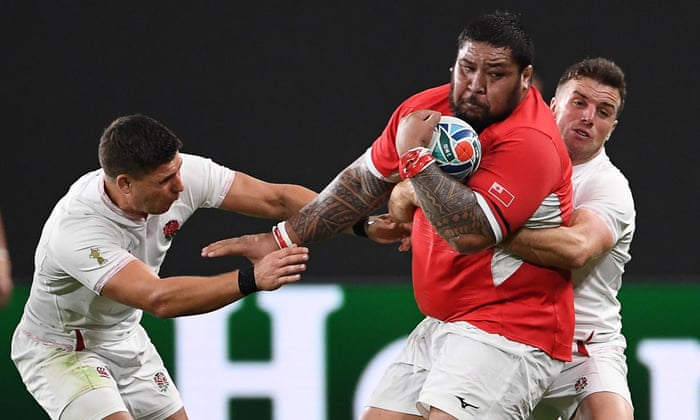 Of the many powerful images in Oceans Apart: Greed, Betrayal and Pacific Island Rugby, the must-see documentary made by the former Samoa forward Dan Leo and released this week on Amazon Prime, there are three that should be compulsory viewing for rugby’s administrators.

The first involves Rupeni Caucaunibuca, the best player in the world in his prime but now back in his remote home village in Fiji struggling to make ends meet and battling to fight back tears.

It is a similar story in a wintry Romania where Leo, the driving force behind the independent Pacific Rugby Players’ Welfare organisation, has travelled to visit Sione Vaiomounga, whose career was ended by kidney failure. When his club contract was abruptly terminated, Vaiomounga was left stranded, initially forced to rely on the church and local charities to feed his family.

The third involves Leo standing with some trepidation outside Samoa’s government building to meet the prime minister, who also just happens to be the chairman of the Samoan Rugby Union. There are plenty of palm trees and beautiful beaches in the hour-long film but the abiding message is clear: trouble is brewing in paradise.

Actually, brewing is the wrong word. It has been festering ever since rugby union, newly professional, realised the best players on the planet could be harvested for a fraction of the price needed to hire recruits from the sport’s elite nations. Leo, dropped from the Samoa squad after alleging corruption in his country’s union, argues passionately that World Rugby could and should be doing more to rectify the situation.

The fault lines have existed for years: the exodus of muscle to Europe, Australia and New Zealand, the colonial-style exploitation of cheap, often homesick labour and the loading of the dice in favour of the richest at the expense of those with little but their talent.

For decades there have been annual protests against the iniquitous arrangement by which the Rugby Football Union, in common with the other leading nations, retains 100% of the revenue from Tests at Twickenham while their island opponents receive not a bean.

In the decade that Leo played international rugby only Scotland among the leading unions returned the favour and played a Test in Samoa. When New Zealand did finally play in Samoa in 2016, the game made a loss of NZ$1m once all the expenses had been taken out. The average price of a ticket at the 10,000-capacity Apia Park is £4.

Not everything in life, and sport, can always be equal. Then again, Fiji, Tonga and Samoa – combined population of 1.5 million, fewer than live in West Yorkshire – supply over a quarter of the world’s professional players. Pacific Island talent is in such demand that promising players as young as 13 are now being targeted, often on the proviso they do not represent their homeland. Do they stay out of loyalty or go in search of a better life for their families? There is often no choice to be made.

World Rugby, it should be acknowledged, does a lot of work around the edges in terms of funding development coaches, extra kit, education programmes and sundry travel and accommodation costs to try to ensure better preparation for Fiji, Tonga and Samoa before World Cups or when they are touring in the northern winter. It has also underwritten Fiji’s presence in the current Autumn Nations Cup.

Leo, though, keeps returning to the same central theme: is there really enough impetus in high places for fundamental change, whether it be revenue sharing or “homecoming” eligibility which would allow, say, New Zealand players of island heritage who are no longer wanted by the All Blacks to return and play for their “second” nation, as happened before 2001?

“If they’re truly about growing the game globally, you’ve got to look at other options with open eyes,” says Frank Bunce, the former All Blacks and Samoa centre.

The official World Rugby line, reheated by World Rugby’s Brett Gosper in Oceans Apart, is that there is insufficient appetite to amend that regulation. To which cynics would respond that, given the lop-sided voting structure, it is not in the interests of the executive turkeys of Ireland, Scotland or anyone else to vote for Christmas.

Which opponent would want, say, Charles Piutau rampaging around for Tonga in a 2023 World Cup pool game when he could be safely out of the way in a Bristol jersey? Protectionism and naked self-interest invariably trump any notion of enhancing the international game or creating a more level playing field.

Clearly there are complications. Good governance can be elusive in certain unions where there is little separation between the ruling political party and the nation’s rugby hierarchy. But as Leo climbs Mount Vaea to visit the grave of Robert Louis Stevenson, the author of Treasure Island whose opposition to colonialism earned him legendary status in Samoa, it is tempting to see it as a metaphor for the islanders’ upward slog to locate a fair deal, never mind a pot of gold.

“This is a story about people, greed and power, about the endless pursuit of more and the precious things that are lost along the way,” Leo says. Is the idea of a hand up for Pacific Island rugby, not just a handout, really too much to ask?

It was not unusual to visit Sixways, the home of Worcester Warriors, and find an unobtrusive white-haired gentleman quietly helping to clear up litter before or after games. To say Cecil Duckworth put his heart – as well as a sizeable chunk of his personal fortune – into Worcester would be an understatement; without him the club would never have made it from the lower leagues to the Premiership. Professional club rugby has known a wide variety of investors but Duckworth, who has died aged 83 after a lengthy illness, was as selfless and unassuming as any.

Barely has the previous campaign ended than the new Premiership season kicks off on Friday. The backdrop could best be described as problematic, with international fixture clashes, financial problems, Covid-19 worries, head-injury concerns and potential burnout all threatening to overshadow the actual rugby. It makes it hard to predict the most serious challengers to the champions Exeter but Sale, Wasps, Bristol and Bath should all be jostling for top-four status. And the bottom? Let’s just say Leicester will be desperately keen for the Premiership to be ring-fenced between now and June.