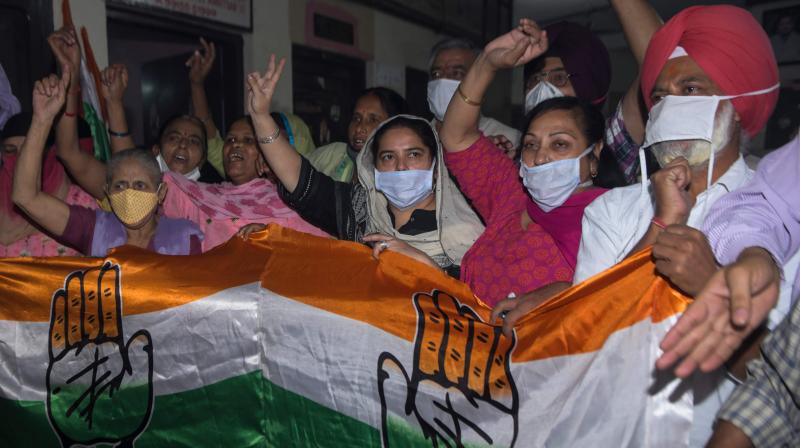 New Delhi: Even as Nitish Kumar begins his record fourth term as Bihar chief minister, the Congress Party is in the throes of a meltdown over its disastrous performance in the Assembly polls which prevented the Grand Alliance from winning the elections by a hair’s breadth.

The Congress, which could win only 19 out of the 70 seats it contested in the just concluded Bihar polls, is largely being held responsible for the debacle of the Mahagathbandhan or the Grand Alliance with the Left parties and the Rashtriya Janata Dal having performed far better.

This has led to many senior Congress leaders, who were already on a warpath over the “organisational mess in the party”, to speak out again. Sources told this newspaper that the group of 23, which comprises leaders who had written a letter to Congress president Sonia Gandhi expressing their grievances in late August, are planning to take up the Bihar polls debacle, too.

Sources said that the leaders are waiting for Congress treasurer Ahmed Patel to recover from Covid-19. Mr Patel, who is known to be very close to Congress president Sonia Gandhi and has been her political secretary, is currently in hospital.

Senior lawyer and Rajya Sabha MP Kapil Sibal, who is one of the leaders among the group of 23, has already come out in the open saying that the party is unwilling to introspect.

Mr Sibal added that there was “reluctance because the CWC is a nominated body. Democratic processes must be adopted and embraced even in the constitution of the CWC, which is reflected in the provisions of the Congress' constitution itself”.

Among others who have spoken out are Tamil Nadu MP and former finance minister P. Chidambaram’s son Karti Chidambaram and Bihar Congress leader Tariq Anwar.

Mr Anwar said on Sunday that the Congress must learn from the Bihar debacle and complete alliance formalities well in advance for upcoming Assembly polls. He, however,claimed that the high command was serious about introspection as well as a thorough analysis of the results.

Sources said that the issue was likely to be taken up at the AICC meeting which is likely to be held in late January or early February and preparations for which have already begun.

In August, when the 23 senior leaders had raised issues critical to the party organisation, they were confronted and accused of being disloyal at a meeting of Congress leaders which was attended by both Sonia Gandhi and Rahul Gandhi.