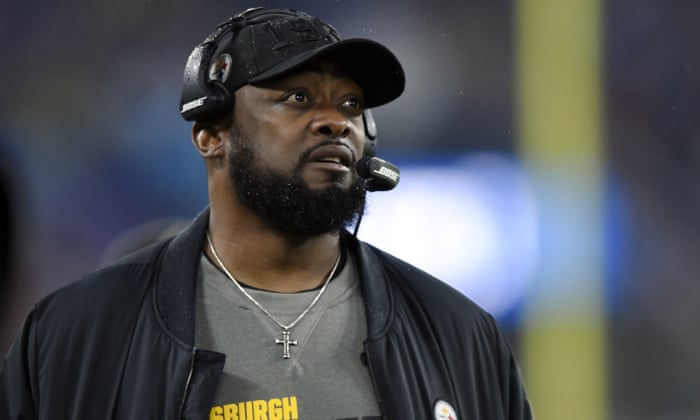 No practice, no problem.

At least that’s how the Steelers made it look as they cruised to a 36-10 victory over the Bengals on Sunday. The win took the Steelers to a perfect 9-0 record for the season, and it’s time to start whispering about – if not discussing – the possibility of an unprecedented 17-0 season. And all this in a week in which Mike Tomlin’s team was forced to practice without their quarterback, Ben Roethlisberger.

Roethlisberger spent the week leading up to the game in self-quarantine, attending practice via his iPad, after tight end Vance McDonald tested positive for Covid-19. Tomlin adjusted. The Steelers coach held a limited Friday practice and instead held a long walk-through on Saturday when Roethlisberger was activated from the Covid list and the team had a final chance run through the gameplan in person. It worked, offering a timely reminder of the thing that separates the coach from the vast majority of his peers: Droning excellence.

Coaches are typically shoved into two distinct buckets. They are either a CEO, overseer of the program type, or an X’s and O’s savant, someone who can outscheme and outthink the opposition. The best of the best – Bill Belichick, Bill Walsh, Vince Lombardi – are the ones who slot into the rare third bucket: they excel at both.

Tomlin has always been closer to that rarefied air than the caricature that plops him in the one-dimensional, condescending, cheerleader-like role – a characterization dripping with racial undertones.

Simply: Tomlin has proven to be one of the very best to ever do it. Just last week, he tied an NFL record by registering 14-straight non-losing seasons to open his career. It’s an achievement that got little mileage – because Tomlin and the Steelers’ excellence has become such a part of the furniture; their excellence so mundane and predictable that every loss constitutes some kind of time to rebuild conversation.

There remains a tinge of a stigma attached to the idea that Tomlin inherited an excellent, Super Bowl-winning team from Bill Cowher. As though he should have been winning in those early years, as though all succession plans run smoothly. It’s a perception that hovered over the early part of his run until he was able to clinch a Super Bowl of his own. And while it’s true that Tomlin inherited a team littered with Hall of Famers on the defensive side of the ball, and it’s true that he inherited a future Hall of Fame quarterback, albeit one who will likely wind up in the pantheons second-tier behind the generation’s top stars – Tom Brady, Peyton Manning, Aaron Rodgers, and Drew Brees – it’s also true that he has continuously. That he took a solid foundation, built on it, and then found sustained success that has so far only been matched by Belichick and the Patriots in the salary cap era.

Like Belichick, Tomlin has consistently reinvented his team on both sides of the ball. As Roethlisberger aged, so the Steelers offense has changed. There was run-heavy, play-action oriented hangover from the Cowher years. Then there was the fun ‘n’ gun days of Le’Veon Bell and Antonio Brown and Martavis Bryant. Now, it’s the confuse and clobber era of James Conner, JuJu Smith-Schuster and Chase Claypool. And always, by organizational fiat (almost by civic duty), there has been a feisty defense – the Steelers’ calling card and Tomlin’s area of expertise.

Tomlin’s defensive record had soured in recent years as criticism started to tick up and up. Pittsburgh diversified their scheme and slimmed down in order to keep up with the evolving pace-and-space age, but Tomlin’s group was inconsistent and sloppy.

The trade to bring in Minkah Fitzpatrick prior changed everything. Tomlin’s group rediscovered its mojo after a 24-month identity crisis. Tomlin doubled down on an all-pressure, all-the-time approach that is, by definition, boom or bust. With the all-everything Fitzpatrick on board, a whole host of busts turned into booms. Heading into Week 10, the Steelers ranked second in the league in defensive efficiency and second in adjusted sack rate.

It’s important to remember how different this season could have benn. Roethlisberger is 38. Not a game goes by without the quarterback nipping to the locker-room to get something checked.

Navigating those uncertain waters is tricky. There is a world in which an obviously washed Roethlisberger limps around the field, the Steelers offense stalls, the defense is overwhelmed, and there are rumblings that the fanbase or locker-room is unhappy with Tomlin. There is a world in which this Steelers season devolves into Peyton Manning’s final ride with the Broncos. An obviously finished quarterback being carried by an-out-of-this-world defense, who is, effectively, retired by the league before he himself is ready to move on.

But Roethlisberger has rallied, and Tomlin and the Steelers have constructed a savvy ecosystem in which he can thrive. Sunday’s drubbing of the Bengals represented the best of both worlds: An in-control-of-everything Roethlisberger guiding the offense and a disrupting-everything-defense.

It’s a style that has Pittsburgh on the path to achieving something special. And in doing could alter the legacy of a coach who for too long has been overlooked as one of the modern greats.

Imagine trading DeAndre Hopkins. Look at the elevation. Look at the strength. There were three defenders draped all over the receiver as he leapt to grab the last-second Hail Mary that sealed the Arizona Cardinals’ victory over the Buffalo Bills. Three. And he caught it! A special mention should go to Kyler Murray, too, who evaded pressure and was able to buy Hopkins enough time to get into position.

Murray was outstanding all game. Baseball is great, but all of sports fandom should be delighted that Kyler Murray picked football over MLB.

Tom Brady, QB, Tampa Bay Buccaneers. Brady rebounded from last week’s rough performance against the Saints with a vintage outing against the Panthers. Brady completed 28 of 39 passes for 341 yards and three touchdowns. He also had a rushing touchdown, courtesy of the classic Brady sneak, tacked on for good measure.

Brady should have had more. He left three touchdowns on the field, missing Mike Evans on two wide-open throws in the end zone and missing Rob Gronkowski on a third.

The Evans issue, so much that is an issue, is a nice microcosm of where Brady and the Bucs offense is at through 10 weeks. When it’s clicking, there is nothing a defense can do to stop it; when it’s off, things can look ugly. And yet even then, the Bucs offensive issues are more self-inflicted – missed throws, dropped balls, sloppy penalties – than systematic flaw. That bodes well heading towards the playoffs. 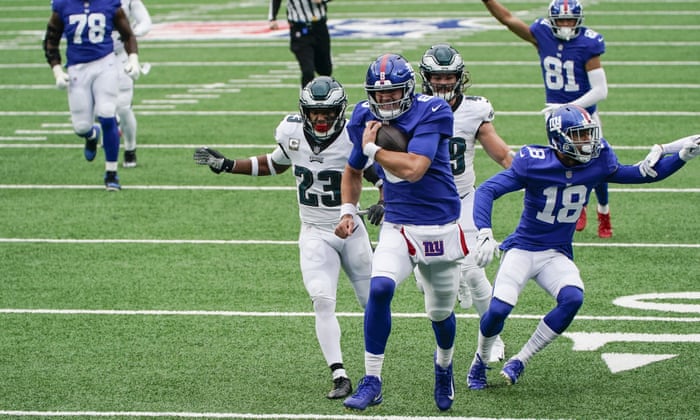 At 3-5-1, the Eagles remain in first place in the NFC East

It’s time to have the conversation: Is the 2020 NFC East the worst division in the Super Bowl era?

On Sunday, the Eagles were comprehensively beaten by a Giants team that views ‘awful’ as a state it would delighted to achieve at some point in the future. Somehow, Philly helped turn the Giants offense into an efficient, explosive group. The Eagles had no answer to the Giants’ use of Daniel Jones in the ground game, a tactic Jones and Co would lean on in crucial spots (there is an uncomfortable amount of Blake Bortles to Jones’ game and there remains a startling amount of Bortles-like usage in the Giants’ gameplan).

Worse: The Eagles couldn’t manage to scrape together any kind of offense. They finished 0-for-9 on third downs against a Giants defense that ranks 22nd in the league in defensive efficiency.

The NFC East: A division where being objectively bad will ‘reward’ you with a home playoff game. At this point, do any of the non-Washington franchises want to finish at the top of the division? At 3-7, the Giants now have a real chance.

“He just came up to me and said, ‘Hey, I don’t feel like I’m capable of playing’” – Saints head coach Sean Payton on Drew Brees.

Is it time for JameisBall? At least for a little while? Winston was forced into relief duty against the 49ers on Sunday after Drew Brees sustained a rib injury. Brees complained of pain in his back and removed himself from the game prior to the start of the second half.

Winston was solid, completing 6 of 10 passes for 64-yards in a 27-13 win. Brees will receive an MRI on Monday to see if the injury is serious. If it is, Payton will hand the keys to the NFL’s best roster to the game’s most volatile pass thrower. It may not be effective, but it will certainly be fun. 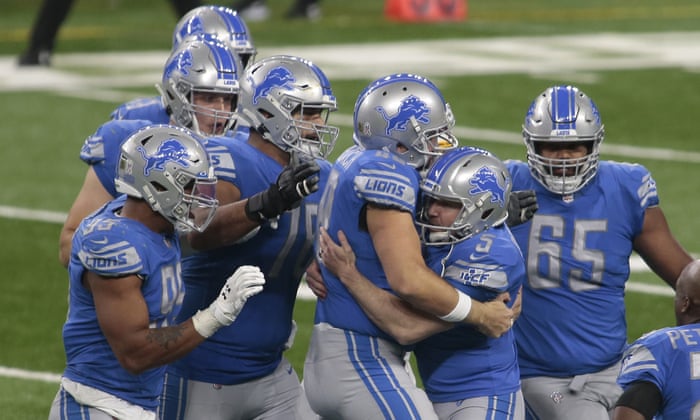 – Detroit did everything possible to blow their matchup with Washington. The Lions led 24-3 late in the third quarter. By the final 15 seconds of the fourth quarter, the game was tied up at 27 points apiece. A 59-yard field goal from Matt Prater helped the Lions to clinch the game as time expired, lifting them to 4-5 on the season and most likely preserving Matt Patricia’s job for the foreseeable future.

– The Washington-Detroit game also saw Alex Smith make his first start in 728 days. The last time he started a game Smith sustained a career-altering compound fracture to his leg. Doctors feared they would have to amputate his leg. His physician feared an infection could cost him his life. He was told he may not walk again; was told he would not play football again. On Sunday, he not only started, but he also threw for a career-best 390-yards while rallying his team back from a 21-point deficit to tie the game with under a minute to play.

– The Seahawks are regressing. Nothing much went right for Seattle in a 23-16 loss to the Rams, but it was less the result and more the manner of the defeat that will sting. The early season formula – let Russell Wilson cover up for all of the issues – has taken a hit. When Wilson is not perfect, the Seahawks are exposed as an imperfect team with a poor defense.

– The Dolphins moved to 6-3 with a comfortable win over the Los Angeles Chargers. Over the past five weeks, Brian Flores’ team have beaten opponents to the collective tune of 158-86. With an all-action defense, an outstanding special teams unit, a solid run game, and a sprinkling of Tua magic, the Dolphins have hit on a winning formula that will be a handful for anyone down the stretch.

Dustin Johnson realises Masters dream with caddie brother at his side