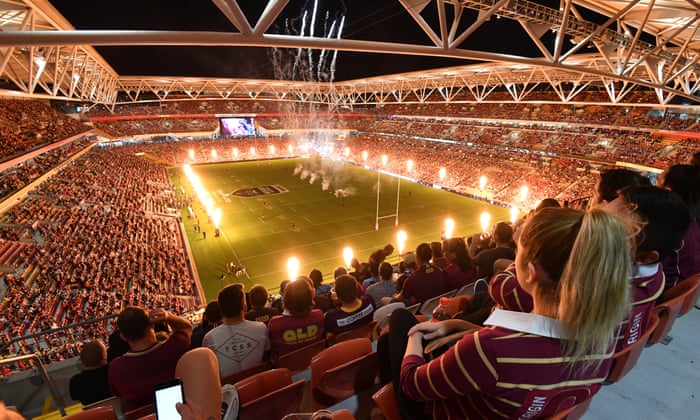 The Australian rugby league fraternity has a tendency to pontificate that their code is “the greatest game of all”. On Wednesday night, it really was the greatest – at least numerically – as it became the envy of sporting fans and organisations across the world.

Suncorp Stadium’s official crowd at the State of Origin finale between Queensland and New South Wales was 49,155. It is believed to be a world record since Covid-19 shut down sport.

The figure, while not quite a sellout at the 52,5000-capacity stadium due to some lingering biosecurity measures, eclipsed last month’s 46,061 attendance at Auckland’s Eden Park for the Wallabies’ loss to the All Blacks. That Bledisloe Cup crowd was larger than the 29,707 at the AFL grand final at the Gabba, which itself had been the biggest attendance at a sporting fixture since 86,174 watched the Women’s T20 World Cup final at the Melbourne Cricket Ground on 8 March. That was three days before the World Health Organisation officially declared the coronavirus a global pandemic.

In the eight months since then, home-ground advantage has all but evaporated globally. Origin is quintessential sporting tribalism. Rapture wrapped in rage and catapulted into every poor sod stationed in its general direction. The annual tit-for-tat is often more about the people in the stands than those on the field and cardboard cutouts, innovative though they are, lack the required partisanship.

Not so long ago, Wednesday night’s setting was widely perceived as unfeasible, if not plain stupid. The country was in its first lockdown while the indefatigable ARL Commission chairman, Peter V’landys, worked bullishly to persuade sceptical health authorities, governments and broadcasters the NRL should and could resume as early as 28 May.

When the competition did restart – second only to the Bundesliga – other countries observed with curiosity. Moving so quickly was a fine line to tread at the mercy of a pandemic that does not follow logistical rules. Now V’landys and his administration have got away with it, other industries are seeking the NRL’s advice as they feel their own way through this international mess.

That is still the case domestically, as South Australia scrambles to contain a new cluster. Origin has even infiltrated petty political border wars, featuring a text exchange between NSW premier Gladys Berejiklian and Queensland counterpart Annastacia Palaszczuk, in which the latter was accused of “rubbing in” NSW’s series-opening loss at Adelaide Oval. Last week, after the Blues levelled the series at Sydney’s ANZ Stadium, Palaszczuk announced the state was lifting the cap on crowds from 75% of stadium capacity to 100%. “I think Queenslanders are going to be very, very happy with this outcome,” she said. “Let’s fill Suncorp and cheer our mighty Maroons on.”

And so, as top-flight football leagues in Europe play in front of empty stands and virtual crowds, real ones piled into Suncorp Stadium, hardly a 1.5m gap in sight under bright lights and dancing flames that lit up social media with a mass bewilderment reflecting the challenges of so many living in graver circumstances. With the Queensland borders still closed to the greater Sydney region – the location of a recent cluster – there were precious few Blues scarves speckled in stands otherwise flooded by Maroons regalia, at a venue where NSW have won just twice since 2010. 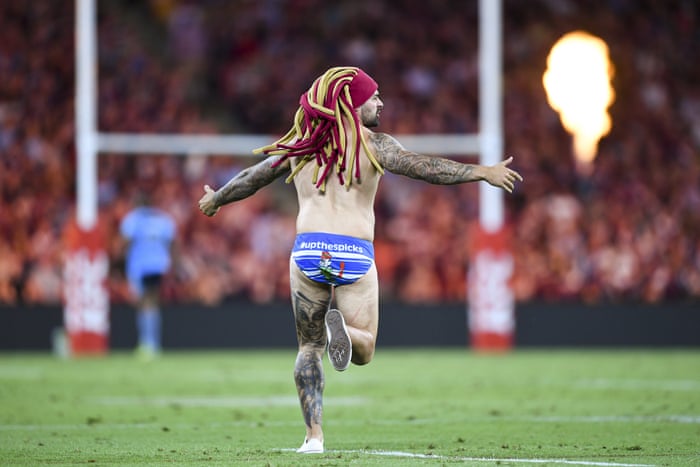 Fists were shaken and arms flailed, players heckled, and humanity momentarily replaced with shrieks for blood that only intensified 20 minutes in when James Tedesco’s head ran into Josh Papalii’s frighteningly large knee, knocking out the stand-in NSW captain and ending his night immediately. If that was not evidence of normality resumed, a streaker gave support marshals a surprise second-half workout.

Andrew Johns had predicted pre-match the support would give the Maroons a 12-point head start. The NSW great turned pundit was not too far wide of the mark, for they were up 6-0 inside four minutes Some five minutes later the scores were level, though parity was fleeting.

Queensland health authorities did not go so far as to let in Ray Warren, the voice of rugby league who, in all his 77 years, had never called a game remotely. Without permission to avoid the compulsory 14-day quarantine, Warren and his commentary team provided play-by-play updates from the Nine Network’s Sydney studio. Those at home could not hear the vocal directives between players and officials with anywhere near the same clarity as a Premier League game with the crowd noise disabled. Maybe that is the point.

Wayne Bennett, dressed in a tailored maroon blazer befitting his position as Queensland coach, remarked that “the whole city was gridlocked as we were trying to get to Suncorp”. There was traffic at the turnstiles, too, proving everyday fans have not addressed matters of punctuality during their time off. Many had made it to their seats in time for the Welcome to Country, and more still for the Australian national anthem, controversial in its very presence after the NRL reneged on its decision not to play it during this year’s series.

Eighty minutes on, by the time some of Bennett’s triumphant squad members had poured a celebratory tub of blue Powerade onto his head – and that suave blazer – most fans had departed. But they had been there, and the world had seen it.