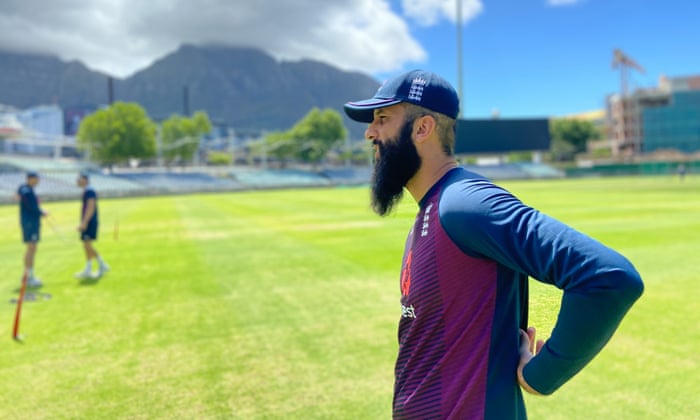 Moeen Ali has long been a cricketer who either delights or frustrates, but after an 18-month spell that has chiefly been the latter, the all-rounder begins England’s tour of South Africa knowing he needs to rediscover his form sharpish.

The six-match trip may appear low-key in some respects but the first half – three Twenty20s starting on 27 November – is a rare chance for England to field a full-strength side before Ben Stokes, Jofra Archer and Sam Curran fly home to rest.

A packed schedule means such opportunities may be fleeting before the squad for next year’s T20 World Cup in India is selected and so for Moeen, who sat out the back end of last year’s victorious 50-over campaign, the incentive is clear.

“My priority is to try to get my game to the level I know I can get it first of all,” Moeen says in the buildup to the team’s first training session at Newlands on Wednesday. “There’s an opportunity to become one of the greatest sides ever. I want to give my all in the next couple of years to try and be part of this.”

Having lost his place in the Test set-up last year, a career of exactly 200 caps across all three formats does appear to be at something of a crossroads and the 33-year-old admits the management have shown considerable faith in him of late. Moeen has returned just one half-century in 13 international white-ball innings over the past year and seen the wickets dry up too, while his recent time in the Indian Premier League was spent mainly warming the bench.

There is little doubt that Moeen on form makes England a better side, however, and in the shortest format a cameo can itself be game-changing. A decent reminder came during their visit to South Africa earlier this year, when his remarkable 11-ball 39 in Durban helped Eoin Morgan’s fight back for a 2-1 series victory.

“I know I haven’t got that long left in international cricket, depending on fitness and form, but I’ll try my best to get to that level,” Moeen says. “It’s been frustrating for me, mentally. That hunger has not been there in the last year or so. There have been glimpses but I know deep down I haven’t done well over a period of time.

“It’s my job now to go out and perform. I need to get into a good mental space, which I have been working on for the last four or five months. It’s been difficult. But it’s about clearing everything out and starting afresh.

“It’s about being smarter, working harder and knowing I haven’t got that long left. There’s such an opportunity with the T20 World Cups, the Ashes, the 50-over World Cup. It’s almost about having those targets and doing everything I can for those.”

The mention of the Ashes here is notable. Though Moeen opted out of selection for last winter’s Test squads, he still harbours ambitions in the longer format. With Adil Rashid indicating he is not ready to return with the red ball, it will be a boost for the selectors looking to the away tours in Sri Lanka and India after Christmas.

Moeen’s previous series in those countries were success stories, too. In Sri Lanka in late 2018 he took 18 wickets to set up a 3-0 series win, while his tour of India four years ago produced two of his five Test centuries to date. Batting-wise, he believes overconfidence has become more of an issue.

“I have never had doubts like that, sometimes it’s about being more clear. I never go into a game or to bat with doubts,” he says. “If anything I go too far the other way, sometimes I feel I’m in before I’m in and that’s been my downfall.”

While Morgan’s white-ball team are on tour, back home the England and Wales Cricket Board has become embroiled in accusations of institutional racism by two former umpires, John Holder and Ismail Dawood, who believe the path for non-white match officials has become blocked. It comes at a time when Yorkshire are also investigating claims of racial discrimination at the club from their former spinner Azeem Rafiq. But when asked about his own rise through the ranks as a British Asian cricketer, Moeen has only positive experiences to report.

“I can honestly say, hand on heart, that I have never experienced anything like that. I always felt that if you were scoring runs or taking wickets you’ll play. I have now been playing for England for six years and always felt at home, always felt like one of the guys.

“I am sure there are other guys who say they have and I am sure things have and will be done about it. The ECB are improving in all these aspects of the game. No one is perfect, but going forward, I think a lot will be done to get all these things right.”