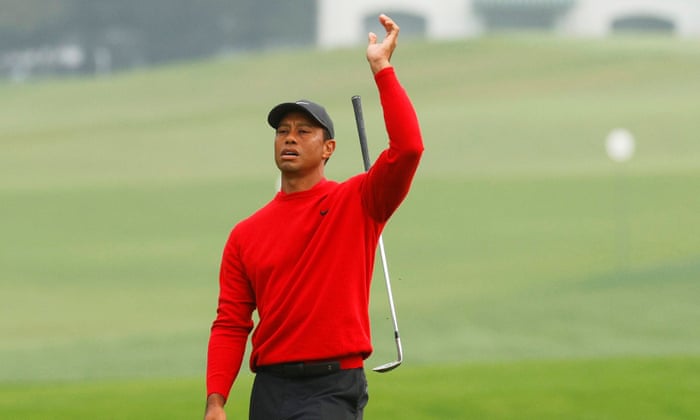 1) Even Tiger Woods can take a 10, after Rae’s Creek dealt him the first double-figure score of his professional golf career. At least it wasn’t a 16. Alas, we couldn’t find footage of Ray Ainsley’s 23 at Cherry Hills from the 1938 US Open. Shot of the week at Augusta, though, has to be this from a practice round by Jon Rahm. Bars of the week, however, go to Chris Vernon. Say amen at the cornah!

2) Here’s your NFL play of the season so far: Kyler Murray to DeAndre Hopkins. For. The. Win.

3) Surf Girls Jamaica: a short documentary tells the story of Imani Wilmot, who uses the sport as a means of transforming the lives of women around her.

4) History for the Pumas as they beat the All Blacks for the first time. Cue the Argentina fans.

5) Around the world of football: Nicolai Geertsen’s remarkable one-two off the bar for Lyngby in the Danish Cup; an instant response from Kazakhstan; own goal of the week from the J-League (at 2m20s); Renato Augusto’s five magical touches for Shimizu S-Pulse (at 1m29s); and a joyously satisfying team goal from Brazil’s Série D. Speaking of joy, here’s some Ryan Christie after Scotland’s Euro 2020 qualification.

Only just catching up on this immensely satisfying team goal from Brazil’s Série D pic.twitter.com/wcTpUvs9I9

6) The 50th edition of the ATP Finals – formerly known as the Masters Cup – is under way in London, so here are some highlights from down the years starting with grainy footage of Ilie Nastase beating Stan Smith in Barcelona back in 1972. Two years later, Nastase lost a five-set final to Guillermo Vilas on grass in Melbourne. Other five-set finals include Lendl v Gerulaitis in 1981 and Becker v Lendl in 1988, both at Madison Square Garden. Boris Becker also went the distance with Pete Sampras in Houston in 1996, while the final five-setter before the format was changed came in 2005 as David Nalbandian sank Roger Federer in Shanghai.

7) Bury: Bringing Football Back. The full BBC documentary is here.

8) Judd Trump hit his fifth career maximum in a win over Gao Yang at the Northern Ireland Open. From 2018, here’s Ronnie O’Sullivan snatching an extraordinary win over Mark Selby. And while we’re here, how about an hour of break-building brilliance from 1991?

Apologies that comments were not opened last week. This was due to a production error. Please leave your recommendations below the line.