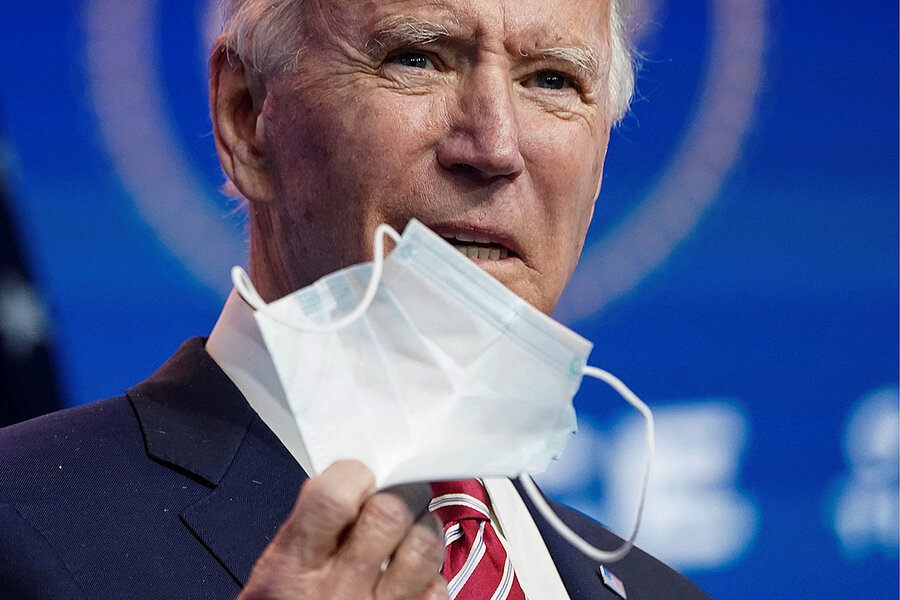 Under normal circumstances, an American president-elect and his team have 2 ½ months to effect an orderly transition with the outgoing administration. Intelligence is shared, potential threats are flagged, policies and operations are explained.

But these are not ordinary times. As winter approaches, the COVID-19 pandemic is surging, and President Donald Trump continues to fight the overwhelming evidence that he lost the Nov. 3 election. His administration has yet to allow the routine transition process to start, amid concern it would signal that the president has conceded defeat.

Analysts point to the risks a delayed transition could pose to national security. But there could also be an immediate impact on fighting the pandemic, officials say. Without a formal transition, for example, the Biden team cannot access the administration’s COVID-19 data and vaccine distribution plans. Anthony Fauci, the nation’s top epidemiologist, has warned of a slower rollout of potential vaccines.

President-elect Joe Biden, too, speaks of potentially severe outcomes from the delayed transition. “More people may die if we don’t coordinate,” Mr. Biden said at a press conference Monday.

To date, the nation’s COVID-19 caseload has topped 11 million people, with more than 245,000 deaths. Public health experts warn of a dark winter ahead.

“You are seeing right now a replay of the overwhelmed health care system” from earlier this year, says Elias Zerhouni, former director of the National Institutes of Health under President George W. Bush. “People are exhausted. The first responders are out of their wits.”

Add to this a president who appears mostly focused on politics. President Trump has not attended a White House Coronavirus Task Force meeting in more than five months, task force member Adm. Brett Giroir acknowledged Sunday, though he added that Vice President Mike Pence briefs the president on the meetings. The task force last met Monday in a briefing for governors.

What the country needs: a bipartisan situation room

Given the magnitude of the public health crisis, a joint Trump-Biden effort on COVID-19 would make sense before Inauguration Day, Dr. Zerhouni suggests.

“A situation room [should be] created, which should be bipartisan with the current and future administration,” the former NIH director says. “That is the reasonable thing to do for the country.”

Such a joint effort seems far from likely, given the hyperpartisan atmosphere. But Biden team members are hardly standing idly by, and have found workarounds as they prepare to take on the expected federal role – including public messaging and state coordination – in combating the nation’s worst pandemic in more than 100 years.

Epidemiologist Kenneth Bernard notes that the Biden transition team is reaching out directly to local and state authorities.

“That’s the only option open to them,” says Dr. Bernard, who ran offices on global health threats in the Clinton and second Bush White Houses. “The Biden team is truly nailing it, given the constraints they’ve been put under.”

What he sees as a federal leadership vacuum in public health practice presents an opportunity for the Biden team. It gives them “a little opening to at least reach out to the states, because they know that in 60 days this is going to be the new policy director for the United States,” Dr. Bernard says.

Dr. Atlas, who is a neuroradiologist and not an epidemiologist, has tweeted that masks don’t help stop the spread of COVID-19, contradicting guidance from the Centers for Disease Control and Prevention. On Monday, Stanford University put out a statement distancing itself from Dr. Atlas, who is a senior fellow at the university’s Hoover Institution.

Dr. Fauci, a civil servant and member of Mr. Trump’s coronavirus task force, is also ubiquitous on TV and expected to remain a key public health voice under a President Biden.

On Tuesday, Dr. Fauci said the nation needed a more unified, national approach to combat the virus. “We need some fundamental public health measures that everyone should be adhering to, not a disjointed ‘One state says one thing, the other state says another thing,’” he said at a virtual conference.

Paul Light, a professor of public service at New York University, says that during a normal presidential transition, there would be lots of mutual learning on both sides, as the old team prepares to hand off to the new team.

In the case of the Biden team, a benefit is that it’s only been four years since the Democrats handed over the reins to the Trump team. Memories are that much fresher, though of course they left office before the coronavirus pandemic started. But top players in the Biden team have experience dealing with viral disease outbreaks, starting with incoming Biden chief of staff Ron Klain, who served as President Barack Obama’s “Ebola czar” in 2014 and 2015.

“Under normal circumstances, many of these meetings [of transition teams] are friendly, to a point,” says Professor Light. “The best form of transition briefing is interactive and involves mutual learning. There can be a kind of drop-your-swords thing going on.”

This time, he suspects, “that ain’t happening.”

At local level, it’s all hands on deck, every day

On the ground, in local public health departments around the country, the challenges have been the same for months, but now, amid the latest surge, it’s all ramping up again – and it’s exhausting.

“We have to be in all-hands-on-deck response mode every single day,” says Lisa Macon Harrison, public health director for Granville and Vance counties in rural North Carolina.

North Carolina public health is decentralized, which means local officials have a lot of authority and regulations vary among counties. Communication is a challenge, she says, and her department has to stay in contact with national, state, and local leaders, while also monitoring trends at each level.

“We’re doing an amazing job with the resources we have [but] we could always be doing better,” says Ms. Harrison, a board member of the National Association of County and City Health Officials. “It’s hard and it’s a very long response. And that gets our folks kind of tired around the edges.”

“It’s just sad that the sanctity of life and the promotion of health is not something that feels like a unifying force for Americans,” Ms. Harrison says. “This should be easy for us to come together and decide to fight together and to keep our neighbor and our family and our friends safe. That shouldn’t end up being a political infight.”

When asked for sources of optimism, policy analysts say they hope that once there’s a presidential transition, the politics of the pandemic will fade. Even before a transition, there’s no reason good work can’t happen.

“There are people still on the Trump team, still hanging around, doing the right thing,” says Professor Light. And “my hunch is that the Biden team is way up to speed. There’s an awful lot of expertise there.”