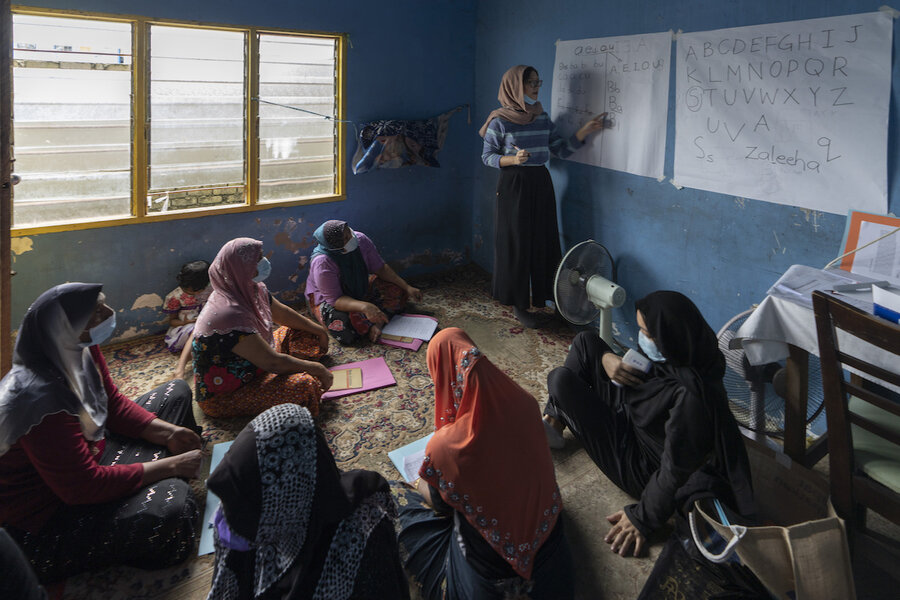 In a bare room, students seated on the floor recite the alphabet. But these are not children. The students are refugee women who for the first time are learning how to read and write, both in Malay and English.

The weekly classes in a dingy neighborhood outside Kuala Lumpur are offered by the Women for Refugees group, which was formed in September by two law students to help illiterate migrant women integrate into the local community and empower them to be more than just passive wives.

“I don’t know even know my ABCs, but now I am learning,” Zaleha Abdul, a Muslim Rohingya refugee, said as she struggled to remember the alphabet during a class last month. She said she wants to be more independent when going shopping or anywhere else.

Like Ms. Zaleha, many refugee women in Malaysia have picked up the local tongue, but without knowing how to read or write, they are mostly confined to familiar surroundings.

Arissa Jemaima Ikram Ismail was a volunteer with a relief agency when a refugee leader in the town of Selayang, which is home to many migrant workers, requested help to uplift women in his community.

She and fellow law student Davina Devarajan then met some of the women and were surprised that they wanted to learn the English and Malay languages. For most refugee women, education is often viewed as a low priority, Ms. Arissa said.

The duo then formed Women for Refugees and recruited teachers via Instagram. They now have about 20 volunteers, giving weekly two-hour literacy classes in English and Malay in a rundown two-story block that houses some 50 families.

“It was very essential for us to not pitch the refugee women as a charity, where they are constantly requiring external aid,” Ms. Arissa said. “We want to equip them with the necessary skills so that they can sustain themselves … and contribute back to the community.”

The free classes are open to all migrant women, although currently the students are all from Myanmar and Indonesia.

Over a dozen women, ranging in age from 18 to 50, initially attended, but they brought along their children, which proved to be disruptive. The group then launched classes for the children in a separate room so that their mothers could study in peace.

In the long run, Ms. Davina said they hope to expand classes in other neighborhoods and include technical skills that could help the women earn an income.

All classes have, however, been halted since mid-October in tandem with restrictions put in place in Kuala Lumpur and surrounding areas to curb a fresh surge in coronavirus cases. The restrictions were expanded to most of the country this month, and all schools nationwide were shut until the end of the year.

Ms. Arissa said teaching still goes on with pre-recorded lessons that are viewed on three shared laptops in the migrants’ living quarters, and that live classes were also being conducted once a week for older migrant children.

She said that as the coronavirus subsides, she would “love to integrate more volunteers … to actually come and teach them and have this very community-based integration between” the women and the locals, many of whom view migrants as a burden on the country’s resources and healthcare system.

Ms. Arissa’s group is not the first to offer literacy courses for refugees in Malaysia, but one of only a few to focus on women. Some 178,000 refugees and asylum seekers in the country are registered with the United Nations High Commission of Refugees, and many pockets of the refugee community are left out in terms of educational opportunities.

When The Associated Press visited in October before the classes stopped, Shahidah Salamatulah, was among three women learning how they would communicate in English if they had to seek treatment at a medical clinic. The women broke into giggles at the antics of their Algerian volunteer teacher.

Ms. Shahidah, a Muslim from Myanmar and a mother of two, said she was preparing for a new life abroad. She was called for interviews three times last year by the UNHCR on possible resettlement to a third country, but there has been no news amid the coronavirus pandemic.

“English is important for us … when we go overseas we will need English,” she said.