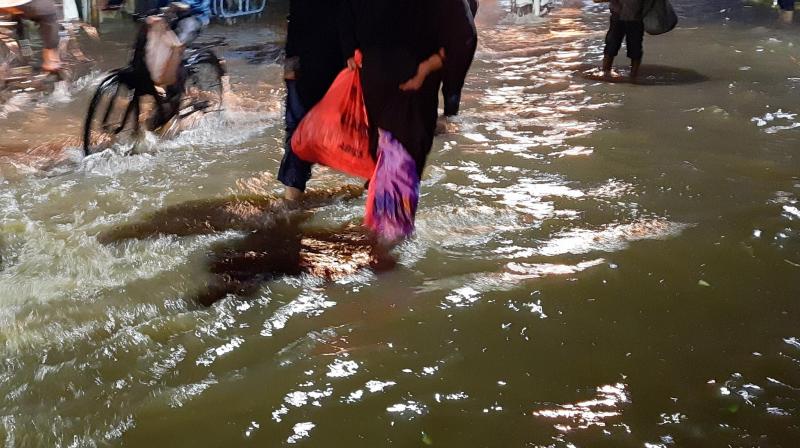 HYDERABAD: “The TRS will repeat its victory in Greater Hyderabad Municipal Corporation (GHMC) elections winning 104 of 150 divisions. We don’t care about the Bharatiya Janata Party’s Dubbaka win, which is just a passing cloud,” asserted animal husbandry minister Talasani Srinivas Yadav.
The minister spoke exclusively to Deccan Chronicle about GHMC polls, agenda of the TRS and how they will win 104 seats in the civic body elections.

How will you win 104 seats? On what aspects is your confidence based?

The TRS government and Chief Minister K. Chandrasekhar Rao’s vision and our young minister K.T. Rama Rao’s hard work will get us majority of the seats in Greater Hyderabad elections. Several welfare schemes and developments activities have been taken up by my government in the GHMC area. This will ensure us a thumping victory. Past governments did not seriously take up public health issues, proper education system, law and order, CCTVs for surveillance, roads and connectivity, investments, vital installations and development of poor people. TRS has dealt with all these issues successfully at the level of international standards.

Is there any anti-incumbency feeling among people against the government, particularly in the flood-affected areas? Will that impact your victory?

Opposition parties are spread negative propaganda on the floods issue. Past governments had neglected encroachments on drains and nalas. The present problems are because of that. We are working 24/7 for people in the flood-affected areas. Our minister K.T. Rama Rao visited affected areas and interacted with victims. He gave them assurance about setting matters right. The Chief Minister has expressed his concern personally and announced financial assistance to victims. Opposition party leaders are not interested in highlighting the financial assistance that the government is providing to flood victims. They are only making allegations against the government and spreading wrong propaganda within the public. We will go to the public and will explain the reality. Our in-charges, who have been deployed in the city for elections, will go and explain to people the development activities that the government has taken up.

The Congress and the BJP are targeting the TRS on double bedroom scheme? Will it become a major hurdle for the government in the campaign?

No, we will explain to the public, especially the poor people in Hyderabad, that we are constructing one lakh double bedroom houses within the Greater Hyderabad Municipal Corporation area. I had challenged Congress legislature party leader in Assembly Bhatti Vikramarka about showing him the double bedroom houses. I personally went to his home and took him to visit the 6–7 areas where 90 percent of construction has been completed. On the third day, some Congress leaders tried to intentionally stop the visit. Here, I will also share an important point. In 2007, Y.S. Rajasekhar Reddy's regime issued a GO about constructing houses for poor people. He had then mentioned that there was no land bank in the Hyderabad core area. He also made it clear that the houses for poor will be constructed in areas surrounding Hyderabad. Similarly, after formation of Telangana, we are constructing houses in the suburbs of Hyderabad. Our government is not facing any anti-incumbency. People are very happy about welfare schemes promised by Chief Minister K. Chandrashekar Rao.

What about infrastructure and investments in Hyderabad?

International companies like Amazon and Tata, Mahindra, Infosys and other companies have invested thousands of crores in Hyderabad because they have belief in the vision of KCR and KTR. I challenge the Congress and the BJP to show such any such investments in states being ruled by them. Several important corridors, apart from SRDP projects are being implemented in the city to reduce the travelling time for citizens. LB Nagar, Nagole, Madhapur, Gachibowli flyovers and subways have been constructed under our government's rule. Durgam Cheruvu Cable Bridge is the first such bridge in the country.

What is your opinion on the BJP? Its party leaders say they will get a full majority and conquer the mayor’s post.

BJP leaders have failed in Assembly and local body elections the last time. They won four MP seats because of Modi Mania and not their own strength. Dubbaka by-poll result will not impact GHMC elections. People have a good knowledge about political parties. We will see how many seats BJP gets and how their leaders perform in GHMC elections.