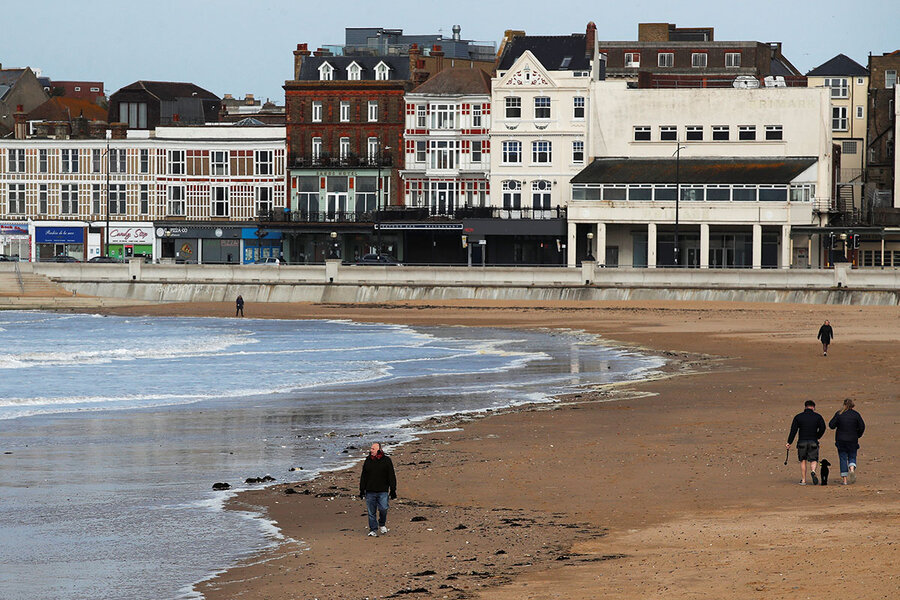 Zoe Artingstall wakes up to the sound of the sea and a view of luscious golden sand. Police sirens and garbage collectors at the crack of dawn no longer disturb a good night’s sleep ever since she swapped London for Margate, a coastal town to the southeast, just weeks before Britain reintroduced new coronavirus restrictions.

“When you’re in London you don’t realize the physical buildup of tension and the frenetic pace of life weighing on you. It’s only when you leave that you realize the toll London life has on your body,” says Ms. Artingstall.

A growing thirst for quality of life, traditionally associated with retirees rather than 20- and 30-somethings, and reassessing life in lockdown accelerated her decision.

The teacher-turned-artist is among a growing number of people under 40 leaving the metropolis of London, and other major British cities, for a slower pace of life. Dissatisfied with the squalid conditions and sky-high rents, they are taking advantage of being unshackled from the geographical requirements of their jobs by the pandemic to establish themselves in places better known for being suburbs, countryside, or old resort towns like Margate. And they are changing the character of their new homes, bringing little pieces of the metropolitan life with them.

Tamsin George left London spontaneously for Malton, near the Northern city of York, as the United Kingdom introduced a national blanket lockdown in late March. Unemployed and exhausted, Ms. George says the country air keeps her “alive” without the “frenetic chaos” of attending London events.

“Lots of young people in London don’t want to be there but feel like they should. They see salaries and the opportunities you have; these are the things that keep people there,” she says. “But you realize when these things are on pause that it’s not worth the money. People have taken lockdown as the push they needed to leave and lay out their priorities in life.”

Renters increasingly look to York, Bristol, and the Home Counties, a southern region with greenery and poorer transport links. Those home-hunting in the capital now look to suburban, fringe areas. According to Rightmove, the U.K.’s biggest property search engine, Chessington, a sleepy suburban town with infrequent trains, is the capital’s new rental hotspot, trumping hip inner-London districts such as Shoreditch and Lewisham, where young professionals in their 20s and 30s typically gravitate after university.

Ms. Artingstall and her partner had been paying just under £1,400 ($1,860) per month for two London rooms in shared accommodation. Now they have a whole apartment with two studios used for artistic work, replete with a view of Margate beach, for just under the same sum.

Living in London’s typically congested areas is exactly what Laurie McAllister did after graduating from university. Disenchanted by work (“slogging my guts out, what’s the point?” as she puts it) and events centered around alcohol and fed up with “booking with friends months in advance just to see them” pushed her to live in Norwich, East England, in her early 20s.

And she wasn’t alone. “Where I moved to East Anglia, there already were young people. It’s a myth that all the young people are in London. Lots never moved, or many moved for university and returned to live – if not in the countryside, in smaller cities.”

Ms. McAllister now runs online motivational courses, yoga lessons, and a blog inspired by her sobriety after leaving London in 2017. Moving to Norwich allowed her to pay the bills and be a freelance yoga instructor, a path “unviable” in London.

“The idea that all the good jobs are in London and the only way to be successful is in London is dated. We’re now all realizing that with Zoom and other technology,” she says.

Employment opportunities attract young renters to Cambridge. With average monthly rents of £1,319 – that’s £681 cheaper than London – software engineers between 18 and 40 years old in particular have moved to be near AstraZeneca and Microsoft offices. Sarah Bush, head of lettings at Cambridge-based property agent Cheffins, has noticed a shift in the past six months, with renters “seeing space is important, gearing themselves up to work from home.”

“The younger generation still want to be near to work. If they’ve got to go into the office, there’s a reluctance to go into public transport and Cambridge is walkable,” she says.

The growing influx of ex-Londoners has been so large in the past decade that locals give them a specific name.

“They call us DFLs, or ‘down from London,’” says Matt Mapleston. Inspired by London’s tech scene, he’s opened a workspace for local freelancers inside a converted warehouse since moving to Margate in 2017. It’s part of a tradition of “London ideas” brought by DFLs since Margate’s Turner Contemporary art gallery opened by the seafront a decade ago, creating a thriving art scene in an area that older locals say used to be a no-go zone for outsiders.

The equivalent of three people per day relocate from London to Thanet, the area comprising Margate and Ramsgate. In 2017, some 1,830 Londoners relocated to Thanet, while 26,380 people overall moved from London to Kent, the county in which Thanet lies.

Ramsgate has quickly grown into a celebrated music and festival venue. Margate, dubbed “Shoreditch-by-Sea,” saw an 84% increase in creative businesses last year. Locals are swept along by the regeneration spirit aided by ex-Londoners, but are also wary of the long-term consequences of an area equally split between DFLs and longer-term locals.

“Gentrification is the biggest topic on local minds,” says Ms. Pickles. “The majority of people who’ve lived here since being a child can’t buy a property here.”

“The primary positives of gentrification here is that it becomes attractive to outsiders for investment,” says Filipe Gomes, a local radio presenter hoping to reach underrepresented voices in the area. “We have to ask ourselves, how inclusive is that? Galleries look great on the seafront, but the young lad that’s grown up here, how much does he feel a part of that?”

Ex-Londoners are well aware of the Catch-22 they bring. “It’s a well-worn road when creatives find a new area. They start making it a different place to live and then others follow to live in the place made more desirable,” says Mr. Mapleston.

But Lilla Allen, editor for local magazine Ramsgate Recorder and a self-described DFL, says that the newcomers do value the locals and are building bridges with them. “Community is overused but it does exist and it’s healthy here between different people, young and old,” she says. “Small towns feel the impact immediately of new ideas, and there’s real pride around town.”