South Africa was as surprised as the rest of the world at the popular uprisings in the United States in 2020, even though it had seen the 2015 student protests in support of decolonising South African education on various university campuses.

These highlighted the fact that despite two decades of democracy, systemic racism and exclusions were still rampant in education and every other sector of South African life. Rallying behind the call of #RhodesMustFall, they demanded the taking down of the statue of the arch-imperialist at the University of Cape, among whose vices was the formal introduction of the colour-bar into South African sport in 1894. The events in the northern summer of 2020 mirrored in many ways these earlier South African student protests, the impact of which have been particularly powerful because of the large-scale economic marginalisation of most black South Africans and the perceived failure of the democratic government to redress the situation. Rhodes’s statue was duly removed and South African students at Oxford University subsequently demanded the same treatment for a Rhodes statue there, too.

When Black Lives Matter generated US and British acts of solidarity in July 2020, it had an immediate, dramatic impact in sport in South Africa. Before a special post-lockdown match to mark 102 years since the birth of Nelson Mandela, Lungi Ngidi, voted South Africa’s best one-day and T20 player in the previous season, was rolled out for the obligatory press conference. Asked what he thought about Black Lives Matter the young fast-bowler commented: “It is definitely something we would be addressing as a team. And if we’re not, it’s obviously something that I would bring up. It’s something that we need to take seriously, like the rest of the world is doing.” 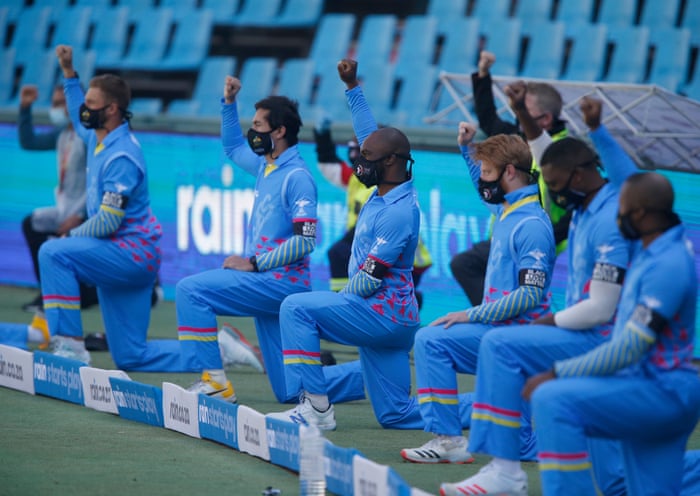 Ngidi’s calm response to a routine question ruffled the feathers of a cohort of former white Test players. Tapping into language codes that said more than words, they took issue with him on social media, with Rudi Steyn opening the batting. He was against racism, but if the Proteas stood for BLM “while ignoring the way white farmers are daily being ‘slaughtered’ like animals, they have lost my vote”. Boeta Dippenaar said BLM was nothing more than a leftist political movement, started by Marxists whose aim was to break down family life and “if you want me to stand shoulder to shoulder with you Lungi, then stand shoulder to shoulder with me with regard to farm attacks”. He also suggested Ngidi should do some reading: Milton Friedman and others.

Pat Symcox, known as a bullish anti-transformation and change voice, charged in: “What nonsense is this. He must take his own stand if he wishes. Stop trying to get the Proteas involved in his belief. Besides the fact that right now Cricket South Africa should be closed down. A proper dog-and-pony show with cricket being dragged through the mud daily. Buy popcorn and watch. Now when Ngidi has his next meal perhaps he would rather consider supporting the farmers of South Africa who are under pressure right now. A cause worth supporting.”

These responses drew straight from alt-right perspectives in the US and South Africa. The right-wing lobby group AfriForum had developed close relations with the US alt-right, who took up its narrative that the democratic government was callous to a genocide being levelled against white farmers in South Africa. The commentator Ashwin Desai described the idea that the movement was part of an international left conspiracy sucking in LeBron James, Lewis Hamilton, the Premier League players who took the knee and the South African cricketers as “Monty Pythonesque” thinking, noting also that Symcox was consistent with “his call that his [white] contemporaries should be running South African cricket”. The former all-rounder Brian McMillan then wheeled in to bowl with hardly a thought, dismissing the whole issue as “a load of crap”, making one wonder if he could have witnessed the killing of George Floyd. 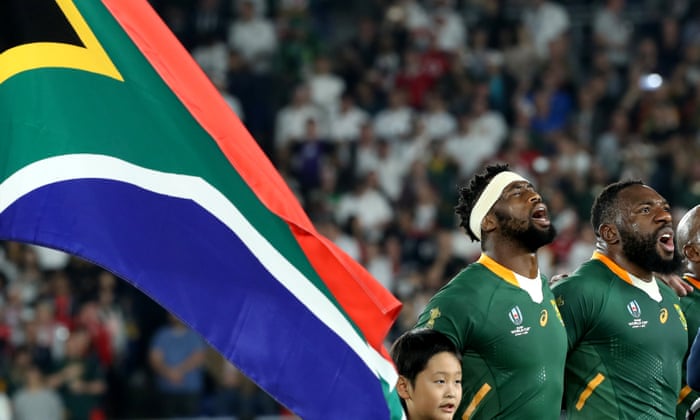 These comments invited outrage and the debate soon reached tinderbox proportions on social media. Cricketers, led by South Africa’s first black captain, Ashwell Prince, were among those to respond. He said the system in cricket and the country was broken and that it was time for honesty and for black players to speak up. He and former teammates started conferring about a collective statement on the matter. Soon 31 ex-Proteas and five senior coaches had signed up, supported next day by a powerful statement from Hashim Amla, South Africa’s highest-scorer in Test matches, with 311 not out. Top of the list was Makhaya Ntini, the first black African player to represent South Africa, who played 100 Tests in a stellar career, which saw him take the fourth-highest number of wickets for his country. Ngidi’s fellow players commended him for his actions and came out “strongly in support in support of #BLM”. They noted the views by Symcox and others and said they needed to be challenged:

We are not surprised at their comments. Given South Africa’s well-known past, black cricketers have borne the brunt of subtle and overt racist behaviour for many years, including from some colleagues. Consequently, there is a need to understand how white privilege feeds into the perpetuation of these old attitudes and assumptions. Our attitude, mistakenly, we now believe, has always been to say: ‘These are teething problems, and that these will be resolved if we are patient.’ But after almost three decades of cricket unity, the views expressed from one side of the racial divide are still very much part of our lives, and we now believe: ‘Teething problems cannot be allowed to continue for this long.’

“All the signatories to the release stated that they have stories to tell about the racism they have had to endure as they strove to get to the top of their sporting careers. Sadly, these have often been at the hands of teammates.”

They asked for Cricket South Africa’s support in helping to bring these stories into the open, also for that of their colleagues in women’s cricket.

Their statement observed that transformation from apartheid was forever given the blame for problems and poor performances, but when South Africa won the 2019 Rugby World Cup in Japan: “We cannot recall anyone suggesting that the victory was due to transformation.”

This after rugby was said to have been “dead – killed by transformation” just two years earlier.

Can there be equal treatment, please, the group asked, underlining that they had represented South Africa on merit: “Far too many white South Africans cannot accept that black cricketers have proved, time without end, that they are good enough to play at the highest level.”

Underlining Robin Petersen’s observation that this action was about “leadership, strategy, non-racialism and love for our country”, the players made a point of inviting “our fellow white cricketers to join in this move to defend human dignity” and said:

We live in a beautiful, diverse country, but where the playing fields are still far from level, and the transformation of cricket and people’s lives should be of paramount importance. We are determined that future generations should not have to experience the pain we have had to endure, and that no South African cricketer should be discriminated against in the future. Racism is a global problem and, as the great Michael Holding explained, we can no longer just keep on laughing, grimacing and moving on.

Calling on the name of Mandela in the week of his anniversary, the players stressed finally that lingering racism in cricket “can be tackled once and for all – for the sake of every child and every cricketer in South Africa’ if there were ‘honesty and sincerity all-round’”.

The cricketers now started talking about their personal experiences. Ntini explained how he was dropped after his 100th Test – no series to bid farewell to the fans at each home ground as usually happened. He lost his contract within a month, “from A+ to nothing”. 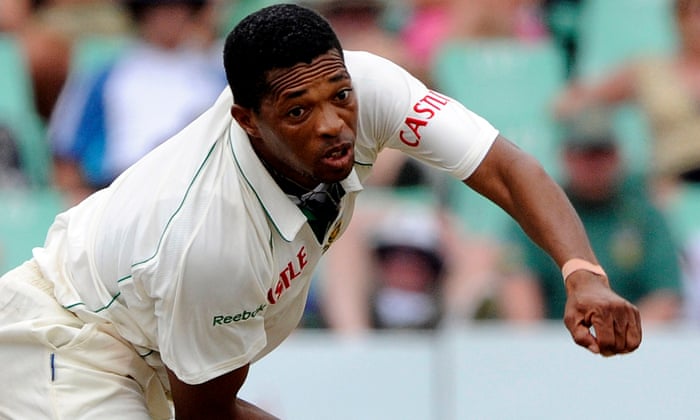 But nothing was as powerful as when he spoke about being “forever lonely” during the time he played for South Africa: seldom would a teammate knock on his hotel room door to chill or check in on how he was; there would be dinner-table chat about where people were going out without an invite to come along; or he would just be left to sit alone. He mentioned it was this feeling of isolation that explained his legendary running between hotel and stadium during international matches – “the best weapon of my life”; getting air in his lungs and “running away” from the paradoxical loneliness of the team bus.

Cricket South Africa and its provincial affiliates, as well as the media and civil society, rushed to support the former players and their call for action. When the first match after the lockdown took place on 18 July 2020, a charity event to celebrate Mandela’s birth and raise funds for Covid-19 relief, all 36 players and the few officials in an otherwise empty stadium wore BLM armbands and took the knee together.

This breaking of the silence by top players was a catalyst psychologically, shifting South African cricket to the next phase of substantive change. One of those moments where everything changes. The players, acting in solidarity, broke the silence to speak about how the system and old attitudes held black people back. The self-assumed authority and unspoken power that Symcox enjoyed until that moment was gone. A new narrative was replacing the old.

Next day, the newspapers announced that 49 of the top black rugby coaches, including six who had played for the Springboks, were backing the cricketers and BLM. They pointed out the facts: “100% exclusion” of black coaches at the strategic national and professional rugby levels, and the same “100% exclusion” for CEOs and high performance managers. Thirty-nine black sportswomen followed next day. 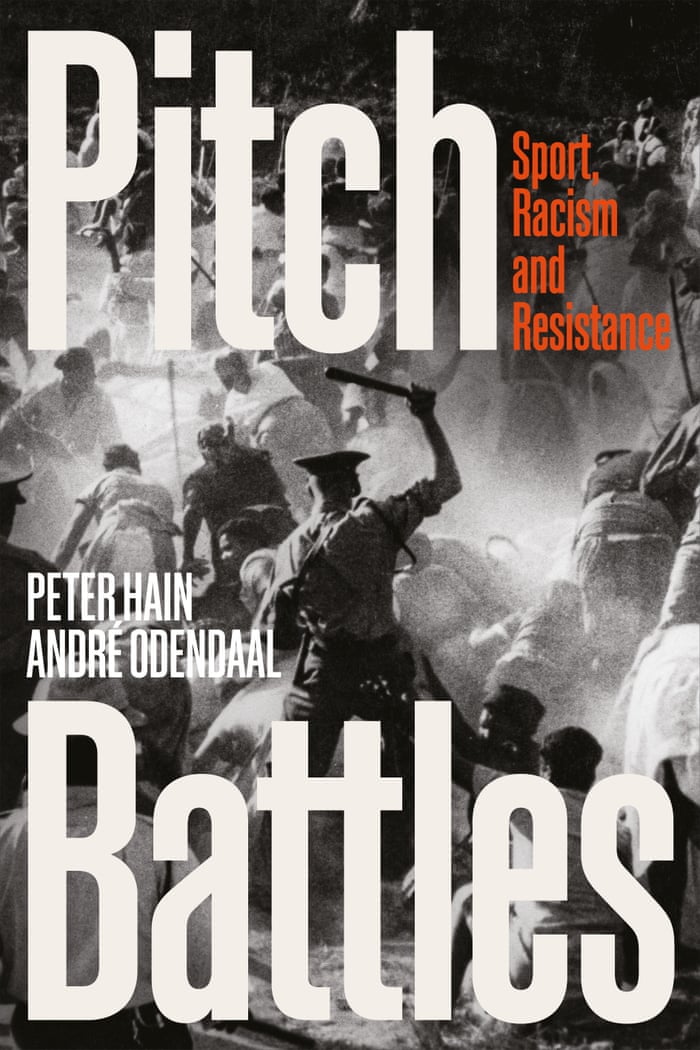 They were joined by the World Cup-winning captain, Siya Kolisi, after his fans questioned his silence. In an Instagram post, he spoke of the language and cultural alienation he felt growing up, and how he was made to “feel grateful” rather than valued on making the Springbok team in 2013. He said that his silence was now over, even if it meant losing his place in the team.

Thus, the death of a US citizen at the hands of a policeman in Minneapolis reverberated powerfully across the globe to the sports fields of South Africa. There is no gainsaying that top of the agenda in South African sport now is that black lives matter.

Pitch Battles by Peter Hain and André Odendaal is published by Rowman & Littlefield International, £25. To order a copy for £21.75 go to guardianbookshop.com. Delivery charges may apply