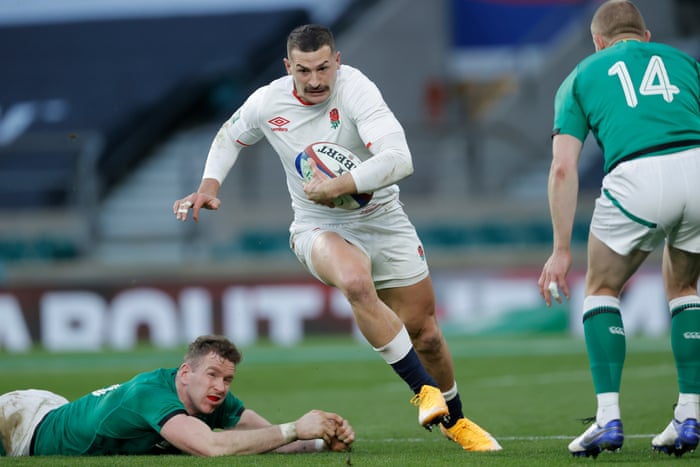 Still no thunderous noise from the empty stands, nor a huge amount to lift their television audience from their armchairs, but England quietly continue to prove seriously hard to beat. At no stage did they look in danger of losing to a largely pedestrian Irish side and two first-half tries inside five minutes from Jonny May have all but guaranteed they will be involved the final of the Autumn Nations Cup in a fortnight’s time.

For the second Saturday in a row their opponents were confounded by a bristling white defensive wall, with the match stats neatly summarising the contest. England made 246 tackles – missing nine – compared with their opponents’ tally of 73, making Ireland’s superior territory and possession percentages largely redundant. Never mind the latest government directives, this was up there with the tightest lockdowns yet seen in south-west London.

The losing head coach, Andy Farrell, and his attack coach, Mike Catt, have known a few good days on this patch of grass, but this was not one of them. England have now chalked up four successive wins in this fixture and Farrell’s attempts at freshening up the squad he inherited from Joe Schmidt have yet to reap any significant reward. Until Jacob Stockdale’s 74th-minute try, it was threatening to be the second time in 43 years Ireland have been left pointless against England.

May, complete with his Movember ‘tache, was also a constant irritation to the men in green. The wing registered his first tries in an England jersey since the opening weekend of the Six Nations in Paris in February and has now scored 31 tries for England, putting him equal-second behind Rory Underwood on England’s all-time list.

The Leicester flyer scored a remarkable 49 tries in 85 Tests, while this was May’s 59th cap. Underwood’s long-legged successor turned 30 last April, but still looks impressively fit and full of running: there is more in him and the same could be said of England as they grind through the gears en route to loftier prizes. If Ireland did not already know about the quality of the Maro Itoje – deservedly voted man of the match – Tom Curry and Sam Underhill, they do now.

At times it was like watching a scavenger hunt when only one of the competitors has found the correct instructions. England are still not creating a huge amount, but they are making life increasingly awkward for all comers. Wales will not be greatly looking forward to facing them at Parc y Scarlets next Saturday.

If nothing else England are particularly ruthless when it comes to preying on mistakes. The game’s opening try certainly had echoes of Ireland’s unsuccessful Six Nations visit here last year. In this case Hugo Keenan was the full-back at fault, a misjudgment of Owen Farrell’s cross-kick allowing the athletic May to claim the high ball above him and touch down.

Even better was to follow for the wing after England found themselves with some turnover ball round their own 22-metre line. The Ireland centre Chris Farrell seemed to have his opponent covered, but May had other ideas, nifty footwork and a well-judged chip ahead setting up a foot race the Gloucester man was always a decent bet to win. 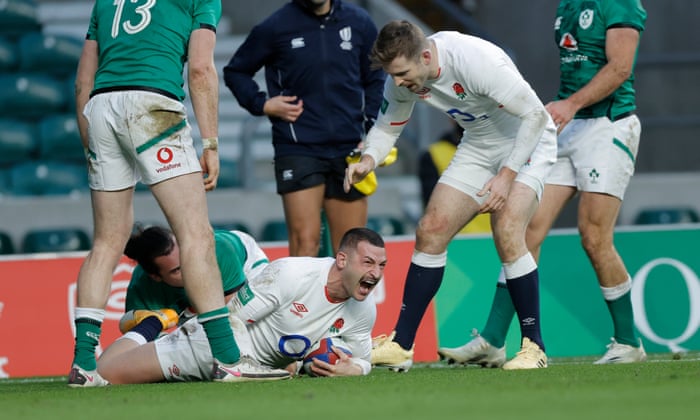 Suddenly, despite a stuttering first quarter of an hour, it was 12-0 with England in total control. Even when Ireland had a glimmer of an opening there was no way through, Keith Earls being hauled down by the ever-present May.

There was another classic defensive snapshot shortly after Jamie George was pinged for a crooked throw, presenting Ireland with possession and a decent field position. All too soon, though, Tom Curry was bent over the tackle area, immovable even when the Ireland captain, James Ryan, tried to blast him away with all the force he could muster. Penalty England, resilient point proved.

Very little Ireland tried was working. Ryan resorted to tugging at Itoje’s arm in the lineout but succeeded only in giving away another penalty.

England could have had a third try just before half-time when Jamison Gibson-Park was scragged by Underhill close to his own line and the flanker went on to strip the ball and touch it down. It was correctly disallowed because Underhill, as the tackler, was technically required to regain his footing before playing the ball, but it was another example of the all-action contribution from the back-rower. Sam Simmonds, brilliant for Exeter across the road at the Stoop the previous evening, will have to bide his time.

A 46th-minute Owen Farrell penalty, after Quinn Roux had been penalised for a fractionally high challenge, pushed England further ahead and Ireland spent much of the game heading down more cul-de-sacs than a Tesco home delivery driver.

Chris Farrell was brilliantly held up by Henry Slade when a try looked almost certain and Stockdale’s try came too late to make a material difference.

Of the various Farrells involved, Owen was comfortably the most satisfied at the final whistle.