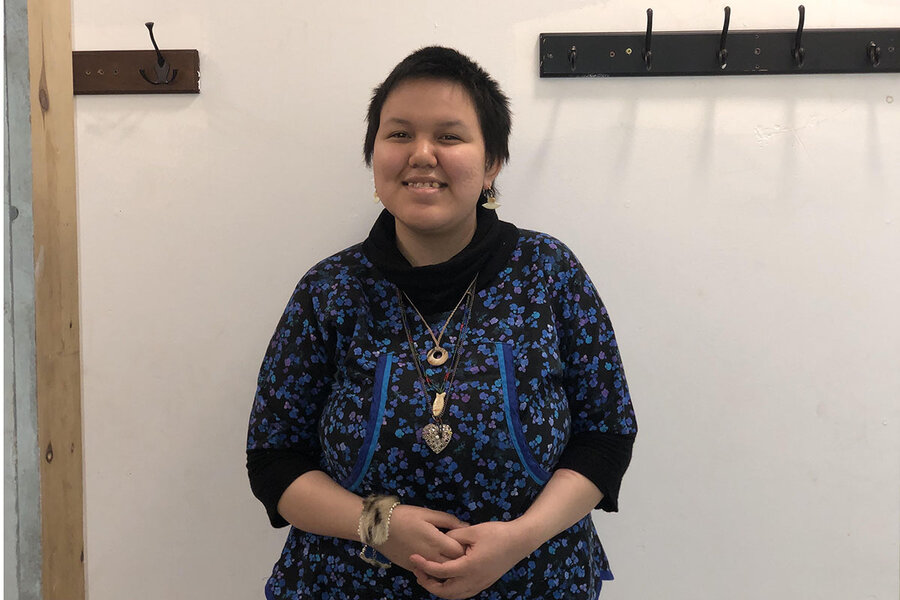 This fall’s drop in freshman enrollment is likely to have long-term consequences for students, colleges, and the economy at large. Students who postpone enrollment are far less likely to graduate from college than those who enroll immediately after high school. And without a degree, they’re more likely to get stuck in low- and middle-wage jobs.

So colleges and access groups are scrambling to get students back on track. They’re reaching out to applicants asking why they didn’t enroll and reassuring parents that their campuses are safe. Some are offering discounted or free tuition and other incentives.

In Point Hope, Alaska, high school counselor Cathy Williams is urging Ms. Oviok and other students who sat out the fall semester to enroll at the tribal college, Iḷisaġvik College, this spring.

“I’m trying to build a bridge to the community college,” she says. “Even a certificate will help you get employment.”

Point Hope is located near the tip of a triangular spit of land that juts out into the Chukchi Sea. It is reachable only by sea or air. The local economy revolves around subsistence hunting, fishing, and whaling.

The isolation and self-reliance of Point Hope have insulated its 700-some residents from the health and economic impacts of the pandemic. But the town’s remoteness has also made the pivot to online courses and services difficult for its aspiring college students. Though high-speed internet is available in Point Hope, it’s expensive, and most families can’t afford it, Ms. Williams says.

Without high-speed internet, students couldn’t participate in the virtual tours and chats that replaced in-person visits to college campuses last spring. They also couldn’t commit to online classes if their college opted for remote-only instruction.

It’s not just Point Hope that is seeing the effects of the digital divide on students’ college plans. Nationwide, more than a quarter of Native American students attending a tribal college lack reliable internet access at home, according to a survey by the American Indian College Fund. For many of them, access is not just a matter of cost, but availability. In vast swaths of rural America, “there are literally no lines,” says Carmen Lopez, executive director of College Horizons, a New Mexico nonprofit that helps Native students enroll and succeed in college.

At the Institute of American Indian Arts, in Santa Fe, freshman enrollment fell by a third this fall, a drop that admissions director Mary Silentwalker attributed to the school’s decision to offer most courses online.

“We had a good group accepted, and they just started falling by the wayside,” she says.

More than three-quarters of the nation’s tribal colleges have lost first-time students this fall, with an average reported decrease of nearly 75%, according to a survey by the American Indian Higher Education Consortium (AIHEC).

But a handful of institutions appear to be benefiting from the shift to online learning. Tohono O’odham Community College, in Arizona, grew its freshman class by almost 150%, in part by adding students from Phoenix and other parts of the state who live too far away to commute. In a typical year, the college serves students from 10 tribes; this year, it has students from 45, says Paul Robertson, president of Tohono O’odham.

“Pre-COVID, tribal colleges were serving students who lived within the geographic area,” says Carrie Billy, president and CEO of AIHEC. “Now, because they’re offering online, students from anywhere can enroll.”

The dramatic decline in freshman enrollment isn’t due to technology challenges alone. In many communities of color, high unemployment rates are forcing young people to put off college to work to support their families.

Raven Culbertson, 18, a member of the Spirit Lake Tribe in North Dakota, is among them. When the pandemic hit, her grandfather stopped working because underlying health issues put him at risk of severe illness. Ms. Culbertson thought she could balance online classes at the local tribal college with a full-time job at Walmart, but she was quickly overwhelmed. She quit school after just three weeks.

“I know school is important and stuff, but I needed a job because my family was running low on food,” she says. “I was really trying to juggle everything, and I couldn’t.”

Even before the pandemic, roughly two-thirds of tribal college students reported experiencing food or housing insecurity, according to a recent survey by the Hope Center for College, Community, and Justice.

With so many of their students struggling financially, several tribal colleges offered free or reduced tuition this fall. Some of these colleges, including Tohono O’odham, saw their enrollment increase.

Others, like the Navajo Nation’s Diné College, which offered a 50% tuition discount, lost freshmen anyway. Monty Roessel, Diné’s president, attributes the 42% drop, in part, to transportation and child care issues. With the reservation’s bus system down, some students have no way to get to campus for those classes that remain in-person. Others must stay home to supervise siblings or their own children while schools are closed.

To entice them to enroll in the spring, Diné plans to offer evening classes at high schools to avoid long commutes to the Diné campus. The college is also extending its 50% discount.

But as the pandemic drags on, hope for a 2021 rebound in freshman numbers nationwide is fading. Compared to this time last year, fewer high school seniors have filled out the Free Application for Federal Student Aid – a key signal of their intent to enroll and a leading indicator of enrollment. As of early November, FAFSA completions were down 20%  at schools with high concentrations of students of color, according to the National College Attainment Network.

In Point Hope, Alaska, where the polar night is about to descend, Ms. Oviok is planning to take her high school counselor’s advice and enroll in the tribal college in the spring. She’s a little disappointed not to be off to college in Fairbanks, but she doesn’t regret her decision.

“I like my culture, the whaling festivities, how close our community is,” she says. “In the city, you don’t know anyone.”

Editor’s note: This story has been updated to correct the name of the National College Attainment Network. As a public service, we have removed our paywall for all pandemic-related stories.