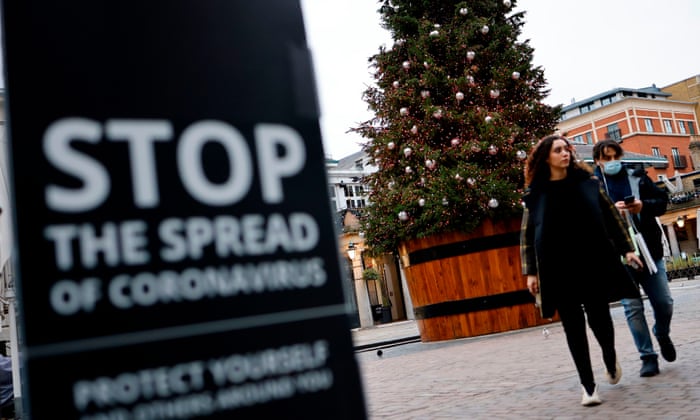 Boris Johnson is facing a significant challenge to his plan to replace the current lockdown in England with a stricter three-tiered system of Covid restrictions, with 70 Conservative MPs saying they would not back the new regime without first seeing a cost-benefit analysis.

In a letter to the prime minister illustrating the scale of unrest among Tory ranks, MPs from the newly formed Covid Recovery Group said the government must prove the new restrictions “will save more lives than they cost”.

On Monday, Johnson is expected to tell MPs what will replace the lockdown in England when it comes to an end on 2 December, including how families can mix with different households at Christmas.

Cabinet Office minister Michael Gove met leaders of the devolved administrations over the weekend to agree “a shared objective of facilitating some limited additional household bubbling for a small number of days”. But the public will be “advised to remain cautious” and told that “wherever possible people should avoid travelling and minimise social contact”, a statement from his department said.

As part of the Covid winter plan, more areas are expected to be placed into the highest tiers of measures in an attempt to keep the virus under control. Some tiers will be strengthened to safeguard the progress made during the lockdown, although No 10 has not yet detailed how these measures will change.

It is understood the 10pm forced closing time for pubs and restaurants will be extended but that people will given an extra hour to finish the drinks and food they have already purchased.

Asked about this on BBC1’s Andrew Marr Show on Sunday, the chancellor, Rishi Sunak, said this was “definitely something that we’re looking at”. He said: “One of the things that we’ve been able to do as we’ve learned is get data, see what works and see where we can improve things.”

The cabinet is expected to discuss and finalise the plan on Sunday before Johnson announces it to parliament.

Before this, the letter from the 70 MPs, also signed by 14 Conservative peers, told Johnson that a tiered system “infringes deeply upon people’s lives with huge health and economic costs”.

They wrote: “We cannot support this approach further unless the government demonstrates the restrictions proposed for after 2 December will have an impact on slowing the transmission of Covid, and will save more lives than they cost.

“To this end, government must publish a full cost-benefit analysis of the proposed restrictions on a regional basis so that MPs can assess responsibly the non-Covid health impact of restrictions, as well as the undoubted impact on livelihoods.”

The demand leaves Johnson with the uncomfortable prospect of having to rely on Labour votes when the plan is voted on by MPs next week.

Asked about the idea of a cost-benefit analysis, Sunak said this was unlikely. “It’s very hard to be precise in estimating the particular impact of a one-week restriction,” he told Sky’s Sophy Ridge on Sunday.

“What you will see next week when we have the spending review, alongside that will be a set of forecasts from the Office for Budget Responsibility … which will show the enormous strain and stress our economy is experiencing, the job losses that you mention, the forecasts of what will happen, and it’s right that we consider those in the round as we consider the best way to fight the virus.”

Ministers have already signalled that some restrictions are expected to remain in place during the festive period. The government’s Scientific Advisory Group for Emergencies (Sage) is due to publish research on Monday suggesting that measures in the previous tiered system were not strong enough.

Calum Semple, a professor of child health and outbreak medicine at Liverpool University, told the Ridge show that there was some good news on the rate of infection and the number of cases coming down.

He said: “Nationally we are seeing cases in the community fall and in those areas that went into tier 3 before lockdown we are already seeing the tide turning with the number of hospital admissions and we will shortly see the deaths reduce as well.”

Reports have suggested that under the plan, several families may be allowed to join one “bubble” in order to see loved ones over the Christmas period between 22 and 28 December.

On Thursday, the government will set out which tier each area will be placed into, with MPs due to vote on whether to approve the new system in the days before it comes into force on 2 December.

It is optimistic that restrictions could be eased gradually in the run-up to spring if Covid vaccines are approved by regulators, allowing for the rollout to begin next month before a wider vaccination programme begins in the new year.

The plans emerged as the government announced a further 341 people had died within 28 days of testing positive for Covid-19 as of Saturday, bringing the UK death tally to 54,626.