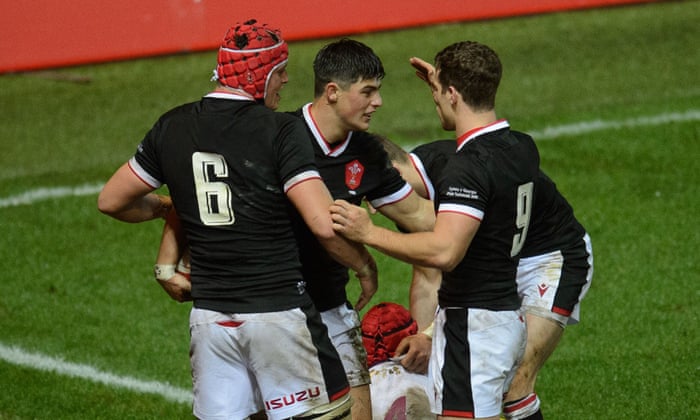 Wales ended their losing run, but they could hardly fail to against a team that were armed with nothing more than heart. Georgia posed no attacking threat – unlike Japan, who would have been the opponents but for the pandemic – and they struggled to restrain a much-changed team which made up for their inexperience with drive and a hint of devil.

The conditions were made for a roof. A steady drizzle had fallen all day, accompanied by a swirling wind, and players struggled to hold their footing from the off. Wales’s first attack ended when Seb Davies lost the ball in contact, the first of many spillages, but a side that had lost their previous six Tests and could not afford the ignominy of a seventh took the game to Georgia from the start.

The Gloucester wing Louis Rees-Zammit, making his first Test start, scored the opening try of the night having been held up on the line minutes earlier and also provided its best moment when he beat six defenders on a weaving run from his 22 in the second half.

The debutant James Botham added ballast at the breakdown, strong over the ball and quick to latch on to ball carriers, and the fly-half Callum Sheedy showed the assurance of someone who owned many more than two international caps.

Wales were concerned that his initiation would take time because he plays for a club that prefer to keep possession rather than kick it, but on a night when the boot appeared to be a safer option than the hands he proved adaptable and it was his long pass, after Nick Tompkins attacked the line from a scrum, that created the space for Rees-Zammit’s opener. 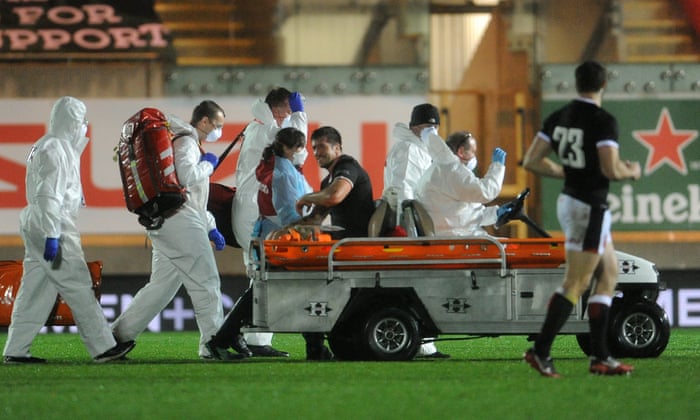 The try came after 26 minutes when Wales were leading through Sheedy’s early 45-metre penalty and dominating in terms of territory and possession, not least because they were awarded the first seven penalties of the match as Georgia were too quick to go off their feet after a tackle and failed to scrummage straight.

Sheedy’s cross-kick in Georgia’s 22 caused panic in the defence but there were enough bodies to hold up Rees-Zammit, Tompkins was stopped close to the line three times and Johnny Williams, on his debut, provided a midfield target who took some subduing. Wales showed more variety, wit and willingness than they had in their three previous matches after lockdown, but then again they were up against a team that had no means to win the game.

The conditions should have suited Georgia, with the majority of their pack playing for clubs in the Top 14, but their scrum was invariably illegal and their driving maul lacked impact. Most of their backs play in a domestic league, which showed in their lack of attacking ideas and a kicking game that was strikingly ineffective. All they had was desire and neither the rain nor purposeful opponents dampened that. They were never far away in terms of points, Sheedy’s penalty on 50 minutes making it 13-0, and it was only late on that Wales scored their second try. But Georgia were nowhere near in terms of opportunity.

The heat on Wayne Pivac will be reduced but, with England here on Saturday, the relief may be temporary. The Wales head coach has to decide how many of the experienced players who were ineffective against Scotland and Ireland to recall against the groups leaders and Six Nations champions. If a game that in the second half fell victim to the elements showed anything, it is that he needs to invest in the future, not the past.

The debate in Wales in recent weeks has been about Pivac’s future, but attention needs to be paid to the four regions that supply the national side’s players.

Pivac’s main concern was second-half injuries to Liam Williams and Justin Tipuric, the latter after landing on his head following Rees-Zammit’s counterattack and a passing blow from Beka Saghinadze that earned the flanker a yellow card. Rhys Webb’s late try after Johnny Williams’s carry and Rees-Zammit’s inside pass concluded a muted evening. Wales still do not have enough to shout about.

“Pleased a team with 13 changes got a result in tricky conditions,” said Pivac, before looking ahead to Wales’s next game. “England are a formidable team and will be a challenge. I thought the yellow card warranted more, a nasty forearm to the face.”