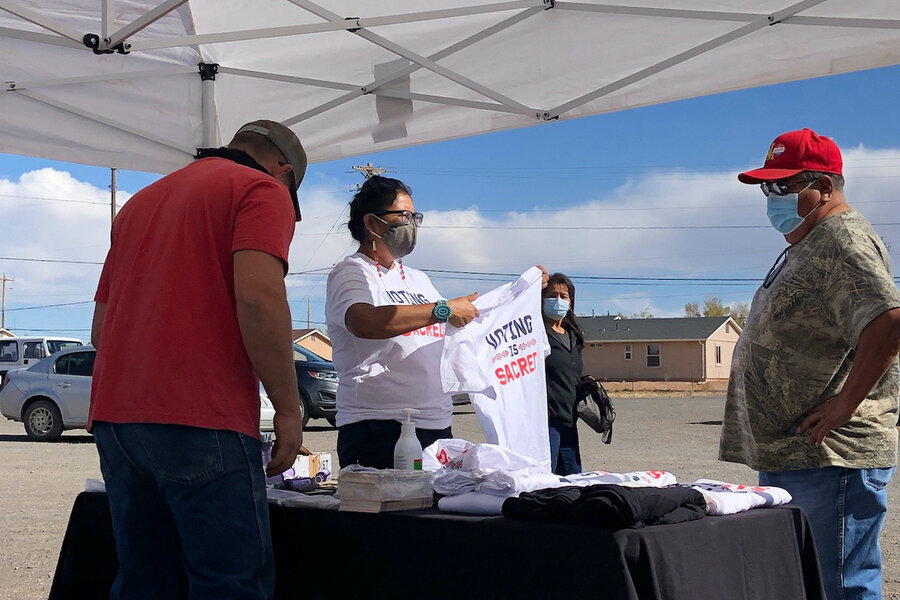 Voting rights advocates had long argued that if Native Americans and other minority groups were mobilized, they could be decisive in a tight race.

This year proved that.

Voter turnout on swaths of tribal land in Arizona surged compared with the 2016 presidential election, helping Joe Biden to victory in a state that hadn’t supported a Democrat in a White House contest since 1996. Native Americans were among the difference-makers who swung the race to Mr. Biden in Arizona.

“It truly takes a village,” said Clara Pratte, a political operative and Navajo woman who led national tribal engagements for the Biden campaign. “Could it have been done without a tribal vote? No.”

That show of force is now translating into leverage for Native Americans seeking more representation in top levels of the federal government.

Mr. Biden is under pressure to appoint at least one Native American to his Cabinet. Among the contenders to oversee the Interior Department, which works with tribes, are New Mexico Rep. Deb Haaland, a member of the Laguna Pueblo, and Kevin Washburn, a former head of the Bureau of Indian Affairs who is a member of the Chickasaw Nation of Oklahoma. Retiring Sen. Tom Udall of New Mexico, vice chairman of the Senate Indian Affairs Committee, also is the list.

While it’s difficult to determine exactly how many Native Americans voted because many live off reservations, a look at the turnout in key areas reveals a sharp rise in engagement.

Voters in precincts on the Navajo and Hopi reservations in northeastern Arizona cast nearly 60,000 ballots in the Nov. 3 election, compared with just under 42,500 in 2016, according to an Associated Press analysis of election data. Mr. Biden won Arizona by about 10,500 votes, according to unofficial results.

Turnout in two of the larger precincts on the reservations, for example, rose by 12% and 13% – and Mr. Biden won there handily – compared with a 4% increase among all Arizona voters.

Twice as many voters cast ballots in 2020 than in 2016 on the much smaller Havasupai reservation deep in a gorge off the Grand Canyon, overwhelmingly in support of Mr. Biden. More people from the Hualapai reservation also voted this year, with Mr. Biden outpacing Mr. Trump by a nearly 5-1 ratio.

Native voters say they were motivated by many of the same things as other voters.

“I was so disgusted with Trump,” said Tommy Suetopka, a Hopi tribal member who lives in Tuba City. “Anybody who would want to run [against him] was going to get my vote.”

Willis Daychild, who is Hualapai and lives in Phoenix, was critical of Mr. Trump’s relationship with international leaders, his handling of the coronavirus pandemic, and his immigration and health care policies.

Mr. Daychild said he saw Mr. Biden as a more decent candidate. “He might not be perfect, yet he has a foundation,” said the budget analyst.

That anti-Trump sentiment was translated into votes by a widespread Democratic turnout effort.

Ms. Pratte, whose childhood home in Lupton on the Navajo Nation didn’t always have electricity or running water, reached out before the election to the leadership of all 22 tribes in Arizona, a move that she said is indicative of the relationship federally recognized tribes have with the United States as sovereign nations.

The Biden campaign made of point of not treating Native voters as a monolith, Ms. Pratte said, and targeted specific groups, including Native women, youth, veterans, and members of the LGBTQ+ community. Closer to Election Day, the campaign pushed tribal communities to voting sites with events that encouraged safe socialization – riding horses to the polls, driving in caravans, and a parade to the polls with dancers on the street.

President Donald Trump also made a play for Native American voters. A slate of Republican Native Americans well-known in Arizona political circles joined in rallies for Mr. Trump, drawing comparisons between rural values and those in tribal communities.

Republican groups put up billboards across the Navajo Nation that said “Navajos for Trump,” ran advertisements in newspapers and denounced what they misleadingly described as Mr. Biden’s “socialist” agenda in a video filmed on the reservation.

Navajo Nation Vice President Myron Lizer was among Mr. Trump’s biggest supporters in Indian Country. Already, he said he has reached out to the Republican Party, saying it needs to start building relationships with Indian Country before the 2022 election and bring people on board who understand tribal communities.

“We need that strong, strong voice, someone who speaks Navajo eloquently, knows the tradition, knows the language, and they are out there,” he said. “I’m kind of remorseful that maybe I didn’t do as much as I could have done.”

Native American voting rights advocates knew they had to campaign differently this year because of the pandemic. Instead of the usual door-knocking, they did phone-banking, mass texting, and radio advertisements in Navajo, English, and Apache, creating family trees to reach out to broader groups of people.

Carol Davis, who is Navajo, received at least four handwritten postcards at her house asking if anyone needed a ride to the polls and ensuring she knew where to vote. She also was part of a group helping to boost voting among Native Americans.

She and others set up an information table at the junction of rural roads in northeastern Arizona and answered questions, mostly from Navajo speakers.

“In all these areas, there’s always been some form of voter suppression, even if it’s not outright voter suppression, and it’s always created this idea that ‘I’m not going to even bother to vote,’” said Ms. Davis, executive director of the environmental advocacy group Diné CARE. “There’s been a lot of missed voters because of that.”

The Native Vote Election Protection Project sent 60 observers to polling sites in Arizona on or around tribal land on Election Day and set up a hotline for voters to call in with any questions about voting or problems at polling sites.

Patty Ferguson-Bohnee, who oversees the project, said voters weren’t always issued provisional ballots when they should have been. People from the same household weren’t allowed to vote in the same place, an issued tied to the widespread use of post office boxes on reservations.

Across the country, Arizona, Alaska, Oklahoma, New Mexico, South Dakota, and Montana have the highest percentages of Native Americans eligible to vote, according to the National Congress of American Indians. In Arizona, that was about 310,000 potential presidential votes.

“People need to start paying attention to not only Navajo votes but across the board nationally, Native votes,” Ms. Davis said. “Even though we’re less than 2% of the population, we can come out in full force.”