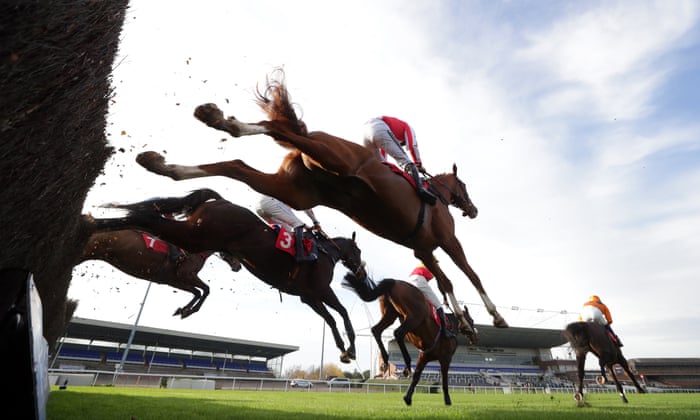 Arsonists have burned down the third-last fence at Kempton Park leaving groundstaff at the Surrey track to rebuild it for the King George VI Chase on Boxing Day. The crime was committed shortly before jump racing was due to resume for the winter season at the track near Hampton Court.

“Someone burned it to the ground,” said Barney Clifford, Kempton’s clerk of the course. “It was a Sunday night, around midnight. We have 24-hour security but somehow they managed to get in.

“It’s a real inconvenience, but that’s life. We’ve already put part of the frame in and the birch has now arrived. My staff are kept busy because we have so many racedays here but we’ll get to it and hopefully it’ll be built for Boxing Day.”

The third-last is the first fence jumped in Kempton’s home straight and has played a memorable part in many King Georges over the years. Notably, it was the very last fence tackled by Desert Orchid, who fell there in the 1991 race and was subsequently retired.

A spokesman for the Jockey Club, which owns Kempton, said: “The third-last fence at the course suffered an act of vandalism at the beginning of October. This was reported to the police.” Surrey police did not respond to a request for comment on Sunday.

Kempton has staged two low-profile racedays on its jumps course since the incident, at which false rails have been in place to guide runners around the spot where the fence should be. The reason for that has now come to light, with Shishkin due to make his chasing debut at the track on Monday.

Winner of the Supreme Novice Hurdle at the last Cheltenham Festival, Shishkin is already a short-priced favourite at odds of 11-4 for the Arkle Trophy back at Cheltenham next March, even though he has yet to jump a fence in public. His first attempt at chasing will be required viewing for fans of the sport and it has been widely noted that his stablemate Altior, twice a winner of the Queen Mother Champion Chase, made his fencing debut in the same race four years ago.

“Shishkin has done lots of schooling and he has been very good at it, but he has got to do it on a racecourse now like any other horse,” said his trainer, Nicky Henderson, who may not be entirely unhappy to learn that his horse will face 10 fences rather than the 12 that would normally be jumped in Monday’s race.

“He should be all right, as he has done nothing wrong, that’s for sure. There has not been one of his calibre we have sent chasing for a couple of years.” Bookmakers offer odds of just 1-5 that Shishkin can start his chasing career with a win.

Shishkin is a mighty talent and there’s no way I’ll be opposing him in the 1.25pm but odds of 1-6 make no appeal in the circumstances. A more interesting runner at Kempton is Mystical Clouds (2.35) in a later handicap chase.

Among those sold off by Trevor Hemmings in September, he is now with John Butler and put in quite a promising reappearance when staying on from the back into fourth at Stratford last month. He’ll be straighter for that and now returns to the course and distance over which he won on his last run for Alan King in February. He’s 13-2.

Morning Spirit (3.10) is a handicap hurdler, brought along steadily by Jonjo O’Neill and very interesting now that he steps up in trip and gets a decent surface for the first time. He’s shortened to 7-2 from 5-1.

At Musselburgh, Cremant (12.40) appeals as one who could follow up a recent success, at 3-1 or so. He finished strongly at Stratford a fortnight ago and an extra quarter-mile seems sensible.