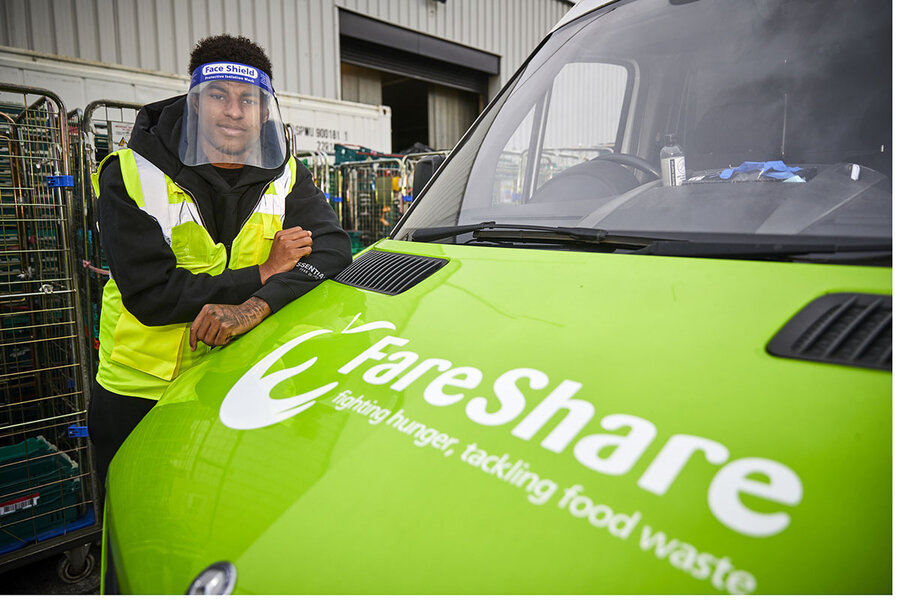 Jason Stephens remembers the hunger pains and sleepless nights following his release from jail in 2015. Unable to find work, he eventually purchased a food truck instead and sold burgers on the streets.

Fast-forward to a cold night in Britain’s second coronavirus lockdown, Mr. Stephens drives the same truck into the heart of Cardiff’s most deprived neighborhoods, handing out a thousand hot meals to children. “I was watching everyone losing their jobs in lockdown and kids going hungry,” says the Welshman. “How can that happen in modern day Britain?”

Mr. Stephens cooks and prepares food donated by Asda and Morrisons, two of Britain’s biggest supermarkets, before pulling up outside to deliver sausage, potato mash, and a traditional roast dinner from the truck, to children going hungry without their state-provisioned school meals over the late October break.

He, and hundreds of other businesses, are acting to remedy a Dickensian issue brought to the fore by the pandemic. More than 4 million children live in poverty in the United Kingdom. And while it is not a new problem, it is one that had been largely hidden from public view before the pandemic, when associated shortages amid lockdown brought the issue into stark relief.

But while the government has been slow to respond to the crisis, particularly as the threat of new midwinter shortages approach, British businesses and volunteers are tackling the problem head-on.

About 1 in 7 children in the U.K. claim free school meals, which are available to households earning under £7,400 ($9,750) a year. Charities say the low threshold means many children in slightly higher-income households, but below the U.K.’s average income of £30,800, are ineligible for state help, forcing families to survive on food banks.

Hayley Steere, founder of Free-My-Meal, a national charity linking people who need food with those willing to cook it, remembers the humiliation of forgoing meals as a single mother working three jobs, over a decade ago.

“I remember having a huge packet of crisps for dinner every night. I thought that was okay but it clearly wasn’t,” says Ms. Steere. “I lost my choir business at the beginning of lockdown, but if I was in that situation as a single mother on benefits still, I’d need a food bank.”

The person perhaps most responsible for bringing Britain’s poverty crisis to widespread public attention is Marcus Rashford, a soccer player known for his quiet, steely determination on the pitch for Manchester United.

Mr. Rashford successfully lobbied the U.K. government to make a U-turn and extend free meal provisions for children in low-income households over the school summer holidays, when otherwise they might lose that vital food source amid the pandemic. He set up a child food poverty task force and repeated the clarion call again in October, urging Prime Minister Boris Johnson to extend food provisions over the autumn and winter school break. Pressured by Mr. Rashford’s campaign, Parliament voted on the proposal, but ultimately rejected it.

Although the prime minister has recently done another about-face, in the form of £170 million of extra funding for free school meals, anger and action had already spread across Britain. Some businesses opted for symbolic measures: One Yorkshire pub owner banned the local member of Parliament, Chancellor Rishi Sunak – one of the 322 MPs who voted against free school meals – from entering.

“I didn’t know who [Mr. Rashford] was until I started doing this. I’m not a football fan, but my wife and mum told me about his work and it gave me the kick I needed to do something,” says Mr. Stephens, in Cardiff. “When the government voted against giving free school meals to kids, I thought, ‘Let’s go feed children ourselves.’”

Using donations from Britain’s biggest supermarkets, he got the owner of a local restaurant to help with the menu. “We hired a fridge and 24 hours later, we were cooking all through the night,” he says. “We tried to replicate what kids were eating at school. It might be their only healthy meal of the day.”

Working closely with local schools, the grocery store owner set up a text service contacting families in receipt of state-provided meals and has delivered 3,000 meals across East Lancashire.

He fears the lockdown has pushed people “who’ve never experienced hunger before into food poverty.”

“It’s worse than I imagined it to be,” says Mr. White. “Mothers and kids have been in tears on doorsteps because they were hungry.”

An alternative to the food bank

Critics argue food banks are an inefficient way of fighting both child and food poverty. In Waltham Abbey, a small town on the London-Essex border, Pesh Kapasiawala opens his door to a space that resembles something more like a supermarket. His belief that food banks are “undignified and traumatic” led him to opening community hub 3Food4U in August. Locals queue up to pick out fresh fruit, pastries, and clothes donated by supermarket giants Marks & Spencer, Asda, and Morrisons that would otherwise end up in landfill.

Mr. Kapasiawala says food banks have a bureaucratic profile, often relying on local authorities to assess recipients, which means people “can’t just turn up … it’s not somewhere where you want to take kids to.”

At his food hub, recipients have the freedom to choose items as they walk around, including a shelf stocked with children’s toys.

About 250 families a week visit his “community surplus hub.” Young professionals, nurses, and teachers with young children browse items, saving them up to £60 on weekly shopping expenses.

With further economic concern on the horizon, Ms. Steere is well aware that Britain’s poverty trap looms precariously close to many on so-called middle-class incomes. Near her Surrey home, she received a call for emergency food from a resident living in a family-sized cottage that appeared in a Hollywood film.

“It doesn’t matter what you look like, or who you are. I’ll never judge if you’re going hungry.”