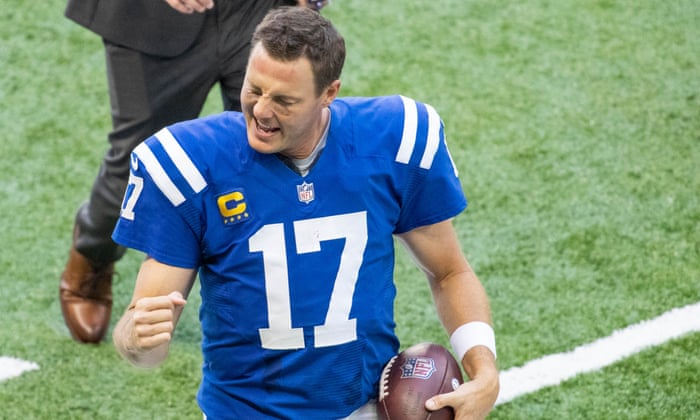 Philip Rivers is probably going to the Hall of Fame. The main obstacle is that he has played the entirety of his career at the same time as multiple other great quarterbacks. He has never been to a Super Bowl and has never even had an individual year where he was the clear-cut best quarterback in the league. Yet watching Rivers, in the twilight of his career and clearly not fully healthy, lead the Indianapolis Colts against Aaron Rodgers and the Green Bay Packers was a reminder that he really is one of the greats.

One reason that Rivers doesn’t quite get the love of those of his contemporaries is that he’s never been one who makes the transcendent look routine. In fact just the opposite: few other NFL greats make one aware of the amount of effort and energy that they put into everything he does. Even his throwing motion is ragged and agonized compared to the easy sling of a Tom Brady or Patrick Mahomes.

Every Rivers game (hard-fought win or brutal loss) is something of a wringer, including the Indianapolis Colts’ 34-31 overtime win over the Packers on Sunday. Before the Colts’ game-winning field goal, those who have watched Rivers down the years might have covered their eyes, like movie-goers spotting a necking couple in a Friday the 13th sequel waiting for something to go wrong.

That is the book on Rivers: capable of putting up Hall of Fame numbers but always coming apart when the game is on the line. It didn’t help that until last year his fortunes were tied to those of the Chargers, a team whose misfortunes have become infamous. Even those who have come to dislike Rivers, a polarizing player due to his lack of postseason success and his on-the-field demeanor, may smile at the quarterback’s success with his new team, who are in a good position to make the playoffs.

What’s that about his demeanor? Well, the thing about Philip Rivers is that he’s competitive, to comical proportions. He yells and hollers like he’s in an 80s hair-metal group (although the highly religious Rivers keeps it G-rated). He is prone to temper tantrums and his facial expressions have been a nonstop source of speculation, interpretation and memes. And that’s before we get to the bolo ties and the belt buckles.

Which Rivers look is your favorite? #FashionFriday pic.twitter.com/fqRBDYB7eO

In other words, Rivers never looks like he’s merely out there to have fun: this is his job, he is at work, and there’s a lot of his plate. He has the frantic air of somebody putting up long hours at a highly stressful job, which is … accurate. It’s not always fun television, although there’s certainly drama to his games. It always made the Chargers’ last-minute disasters much more fascinating knowing that he would be part of it, that all of that intensity would go unrewarded by the Football Gods.

The win over Green Bay felt like a too rare vindication for Rivers. It wasn’t easy, but it wouldn’t have felt right if it had been. There needed to be odds to overcome as well as a moment where it was very clear to the Colts how they could lose: the win required both building a comeback and snuffing a comeback partially put together by Rodgers, one of those quarterbacks who will have a much easier time to make the Hall of Fame (although he does share Rivers’ weird intensity). At the end of the game, Rivers, 38 years old and fighting through the pain of a foot injury, went 24-of-36 for a total of 288 yards, throwing three touchdowns and just a single interception. On Sunday, he got the individual stats and he got the team win. And if he didn’t make it look effortless, well, when had he ever promised that?

Here's the old "Offensive team fumbles into end zone on 4th down, defensive team seems to recover only to fumble, defensive team recovers again and safeties themselves, but safety is called back and play is ruled a touchback for defense" play #Bengals #WFT pic.twitter.com/ZU9l3jJwVP

If you can’t figure out exactly what is going on in this highlight (lowlight?) during Sunday’s Cincinnati-Washington game, you are not alone. This is how it was officially recorded in the play-by-play:

Here is the NFL’s official description of that play in CIN-WAS. As succinct as it can be…. pic.twitter.com/nPre1kKHWi

It was, as it turns out, a chaotic and event-filled game. Unfortunately for the Bengals, they lost starting quarterback Joe Burrow: he was carted off the field with a leg injury during what was a particularly costly 20-9 loss. The No1 overall pick in this year’s draft appeared to confirm he won’t play again this year shortly afterwards:

Thanks for all the love. Can’t get rid of me that easy. See ya next year✊

It was a devastating moment, one that (in what seems to also be an ongoing theme this year) distracted from one of the more positive stories in the league. Washington’s win ended up being the first for quarterback Alex Smith in two years. Smith, as you may recall, has returned to the league despite an injury that put his life at risk.

Derrick Henry, RB, Tennessee Titans. Sometimes the MVP is less about overall performance and more about coming through when your team needs you most. It’s hard to name a running back who is more important to his team than Henry, and he reminded everyone of that fact with this 29-yard rushing touchdown that clinched an overtime win over the Baltimore Ravens.

“I had a dream you were playing for the Panthers,” – Tamicha Drake to her son, NFL quarterback PJ Walker, around this time two years ago.

The moral of the story? Listen to your parents. Walker, when his mother had that dream, was with the Indianapolis Colts and had never appeared in an NFL game. His most recent experience was with the XFL’s Houston Roughnecks, back when that league still existed. Yet, there he was this Sunday, fulfilling his mother’s dream by starting for a sidelined Teddy Bridgewater against the Detroit Lions.

Despite his last-minute call-up, Walker threw for a touchdown and for 258 yards, which ended up being enough to secure the victory. 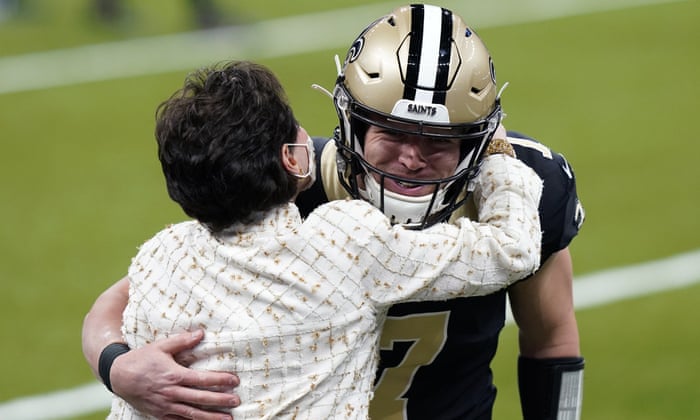 1-0. That is now Taysom Hill’s record at starting quarterback. When the New Orleans Saints officially went with the super-utility Hill as the starter, bypassing nominal quarterback Jameis Winston, it instantly made their game against the Atlanta Falcons compelling. The gamble paid off, as Hill ran for two touchdowns while throwing for 233 yards in the 24-9 win, although those hoping he would show off his arm with a successful end zone toss will have to wait another day. One imagines Hill will start the Saints’ next game with Brees not scheduled to return until Week 14.

— How not to pull off an onside kick, courtesy of the Jacksonville Jaguars:

Here's the onside kick "attempt" by the Jagspic.twitter.com/xJnExClpXw

The Steelers, well, they ended up being able to guess a lot of the Jaguars’ moves, and beat them 27-3, improving Pittsburgh’s record to 10-0.

— It looks like it’s between the Jags (1-9) and the Jets (0-10) for the No1 overall pick in next year’s draft. The Jets, for once, weren’t awful in their 34-28 loss to the Los Angeles Chargers, for whom Justin Herbert once again looked like a future star of the league.

— The only scoring in the first half of the game between the Cleveland Browns and the Philadelphia Eagles came from a Sione Takitaki’s pick six and the subsequent extra-point by Cody Parkey. Still, somehow, the score ended up being 22-17 to Cleveland at the end of a rather more eventful (if not necessarily entertaining) second half. The Browns crawled their way to second place in the AFC North thanks to that win, combined with the overtime loss of the Baltimore Ravens to the Tennessee Titans. Maybe this is actually going to be Cleveland’s year …

— The Houston Texans’ Deshaun Watson threw for 344 yards and two touchdowns, going 28-for-37. He didn’t get sacked at all and was untroubled in the second-half as the Texans added two field goals, which was enough to keep the Patriots at bay. Houston won 27-20. Meanwhile, New England lost running back Rex Burkhead to what could very well be an ACL tear.

— More injury news! The Titans lost inside linebacker Jayon Brown to an elbow injury. He has accumulated 76 tackles so far this season, so this could be a key loss as the Titans aim for a playoff slot.

How Allyson Felix could make history at the Tokyo Olympics