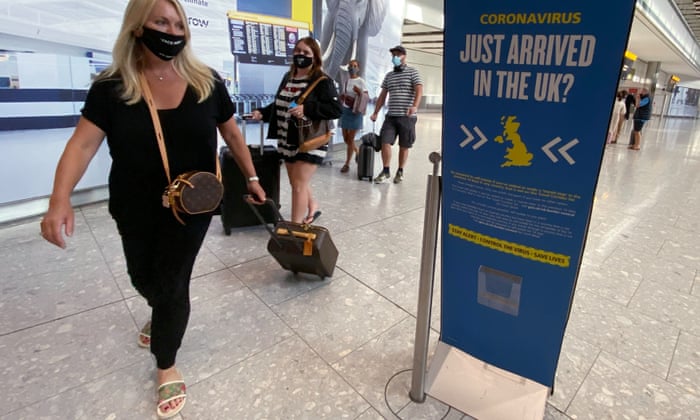 The two-week quarantine period for international arrivals to England is to be cut to as little as five days next month, with travellers allowed to leave self-isolation after a negative Covid-19 test.

The government said the new “test to release” regime would be in place from 15 December.

Airlines said it was “light at the end of the tunnel” for the struggling travel industry, but said most travel would only return when a pre-departure testing regime was in place.

Passengers who choose to use the scheme must book a test before travel – and pay for it privately – from a list of government-approved suppliers, which has yet to be published. The cost is likely to be between £65 and £120.

Anyone arriving in England by plane, ferry or train will still need to complete a passenger locator form and self-isolate for five full days before taking a test.

The transport secretary, Grant Shapps, said the plan would “ensure that our route out of this pandemic is careful and balanced, allowing us to focus on what we can now do to bolster international travel while keeping the public safe.

“Our new testing strategy will allow us to travel more freely, see loved ones and drive international business. By giving people the choice to test on day five, we are also supporting the travel industry as it continues to rebuild out of the pandemic.”

A travel taskforce, chaired by Shapps, reported to the prime minister earlier this month. Shapps’ view is that a test after five days of self-isolation would give more accurate results and reduce the risk of false negatives, compared with a test on arrival favoured by airlines and airports. The government has pointed to the examples of Germany and Iceland, which amended test-on-arrival regimes in favour of a similar delayed test.

Both British Airways and Virgin described the move as a significant step in the right direction, but said a pre-departure testing regime was needed.

Airlines UK said the move should cause a tentative rise in demand. Tim Alderslade, the industry association’s chief executive, said: “That said, a test at day five does not get rid of quarantine and that’s why we look forward to working with government to move towards a pre-departure or domestic testing regime. But there is now light at the end of the tunnel.”

The travel association Abta said it would make travel more attractive and manageable but there was “still more work to be done to support the recovery of the sector, including having a testing scheme in place for Scotland, Wales and Northern Ireland.”

Iata said it was finalising a digital “travel pass” that could, with governments’ agreement, allow passengers to store all vaccination or testing information along with travel documentation and tickets, allowing more contactless travel at airports and reducing the risk of the virus spreading.

Meanwhile, the UK government has announced more financial support for struggling airports and ground handlers in England with a scheme, starting in 2021, that would address fixed costs and be equivalent to their business rates.

With a cap of £8m per business, it is likely to be welcomed by smaller, regional airports but represents a fraction of the money sought by Heathrow, which has been lobbying to waive its rates bill of more than £100m annually.

The aviation industry has criticised the lack of government assistance, after hopes were raised by the chancellor, Rishi Sunak, early in the pandemic that bespoke help would be offered. However, Sunak said the government had supported the industry “throughout this crisis through the job retention scheme, loans and tax deferrals”.