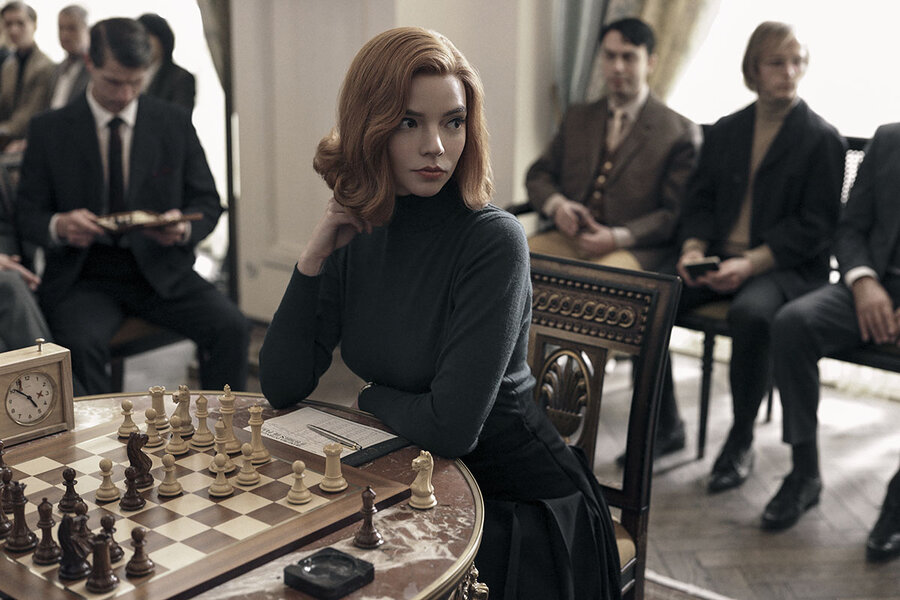 “The Queen’s Gambit” is an anomaly in our pop culture Tower of Babel. At a time when television audiences seldom speak the same language – we’re all watching different shows and subscribing to different streaming channels – the Netflix miniseries about fictitious chess prodigy Beth Harmon feels like a lingua franca. The world hasn’t paid this much attention to the game since American Bobby Fischer defeated Boris Spassky of the USSR in 1972.

What makes “The Queen’s Gambit” a universally resonant crowd-pleaser is that it’s about more than chess. All those moves on the board are a metaphor for the bigger game of life. The story asks whether achieving checkmate results in satisfaction. How does one attain fulfillment in life and, with it, find a sense of home and belonging?

For Beth, those questions loom large. Her story begins during the mid-1950s when, at age 8, she’s the sole survivor of a car crash. Dispatched to a Kentucky orphanage, she’s met by a prim and frosty headmistress. The dank institution resembles an Army barracks – but with even worse food. Each day, the children line up for a dose of tranquilizer pills. The young girl (played by Isla Johnston) becomes addicted to them.

It’s a relief, then, when a crack of light appears in the story. Beth ventures into the orphanage basement and comes across a lonely janitor (Bill Camp) playing a board game featuring 16 black and 16 white figurines. She’s eager to learn. A tender friendship blossoms between the taciturn mentor and the budding chess prodigy. Soon he’s introducing her to the chess club at a local high school. Playing multiple games simultaneously, Beth wipes out the older students like a bowling ball delivering a strike.

Stories about the rise of chess prodigies can be innately thrilling – see also, “Queen of Katwe” and “Searching for Bobby Fischer” – but “The Queen’s Gambit” ultimately demolishes the myth that raw talent, alone, is sufficient to get to the top. It’s a reminder that excellence requires work and practice.

Beth’s big break is that she gets adopted by a childless couple. At first, adoptive mother Alma Wheatley (Marielle Heller) can’t fathom why her teenager (now played by Anya Taylor-Joy) has a proclivity for chess. But when Beth returns home victorious from a local tournament with a cash prize in hand, Alma’s eyes light up. Soon, the teenager and mother are bonding by flying across the United States to tournaments.

The chess showdowns, in which players square off like gunslingers at high noon, are exhilarating. The camera often spends more time peering at Beth’s face than the thrust and parry of the pieces on the board. In a star-making performance, Taylor-Joy utilizes stillness to convey her emotions through her Bette Davis eyes. Marvel, too, at how the actress changes her character’s walk during her transformation from awkward teen to confident adult. As Beth reinvents herself, the handsomely filmed production revels in outfitting her with elegant costumes seemingly straight out of Jackie Onassis’ closet.

Yet, for all the 1960s glamour, there’s also a gritty storyline about Beth’s ongoing addiction to tranquilizers and alcohol. Walter Tevis, the late author of the 1983 novel from which the miniseries is adapted, drew from his own experiences of receiving heavy drug doses for a medical condition when he was a child. “The Queen’s Gambit” explores addiction within the context of characters seeking to fill holes in desolate lives.

In a telling scene, the young-adult Beth bumps into her former nemesis from high school, a popular queen bee named Margaret. During their unexpected meeting in a convenience store, Margaret tries to pretend that she has it all. She married her boyfriend right after high school and already has a baby. But there’s no coterie of friends with her. A few too many bottles of alcohol rattle in her shopping cart. Beth recognizes the quiet desperation in Margaret’s eyes because she’s seen it before – in her adoptive mother. Alma, too, relies on pills and alcohol to try to dull the languors of a life devastated by professional and romantic disappointment. Her other escapist vice? Mind-numbing television.

Beth consumes pills not only because she believes they make her a better player, but also as a way of fleeing the emptiness that comes from feeling abandoned. But there comes a point at which she must confront the question of whether her relentless, go-it-alone quest to reach the pinnacle of international chess will bring fulfillment. The risk is that she’ll end up a listless alcoholic like Alma.

By contrast, other characters in the story find meaning in their lives by reframing the relationship between success and connecting with others. Beth can either learn from their example or choose the Queen’s Gambit, a strategy that entails sacrificing a pawn in order to win. In the game of life, it’s her move. And also ours.

“The Queen’s Gambit” is available on Netflix. It is rated TV-MA and contains language, substance abuse, and sexual situations.