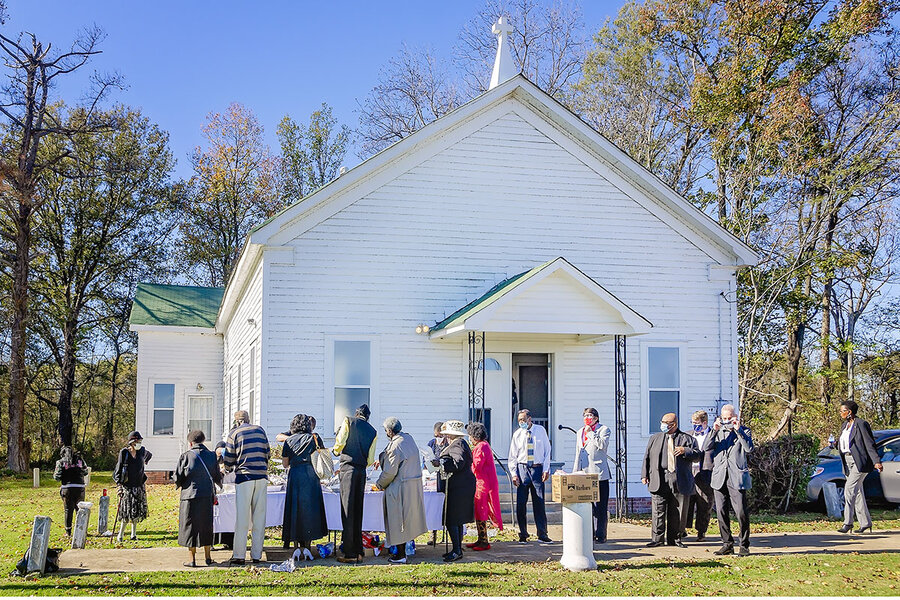 It’s a sleepy Sunday morning in Greenwood, Mississippi, and though it’s almost noon, Grand Boulevard’s antebellum homes stand in stately silence, not a soul stirring, not a leaf out of place on the manicured lawns. This is the postcard-perfect South, the oak-canopied, four-lane stretch of highway that the Garden Club of America called one of the most beautiful streets in the nation, the street so frozen in time that the DreamWorks film crew used it as the setting for Hilly Holbrook’s house in “The Help.”

At the edge of the muddy Yalobusha River, a historic marker notes the day Billie Joe McAllister jumped off the Tallahatchie Bridge. The four-lane becomes a two-lane. The sidewalks disappear. The rich black asphalt fades to gray. Lush lawns give way to endless fields now barren since the corn and cotton have been harvested.

This is Money Road, a pocked ribbon of asphalt that traverses some of the most storied land in the South, a sparsely populated route that hugs the dark Tallahatchie River closely and holds its secrets even closer. You won’t find a gas station here, and if you want a Coca-Cola, you’d best turn around. But thousands of tourists come here annually, seeking one of two places — Little Zion Missionary Baptist Church, where bluesman Robert Johnson is buried, or Bryant’s Grocery, where 14-year-old Emmett Till supposedly whistled at a white woman and was found in the river four days later with a 75-pound cotton gin fan tied around his neck. It was 1955, and change had not yet come.

Time moves slowly in the South, unspooling in fits and starts, two steps forward, one step backward, and three steps sideways, storms rolling in and out as regularly as the sun rises and sets.

At Little Zion on the morning of Nov. 15, interim Pastor Terrell Collins has storms on his mind. Though the church has been closed since March due to the pandemic, the congregation took a calculated risk to be together today for their 150th anniversary.

Almost everyone here knows someone affected by COVID-19, and no one complains as choir president Mary Hoover distributes masks as needed along with goodwill, making sure everyone is adhering to safety protocols.

This year has marked the first time Little Zion has ever closed since it was built by sharecroppers on the Whittington Plantation in 1870. In the turbulent 1960s, the church would be packed with locals who came to hear the Gospel and the latest news from the civil rights movement. Little Zion still lists approximately 70 members ranging in age from newborn to 89 on its rolls, but fewer than half are here today, with some choosing to stay outside for the service.

Mr. Collins opens his Bible to the Book of Matthew and begins to read the story of Jesus walking on the water. The disciples were in a boat and were afraid. When the disciple Peter stepped out of the ship to go to Jesus, he panicked and began to sink. Immediately, Jesus stretched out his hand and rescued Peter, saying, “O thou of little faith, wherefore didst thou doubt?” The winds stopped and the waters calmed.

The pandemic is a storm, Mr. Collins says. Police brutality against African Americans is a storm. Lynching was a storm. Slavery was a storm. But the church is solid. Storm-proof. God’s word does not falter.

“Lord, we’re leaning on you because you told us to,” Mr. Collins says. Murmurs of assent ripple through the sanctuary.

Like most people here today, Mr. Collins grew up in this church. He remembers sweltering summer heat and services that lasted until late afternoon, paused for lunch, then resumed. He knows the history of the church, the heritage it contains, the storms it still faces. But we do not live in a hopeless world, he says. God always provides.

“Being in the midst of the pandemic and other struggles going on nationally and internationally, we need to be encouraged that we’re going to make it through the storm,” Mr. Collins says after the sermon. “Storms don’t cease. Life doesn’t stop happening. Our faith in God is the thing that sustains us and gets us through.”

For these parishioners and others in the Black community, church is not only the spiritual foundation but also the center of daily life, providing education, fellowship, and the opportunity for self-expression. For the sharecroppers, it was a safe haven.

“Little Zion was the brightest thing in our community,” deacon Sylvester Hoover says. “We could sing our music; we could stomp; we could express our feelings. For Black people, the church is part of our culture. We have to have it. It helps us.”

The pandemic has taken a toll, Mr. Hoover says, but the members understand that safety is paramount. The worst part is not knowing when they will meet again. Usually Little Zion holds a special Christmas program, but that’s not likely to happen this year.

As the choir sang, Ms. Hoover caught sight of several white children peeking through the windows, just as they used to do when she was a child, and it made her smile.

She grew up on the Star of the West plantation, and she was glad to see Sunday’s turnout, including the handful of white visitors in attendance. People sometimes see the stark racial divisions in Greenwood and miss the progress that has been made within hearts and minds.

“We really care for each other and try to educate people,” she says. “We’re not trying to be fake. We’re trying to fix Mississippi so we can say that we DO love each other. If anyone ever wants to learn about race and how to overcome race, come to Little Zion Missionary Baptist Church. We teach love.”

That welcoming spirit is part of what inspired Mississippi District Judge Michael Mills to attend the 150th anniversary service.

Judge Mills leads a group of local culture buffs who he says “will go to absurd lengths” to learn about literature and the arts in Mississippi. Like many, he first encountered Little Zion when making a blues pilgrimage to musician Robert Johnson’s grave, but after attending his first service, he felt so welcome that he has made the two-hour drive down from Oxford, Mississippi, several times now and is working on a documentary about the church.

“I feel like Little Zion and other little Black churches like it are the last redoubt of the Gospel,” Judge Mills says. “They have no reason to be hanging on other than their faith.”

He enjoys the music, which he calls “otherworldly,” but there is something else that draws Mills and others like him — authenticity.

“The people at Little Zion are authentic,” Judge Mills says. “They are great souls to get to know, and that’s something hard to find in today’s world. They’re good people, and it’s a very important part of my life.”

But although visitors are frequent, in order for the church to survive the next 150 years, they will have to attract and keep the younger generation’s interest. The congregation skews heavily toward seniors, and as the population dwindles, current members try to mentor those who will someday take their places.

“God does not change, but his methodologies do,” Mr. Collins says. “This pandemic has taught us that we have to be multifaceted. Everybody is not going to come into the church, so even after the pandemic, the challenge is to remain viable and relevant, to be constantly evolving.”

A day of giving thanks

But today, the worries of the future have been set aside, and everyone is happy to see the dear, familiar faces and meet the newcomers who aren’t yet family but will be by nightfall.

A table outside sags under the weight of enough food to feed twice as many. As the children play tag in the cemetery, the adults line up for generous portions of smoked ribs, spaghetti, baked pork chops, fried chicken, turnip greens, cornbread, pineapple cake, and sweet potato pie.

It looks a lot like Thanksgiving, and in many ways, it is. After so many months of separation, everyone is grateful for this slice of normalcy. It’s like coming home from a long, arduous trip, knowing the time will go by too fast, trying to hang on to the knowledge that family is forever — in spirit if not in physicality.

Soon, they say, their words muffled by masks. See you soon. If not for Christmas, then next year, for sure.

As the Delta sky bleaches to chalk, the parking lot empties and the little white church on Money Road is silent again, save a scarlet red cardinal sitting on the bluesman’s headstone, singing against the gathering dusk.